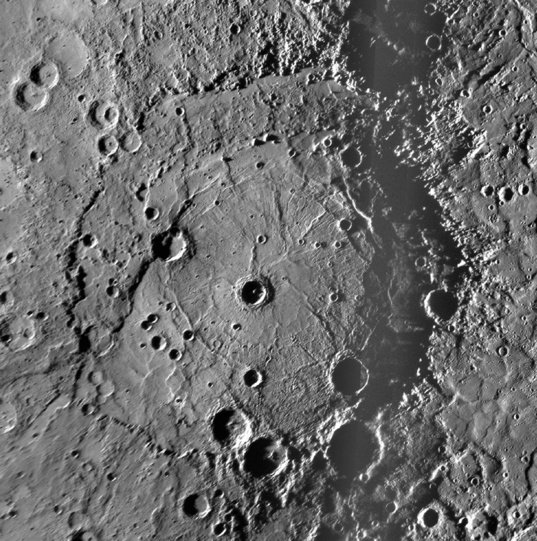 The outer ring of this crater is 715 kilometers in diameter.

Here's how the MESSENGER team describes the Rembrandt impact basin, which was not seen by Mariner 10, so was first observed during MESSENGER's second flyby:

The Rembrandt basin is remarkably well preserved. Most large impact basins on Mercury, the Moon, and other inner planets are flooded by volcanic flows that cover their entire floor. The number per area and size distribution of impact craters superposed on Rembrandt's rim indicates that it is one of the youngest impact basins on Mercury. Exposed in portions of Rembrandt's floor is terrain preserved from when the impact basin formed. In most large impact basins this terrain is completely buried by volcanic flows erupted long after basin formation. Volcanic material does fill the central area of the Rembrandt basin and was deformed by tectonic forces into a complex pattern of ridges and troughs. Ridges formed during subsidence and contraction, and troughs formed during uplift and extension of the basin floor. Both types of deformation occurred after the interior volcanic flows were emplaced.

The left part of the image was taken on October 6, 2008, as MESSENGER approached for its second flyby; at the time, the crater was disappearing into the sunset on Mercury's terminator, and the right edge of the crater was in darkness. The right part of the image was filled in with data from the departure view from MESSENGER's first flyby on January 14, 2008, when almost exactly the opposite hemisphere of Mercury was in sunlight. MESSENGER got photos of very nearly all of Mercury during its three flybys, but images like this one provide one example of why the data from the orbital mission will be a major improvement: MESSENGER will map all of the planet at consistent solar illumination angles, which will provide a better base map for scientific analysis. Actually I am quite amazed by how well the two parts of this image match up!