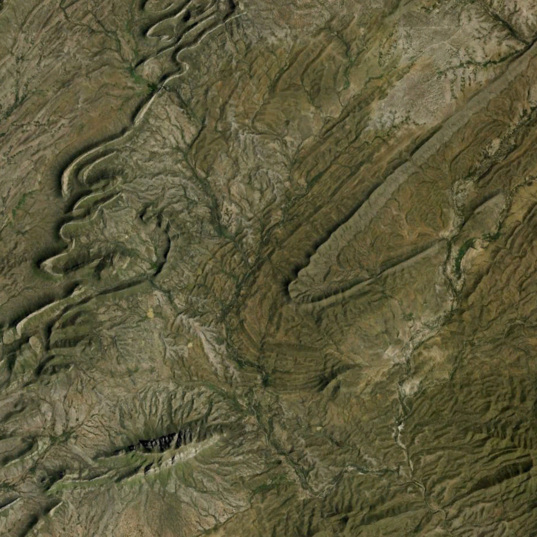 The area is shown at a resolution of 17 meters per pixel and covers an area about 15 kilometers square.

This photo is to remind us where we're coming from, of the geologic playground that we have on Earth. These folded mountains lie within the Marathon Basin in western Texas, an area that's amenable to geologic mapping from above because it's mostly unvegetated. All of these mountains are made of sedimentary materials that were flat and widespread when they formed, but which have been severely folded, faulted, uplifted, and eroded since they originally formed. The rocks weren't melted, but they were subjected to high heat and pressure over a long period of time, while deeply buried in the crust, so that they deformed like clay in response to compressional forces squeezing on them from the side. The large U-shaped fold is formed in limestone, shale, and sandstone type rocks, while the squiggly mountains in the west are made of an unusual sedimentary rock called novaculite, a highly silica-rich material thought to be formed by the alteration of chert.

This photo is special to me because Landsat images of the folded mountains shown here were the very first space images that I ever processed, when I participated as an undergraduate student in a program run by the Keck foundation on "Geologic Remote Sensing and Multispectral Image Processing," held at Trinity University in Texas in the summer of 1994. It'd be four years before I processed another space image, as a grad student, but it's safe to say that this program opened my eyes to the potential of spaceborne imaging for helping us understand the broader context surrounding the view that a field geologist gets from the ground. At the same time, because the program included a field component as well, I gained an appreciation for how little we can see from space and how important it is to have ground truth. Ultimately, this program is what taught me to appreciate images as data. Here is the paper that my partner and I wrote at the end of that project.