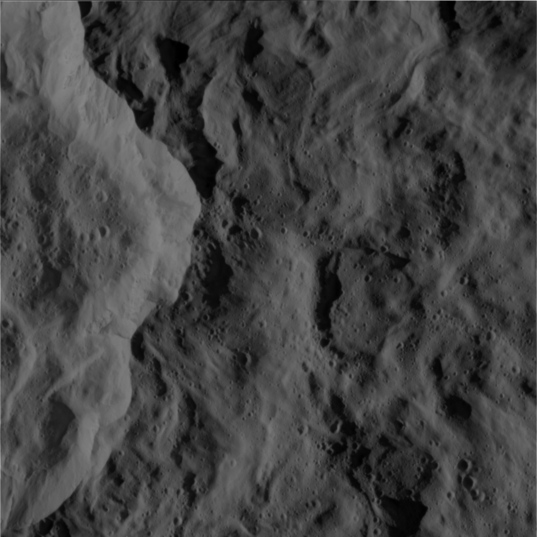 Resolution of the image is about 32 meters per pixel, and it covers an area about 33 kilometers square.

You're looking at a tiny portion of the crater formerly known to most as the "splat" on Saturn's moon Rhea, but which (as of this year) finally has a formal name, Inktomi. Cassini captured this image as it was shooting past its first targeted flyby of the moon, on November 26, 2005; its range at the time that this image was taken was a mere 531 kilometers from Rhea. Although Cassini got closer to Rhea in a 100-kilometer flyby in March of this year, the image above remains pretty much the highest-resolution view of the moon ever taken. And -- coincidence! -- the mission released a spectacular pair of mosaics from the March flyby today, one of them in 3D, so get your glasses.

Rhea is a battered moon but this image shows a relatively crater-free area, part of the Inktomi crater (whose scarp and floor make the left side of this image) as well as part of its continuous ejecta blanket, which spreads across most of the view. The continuous ejecta blanket is a deposit of material that was excavated from within the crater during the impact. It covers up preexisting terrain (thus, "blanket") and has that characteristic rumpled texture made of hillocks and waves of solid material that lie where they fell to the ground. Superimposed on the rumpled blanket are spatters of smaller craters, whose clusters and rows make it pretty clear they are secondaries, formed when a more distant impact scattered boulders over a longer distance before they fell. The Inktomi impact certainly produced their own secondaries, but they're farther away from the original crater, part of the less continuous, distal deposits.

I just checked the Cassini tour page and realized that there's an even closer targeted flyby of Rhea coming up very soon, on January 11, 2011, at a distance of only 76 kilometers!