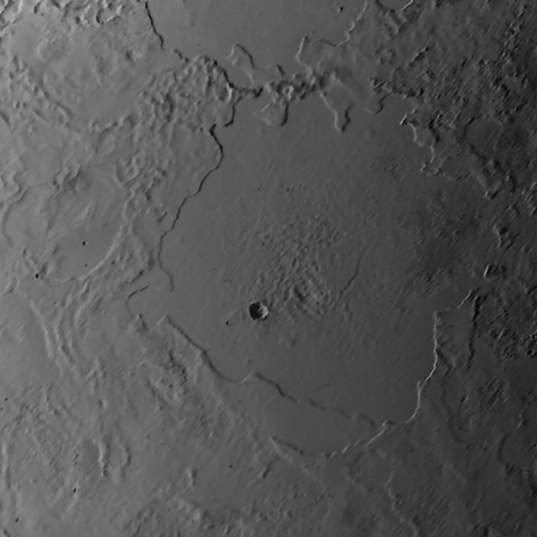 The smooth-floored depression with an irregular outline is named Ruach Planitia, and contains one of Triton's few named impact craters, Amarum. Ruach is roughly 200 kilometers in diameter; the whole image is about 250 kilometers square.

Of all the places I'll be showing you throughout December, this one is the most like the current best guess for what the surface of Pluto will look like when New Horizons passes by it. It's not Pluto, but it's just about as far away: it's Triton, Neptune's largest moon, and the only major moon in the solar system that orbits its planet in the opposite direction to which the planet spins. That strange configuration suggests to scientists that Triton formed elsewhere -- like in the Kuiper belt, with Pluto and Eris and Haumea and friends -- but was captured into Neptune orbit. The tidal forces associated with this capture would have flexed and heated Triton, resulting in global volcanism. In fact, Triton's surface is noticeably lacking in craters, as I've mentioned here before.

There's one obvious crater in this photo, Amarum, one of nine named craters on Triton, and a few little pinpricks of smaller ones. The dominant feature on this photo is an irregularly-shaped closed depression named Ruach Planitia, with a mottled center that is named Dilolo Patera. The idea is that Dilolo represents a place of past volcanism on Triton, where a mix of liquid water, methane, ammonia, and nitrogen bubbled out onto the surface, making the smooth plains we see filling the floor of Ruach. It's a nice story but I can't help but feel that the naming of Dilolo as a Patera expresses more confidence in the truth of this story than I think is justified from the limited data available. But it's not like anybody is sending another spacecraft to Triton any time soon; we do what we can with what we have!