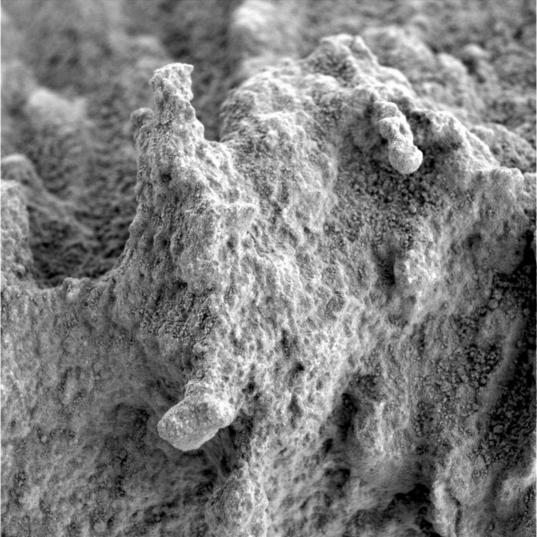 Spacecraft cover great distances in open space to reach the planets and moons and smaller things that they explore. Yet the vast majority of them still stand quite far away from their targets, in human terms anyway, when they take their pictures, usually at least a few hundred kilometers away and often much farther. Landers like the Mars Exploration Rovers are so special because they actually bring us to places on other planets with human-scale objects and distances, and sometimes even closer. Spirit's microscopic imager, which works like a geologist's hand lens to magnify rocks and soil, captured this view on sol 162 (June 17, 2004), just after the rover reached the base of the Columbia Hills. Eons of weathering in Gusev crater's sandblasting winds have left small nuggets of material standing on the tips of thin rocky stalks above Pot of Gold's surface. The rock proved to contain hematite, the first indication of that material at Spirit's landing site.