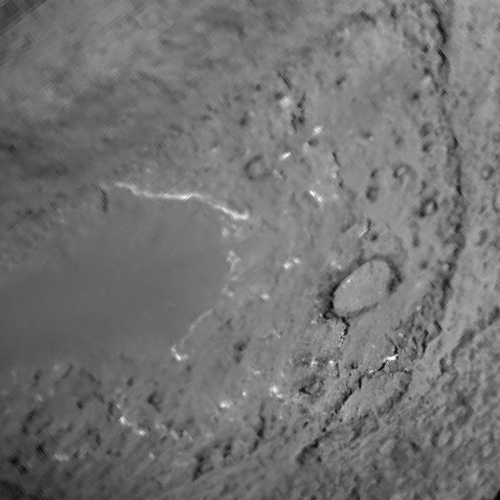 The image has a resolution of 6.3 meters per pixel and covers an area about 3.2 kilometers square.

This view of the pitted nucleus of comet Tempel 1 is composed of many frames captured from different ranges by Deep Impact's Impactor spacecraft as it approached for its July 4, 2005 encounter. Images of the whole comet nucleus were taken from a greater distance and so are blurrier; highest resolution images were captured of the bottom half of the nucleus (lower right corner of the image; I rotated the view so as to fill the frame with comet rather than black space). The crash site was between the two circular features at the center of the image, which are thought to be impact craters. There's what looks like a retreating tongue-shaped scarp of material with a smooth top at the left center of the photo. Stardust is now on its way to Tempel 1 for the first-ever second visit to a comet; its encounter is only six weeks away, on February 14/15, 2011.