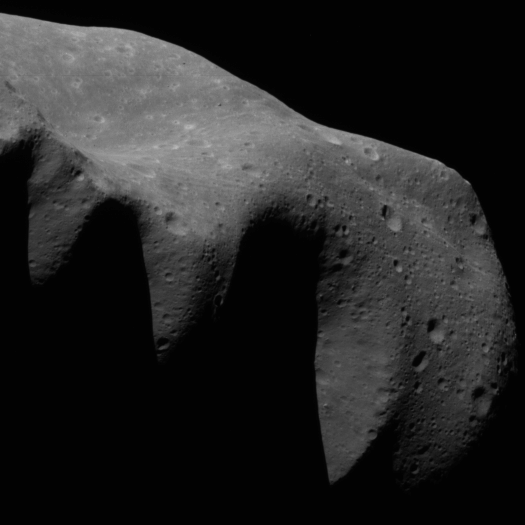 This image has a resolution of 31 meters per pixel.

With a view that shows this much of the body of this solar system object, you'd expect it to be quite recognizable. But I certainly wouldn't have identified this image correctly. It's a photo of asteroid (243) Ida, captured by Galileo on August 28, 1993. Ida is 56 by 24 by 21 kilometers in diameter. Pretty much the only photos of Ida that ever get posted are Galileo's global views, like the one included in my asteroid and comet montage. If you compare this image to that one you can see how it's just a bit of Ida's nose. This is a single frame from Galileo and is a good example of how unfamiliar things can become when you get closer to them.

In terms of what's visible in the image, the cratered plains look surprisingly lunar to me, and they are ancient; the age is estimated to be older than a billion years. Ida is big enough that ejecta tossed out of impact craters eventually re-accretes on the asteroid, making a deep regolith, which is responsible for that soft, lunar-like appearance. ("Regolith" is a geologic term for a layer of loose, broken rock and gravel that overlies solid rock; it's the term used for the Moon where you might use "soil" on Earth. "Soil" implies an organic origin.) But then there are Phobos-like grooves, or at least hints of them, and glimpses of what must be huge ejecta blocks lying around on the surface.