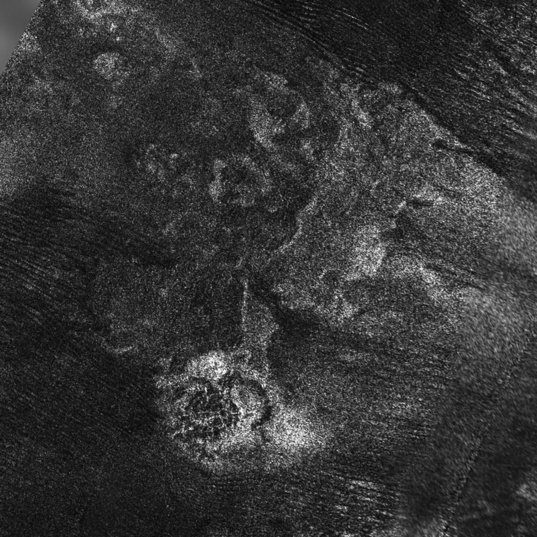 Image scale is 350 meters per pixel, and the entire image covers an area about 310 kilometers square.

You're looking at Sotra Facula, which scientist Jeff Kargel just described in a press briefing on Monday as "the best example of a cryovolcanic mountain on Titan and in the outer solar system." People have been hunting for volcanism on Saturn's moon Titan since Cassini arrived, because the methane in its atmosphere should be rapidly destroyed by sunlight, so something must be replenishing it. It was once hypothesized that Titan was covered with a methane ocean, but now we know it's mostly desert-like, covered with sand dunes, with only small patches of liquid methane mostly confined to the north pole. Another way to replenish atmospheric gases is to spew them out from volcanoes. It's been hard to spot volcanoes or anything else on Titan because of its thick, opaque atmosphere; Cassini's cameras can barely penetrate the haze and get much fuzzier views of the surface than they do of other icy moons, while the spectrometers aren't able to conclusively figure out the composition of the surface because of the way the atmosphere confounds the signals. Cassini's RADAR instrument gets the sharpest views, like the one above, easily penetrating the atmosphere (and even a few centimeters or more into the surface), but RADAR images are not straightforward to interpret, and there hasn't been a paper identifying a volcano on Titan yet that has convinced everyone, though there have certainly been several possible volcanic constructs that have been identified in peer-reviewed papers.

The difference at Sotra is that we have topographic information. Topography -- the shape of the landscape -- is usually acquired for solar system objects by obtaining two images of the same spot from slightly different look angles. There's so little overlap among RADAR images that we don't have much topographic information for Titan, but there's a crucial overlap between two RADAR swaths here, and that provided the data that Randy Kirk at the USGS needed to create this 3D view, which is narrated by Rosaly Lopes. What convinced Kargel that this is a volcano is the "juxtaposition of the highest and lowest topography on Titan. Few other processes can produce comparable structures. Depressions can be produced by impact craters, but Titan is a very sparsely cratered world, and it would be peculiar to have several depressions associated with mountains, so volcanism is the best explanation."

If this is a volcano, what is the nature of the lava that's coming out? That's a major unanswered question. It could be water. It could be ammonia-water. It would not be a stretch for it to be ammonia-water, since we see evidence next door at Enceladus for a body spewing out materials related to liquid ammonia-water in its interior. It could be water that contains dissolved methane and carbon dioxide, which would make it a "vesicular, frothy, pumice-like material." But on Titan it could also be hydrocarbons -- "paraffin, think softened candle wax, or polyethylene," Kargel said. "If this sounds like a stretch, we have [hydrocarbon volcanoes] on Earth; they've been documented in the Gulf of Mexico, where they're also associated with deep holes."

The image at the top was prepared for this article by Mike Malaska (thanks, Mike!) It combines data taken on the T25 and T28 flybys (February 22 and April 10, 2007). The T28 swath was warped slightly to match the geometry of the T25 swath. Small sections were brightened or darkened in an attempt to remove seams due to the RADAR beam overlaps and to balance the two swaths. Both swaths were contrast enhanced. A subtle banding that extends to from lower left to upper right is an artifact of the SAR RADAR technique.

The starfish-shaped object at the center is the main construct. The radar-dark "arm" that loops out to the right (East) and down(S) is a radar-shadowed topographic rim that surrounds a deep, kidney-shaped, radar-bright pit that extends 1500 meters deep. Radar-bright flows with diffuse edges extend beyond this pit and surround the complex. The entire construct is surrounded by a radar-dark dune sea made of organic materials, likely including benzene. Their east-west stripes indicate the prevailing wind direction. Some of the dunes appear to deflect along the south side of Sotra, indicating it is a topographic obstacle.Click here for a higher-resolution version covering a larger area.