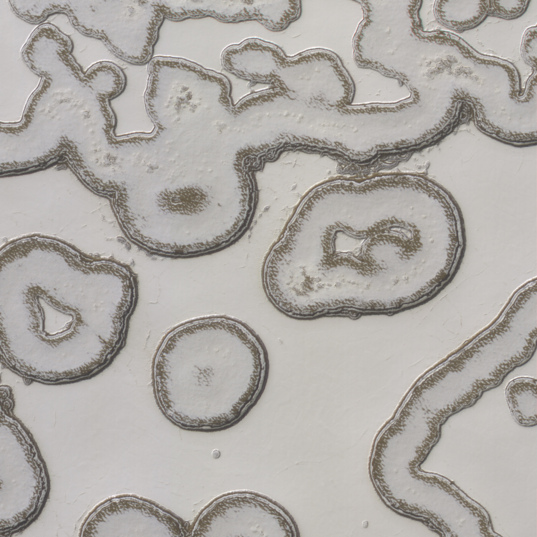 The image has a resolution of 52 centimeters per pixel and covers an area about 780 meters square.

This is the so-called "Swiss cheese" terrain of Mars' defrosting southern polar cap. The southern polar cap expands each year in the polar winter as a sizable fraction of the planet's carbon dioxide atmosphere freezes onto the ground. I'm going to shamelessly steal a bit of text from Ryan Anderson's Martian Chronicles blog (which recently moved to the AGU's stable of blogs-- congrats, Ryan!) to explain the origin of this terrain. In the text below, Ryan was describing a talk at a conference by Shane Byrne.

My favorite aspect of this image is its imperfectly fractal nature -- zoom in and you can see that there's at least two scales of these arcuate defrosting features. If you go check out the full image at the HiRISE website, you'll find that the Swiss cheese terrain was just tangential to the subject of the photo, which was actually an enigmatic circular feature within the residual polar cap that's been a mystery since Mariner 9 first imaged it.