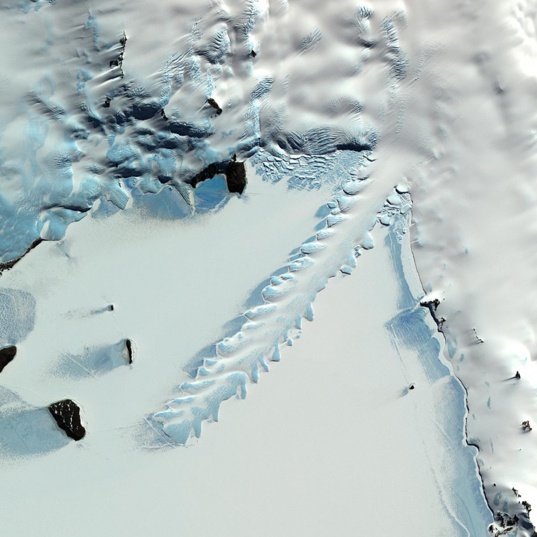 The full image covers an area about 18 kilometers square at 15 meters per pixel.

I know from comments on previous posts that several of you have been anticipating one of these: this image is from planet Earth.

We're looking at the Erebus glacier in Antarctica. Erebus glacier comes down from Mount Erebus (the world's most southerly active volcano) and protrudes off the coast of Ross Island, forming an 11 to 12-kilometer-long ice tongue out into McMurdo Sound. An ice tongue is a long and narrow sheet of ice projecting out from the coastline. It forms when a valley glacier moves very rapidly out into the sea or a lake. When the sea thaws in the summer, the ice tongue floats on the water without thawing. It also calves off in places, forming icebergs.

The Erebus Ice Tongue is only about 10 meters high, so its icebergs are small. When the ice around the tongue melts in the summer the waves of sea water constantly batter the edges of the tongue, carving very elaborate structures in the ice. Sometimes these pieces will calve off and sometimes the waves will cut very deep caves into the edges of the tongue. In the winter the sea water freezes once more around these new shapes. This ASTER image was acquired November 30, 2001. It is centered at 77.6 degrees south latitude, 166.75 degrees east longitude.

No other planet is currently forming landscapes that require a mix of frozen and melted water. But Mars bears lots of evidence for past glacial activity, and we should be on the lookout for landforms that may have been left behind by features such as this ice tongue, after Mars' climate locked into its current frigidity.

Thanks to Ashley Davies for sending this one to me; the caption is edited from the ASTER team's text.