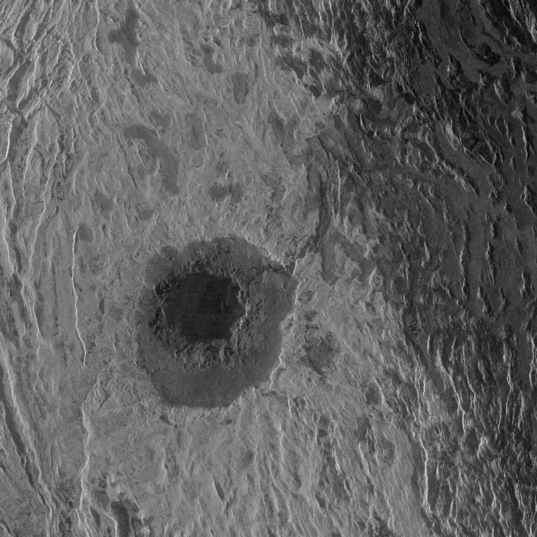 The image has a resolution of 225 meters per pixel and covers an area about 300 kilometers square.

Cleopatra crater is a double-ring impact crater that formed geologically recently on the high, mountainous plateau of Maxwell Montes in Venus' high northern latitudes. Maxwell Montes is made of numerous parallel furrows that are very brightly reflective to Magellan's imaging radar -- so bright, in fact, that they were visible as a radar-bright spot on Venus from Earth-based radio telescopes. The brightness is thought to be caused by the mountains being covered with an unusual material, such as pyrite, that forms when Venusian rocks interact with Venus' atmosphere at Maxwell's high elevation, 11,000 meters above Venus' mean. After Cleopatra formed, a river of lava breached its northeastern wall, running downhill onto the ridged plains to its northeast.

I know I've already done two other Magellan images in this series, but I'm having so much fun going back in to them -- it's one of the more underappreciated space data sets out there. One of my happiest memories from grad school is digging through cabinet after cabinet of 24-by-30-inch photographic prints from Magellan and discovering cool new features on each one. This was usually done while procrastinating from my real work, of course!