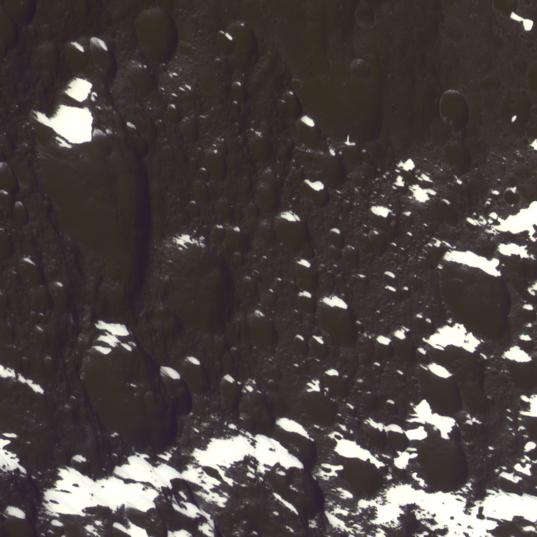 At full enlargement, this image has a resolution of about 92 meters per pixel and covers an area about 90 kilometers square.

At first impression, everything on Saturn's moon Iapetus is either black or white. But look closer, and you'll see a lot of variation in those "black" areas. Actually, there's variation in the "white" areas too -- which are really not white as snow, but a dingy gray -- but it's difficult to process images of Iapetus to show color variation in both light and dark terrain; in this image the white areas are mostly blown out, saturated to brightness.

This photo was taken during Cassini's one and only close flyby of Iapetus, in September 2007. It's just one footprint in a 21-frame color mosaic of the complicated boundary between Iapetus' dark leading hemisphere and bright trailing hemisphere; it's from an area of mostly dark terrain just to the south of the equator. (Find this frame under "trigger 2909" in this roundup of the Iapetus flyby images.)

When I look at this image, the first thing I notice is those bright splashes of ice. Then I notice all the impact craters. They're everywhere; this is an incredibly battered and ancient surface. Then I notice that the bright splashes of ice are on the upper (northern) sides of all of the impact craters. Since this is the southern hemisphere, that means the bright ice is preferentially found on pole-facing slopes. Finally, I notice that the floors of the craters appear strangely smooth, with material that's different in color to the dark material found in the inter-crater areas.

The dark material probably represents a deposit of something or other on the ice, but it can't be a thick deposit, or else those crater shapes would be obscured. As for the white stuff, it's hard to say from this image whether it's a deposit or just a place where no dark material has been deposited. According to the theory developed to explain Iapetus' black-and-white appearance, at this particular spot on Iapetus, the white stuff is a frosty deposit on the surface.