Time to open the second door in the advent calendar. Until the New Year, I'll be opening a door onto a different landscape from somewhere in the solar system. Can you guess where this crater-scarred surface lies? 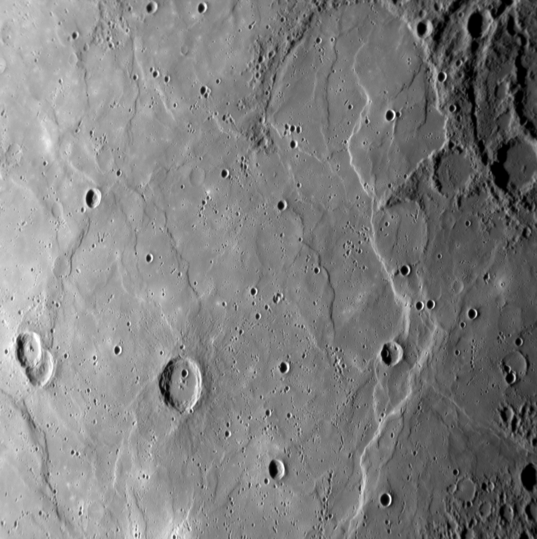 This type of smooth rocky plains, peppered with just a few, small impact craters, and cut by sinuous ridges, is ubiquitous among the terrestrial worlds of the inner solar system. In this particular case, it's Mercury as seen by the MESSENGER spacecraft, but you can find similar terrain on Venus, Earth, the Moon, and Mars.

The very smooth plains formed when lava poured out onto the surface of Mercury, relatively late in its geologically active lifetime. The liquid lava spilled into the floors of old craters, filling them up and obliterating all but the very largest ones. A couple of areas of more heavily cratered terrain that has not been filled by lava are visible in the upper and lower right-hand corners of this image. After the lava cooled and solidified into solid rock, all of Mercury continued to cool, and the whole planet shrank. Its old "skin" was then too large to stretch smoothly over its interior, and it wrinkled, making the ridges that cross the smooth plains. (In fact, the technical geological term for these features actually is "wrinkle ridges.") In several cases, the wrinkle ridges likely formed in places where the crust was already weakened by the presence of an old crater, otherwise invisible underneath the plains.

MESSENGER has passed by Mercury three times. It is on the final stretch of its long cruise to the innermost planet, and will hopefully become its first orbiter in 105 days, on March 18, 2011. Once in orbit, it'll systematically map the surface of Mercury with cameras, spectrometers, and a laser altimeter, the first-ever such systematic survey of the smallest planet.