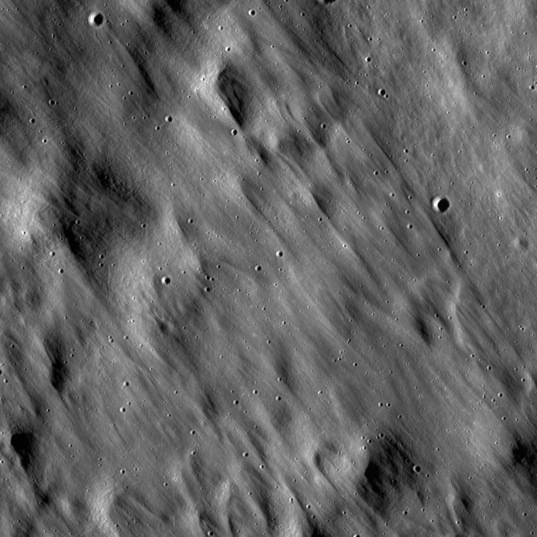 The image covers an area of about 1.2 kilometers square at 0.9 meters per pixel.

The thing that is responsible for the wispy, brushstroke-like texture on this part of the Moon's surface is far off the screen to the upper left: the impact crater Giordano Bruno. When that impact happened, huge amounts of debris sprayed outward in all directions, in a fluid curtain of uncountable numbers of solid rock particles. The fluid-like ejecta curtain diverted around obstacles as it moved and sequentially crashed to ground, planing the landscape in its path something like an Earthly flood of water, even though it was not melted. It's an astonishingly destructive force.

Since Bruno formed, the landscape has quietly acquired hundreds more, smaller impact craters, perfect little hemispherical holes in the ground at all scales. No matter how far you zoom in on the atmosphereless Moon, you'll always see more bowl-shaped craters.