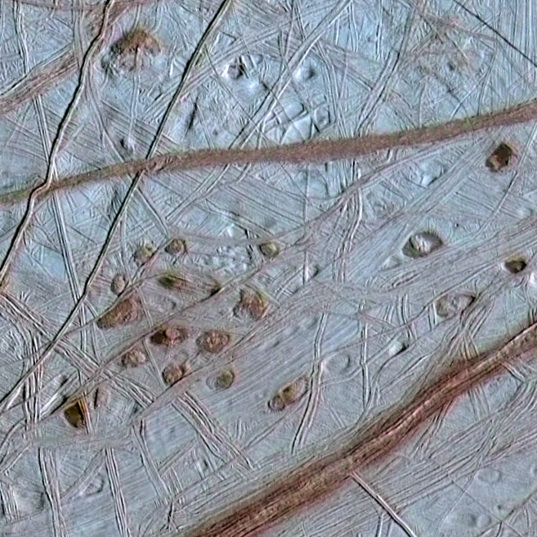 This image shows an area about 158 kilometers square at a resolution of about 240 meters per pixel.

These red spots, which are found on Jupiter's moon Europa, are referred to as "lenticulae." I was reminded of this cool picture when Jeff Kargel showed it in a press briefing at the American Geophysical Union meeting today as an example of possible (but controversial) example of cryovolcanism on Europa. (I hope to write about the subject of the press briefing -- cryovolcanism on Titan -- tomorrow.)

Many workers have suggested that these little odd-colored domes (they're about 10 kilometers across, so they're not that little, I suppose) result from material upwelling from Europa's ocean depths. Their circular shape and their distinctly different composition -- richer in hydrated sulfate compounds and carbon dioxide, among other things, than the surrounding area -- certainly argue in favor of them being squirted into place from beneath. On the other hand, other scientists have tried to figure out the physics that would drive their formation and have a hard time producing models that make so many features that are so small, so close together. They can get upwelling to happen in a model Europan crust, but it's broader and more diffuse in the models than the freckles you see in this Galileo image.

This is a combination of two Galileo images of Europa, one high-resolution view taken on May 31, 1998 during the 15th orbit of Jupiter, and one lower-resolution color view taken on June 28, 1996 during the first orbit. Despite the overall fuzziness -- a result, I think, of the extreme amount of compression that Galileo had to do to its images in order to squeeze them through its low-gain antenna to Earth -- I find the details within it to be really striking and puzzling. You can see lots of pits -- steep-sided, flat-floored depressions in the icy crust. Some of these pits have red, mottled deposits filling them, but some don't. In a couple of places, there is red discoloration with no corresponding pit. A couple of the lineae that cross the scene are red, but most aren't. On the left, one double ridge cuts across a red linea, while another double ridge is cut by the same linea -- wonderful crisscrossing superposition relations, a delight for any structural geologist. And the whole background is made of overlapping, bending, single, double, or multiple ridges.

Now that I've seen what Cassini has done at Saturn, I'm always a little saddened whenever I see Galileo images. The mission accomplished most of its goals, and the stuff it returned is incredible, but with a functioning high-gain antenna there could have been so much more, and there are so many discoveries waiting to be made and puzzles yet to be solved at Jupiter, its rings, and its moons.