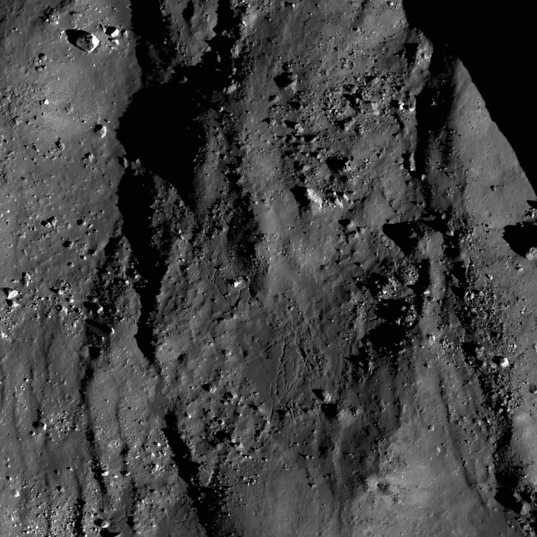 This image covers an area about 1.8 kilometers square at 0.96 meters per pixel when fully enlarged.

This photo is from the Moon. It's just a tiny piece of the vast treasure trove that is the Lunar Reconnaissance Orbiter camera's new view of the lunar landscape. From a distance, the Moon is old, cratered, and dead. But in a revolution that mirrors what Mars Orbiter Camera did for the perception of the red planet's dynamic geology, Lunar Reconnaissance Orbiter is changing the way we see the surface of our nearest neighbor.

This image is from the floor of Necho crater, a relatively recent 30-kilometer hole in the lunar highlands, and a favorite target for the camera team. They write that the bright rays of the crater and lack of superimposed impacts is evidence that Necho is a young, fresh crater. Its floor is flooded with massive amounts of "impact melt," interspersed with ridges of bouldery deposits. Impact melt is rock that was instantaneously melted in the tremendous energy of the impact. The melt pools in the bottom of the crater, perches on terraces, and flows down the flanks. Cracks, 10 to 15 meters wide, formed within the melt pools as it cooled and the crater floor was readjusting, springing back from the impact. The bouldery ridges are formed in rock that did not melt, but was instead folded and fractured in the force of the impact.