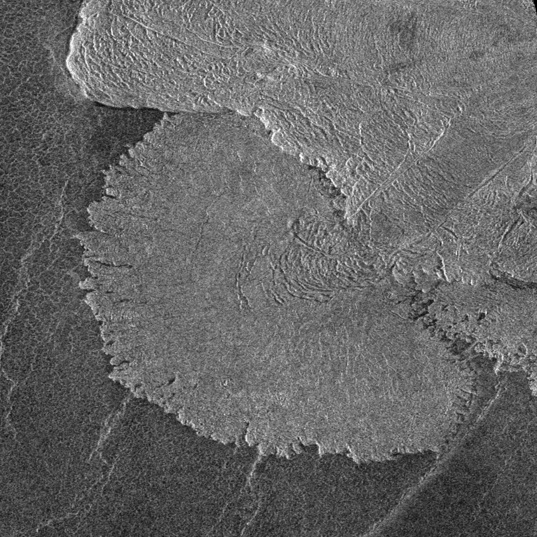 The image has a resolution of 150 meters per pixel and covers an area 127 kilometers square.

Once upon a time on Venus, a river of lava breached a solidified wall, pouring out into a nearly half-circular fan, the lava spreading out into finger-shaped mini-lobes before it finally froze into place. The volcano is between Artemis Chasma and Imdr Regio in Venus's southern hemisphere. The lobe stands about 500 meters above the plains on which it flowed. It's described this way in a 1992 paper (Moore et al.): "A fan-shaped lobe with small, digitate lobes along its margin that rests upon bright plains. Ridges within it are concave toward the central region near its juncture with the band, but they form radial patterns on the fan. Relief of the ridges appears to be less than 56 meters." The ridges, lobe shape, finger-shaped fronts, and other features all argue for this to be an effusive flow from a volcano with very viscous lava. You can also see nice polygonal cracking in the darker plains on which the fan has flowed. Those background plains are darker because they are smoother at Magellan's imaging radar wavelength, either because they were always less smooth or because the surface has been smoothed with time by some kind of erosion or windblown dust. The lava flows that the Venera landers saw were very smooth.

Every time I have cause to go back into the Magellan imaging radar data set, I am struck anew by how amazingly beautiful and surprising those images are. There's a relatively new way to explore the data set at mapaplanet.org; I highly encourage you to go visit Venus and appreciate how great a job Magellan did of mapping its surface!