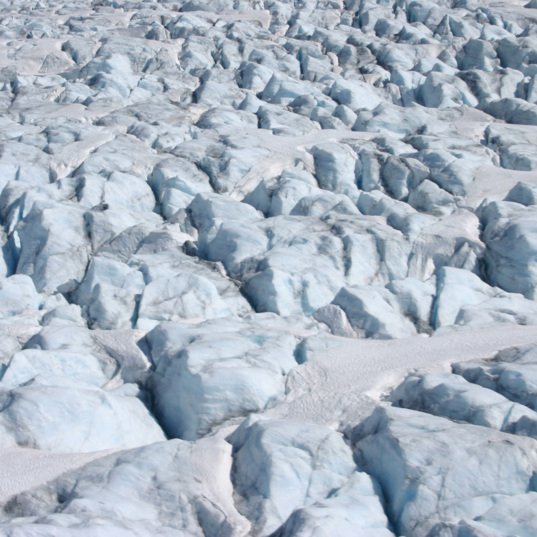 The large blocks in this image are tens of meters across, while the cracks between them are one to a few meters wide.

We're back on Earth again. This is an icy part of Earth, Llewellyn glacier, in British Columbia near the border with Alaska, which has been explored as an analog for the surfaces of icy worlds like Europa and Enceladus. You can tell it's glacial ice from its blue color; it was once compacted under much more ice above, which altered the crystal structure of the water molecules from their original form (loose aggregates of snow) to its present form, large, interlocking grains of ice, making it much like a crystalline rock. The blue color is the hallmark of these large grains.

Llewellyn is a glacier in motion, but its style of motion changes from its bottom (below what we can see) to its top. At the bottom, the ice is under great pressure, which helps it to flow downhill as a fluid, although a slow fluid. But near the top, without all that confining pressure, the motion of the glacier causes it to crack. In geologic terms, the bottom of the glacier is undergoing ductile strain, while the top is undergoing brittle strain. There's a similar transition going on between the brittle surfaces and ductile interiors of ice moons like Europa and Enceladus, and it's helpful to study such environments on Earth, where they're a bit easier to access.

Thanks to Bob Pappalardo for the photo!