The Downlink: Mars Rover Unpacked in Florida, New Data from Search for Life 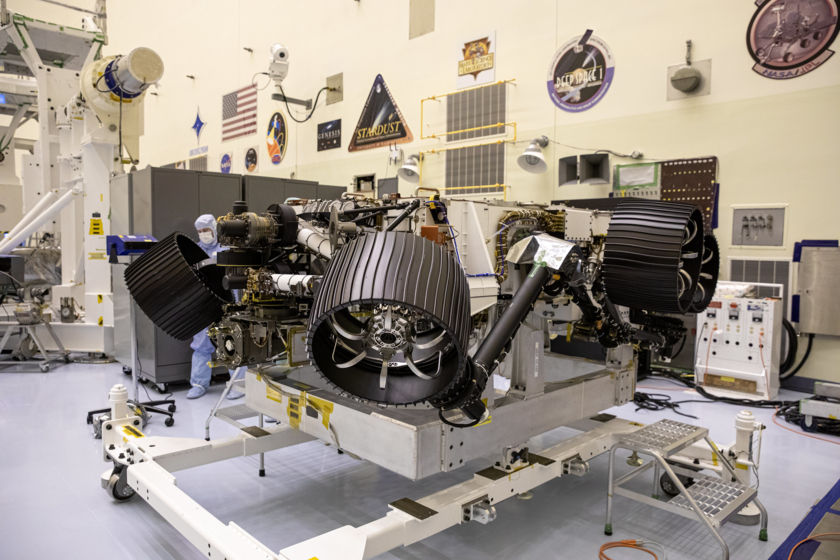 NASA's Mars 2020 rover is processed for launch at Kennedy Space Center in Florida on 14 February 2020. The rover was manufactured at NASA’s Jet Propulsion Laboratory in Pasadena, California.

NASA’s Mars 2020 rover is being unpacked after shipping to Florida for launch. The rover will lift off in July or August and arrive on Mars in February 2021, less than one year from now. Mars 2020 will search for signs of past life, while collecting soil and rock samples for future return to Earth. The missions that will return the samples to Earth still need to be formally approved and funded. Learn more about the Mars 2020 rover here.

The privately funded Breakthrough Listen initiative, which uses radio and optical telescopes to search for signals broadcasted by intelligent beings, released 2 petabytes of new data for anyone to analyze. It’s the second big data dump in the $100 million project’s 4-year history. Among the data are observations of nearby stars, the Milky Way’s galactic plane, and an interstellar comet that recently passed through our solar system. The project’s principal investigator reports no signs of aliens yet, while noting that only 20 percent of the data have been analyzed.

A Northrop Grumman Cygnus cargo spacecraft successfully arrived at the International Space Station carrying 3.6 metric tons of supplies, research equipment, and station hardware. Cygnus  launched from NASA’s Wallops Flight Facility in Virginia on 15 February. It is expected to remain attached to the station until May, when it will be filled with trash and sent into Earth’s atmosphere for destructive reentry. Learn more about the International Space Station here.

China’s Yutu-2 Moon rover started its 15th lunar day of operations. The rover has traveled more than 367 meters since landing in December 2018. Yutu-2 is part of the Chang’e-4 mission to explore the far side of the Moon, where an ancient impact may have exposed the Moon’s mantle. By studying this region directly, scientists hope to learn more about the early solar system and Earth. Learn more about the Chang’e-4 mission here.

Recently returned images of asteroid Bennu captured by NASA’s OSIRIS-REx spacecraft came back to Earth slightly out of focus, due to a glitch in the spacecraft’s laser altimeter system, which was being used to focus the camera. The mission team is still deciding on corrective actions. OSIRIS-REx will collect a sample from Bennu in August and return it to Earth in 2023. The mission seeks to understand how primitive asteroids contributed to the origin of planets, and what role they may have played in the origin of life on Earth. Learn more about the OSIRIS-REx mission here.

Russian news reports that a series of upcoming must-pass parachute tests for the ExoMars 2020 mission have been delayed until March, leaving little margin before the launch window in late July through early August. Mars missions can only be launched when Earth and Mars are favorably aligned; a 2-month window opens roughly every 2 years. Russia and Europe are teaming up on the ExoMars 2020 mission, which consists of the Rosalind Franklin rover and Kazachok lander. The mission will search for signs of past and present life on the Martian surface. Learn more about the 4 missions launching to Mars this year.

Next week: A brand-new Downlink is coming. In addition to our weekly news roundup, each Downlink will soon contain bonus space images and factoids, announcements from The Planetary Society, and actions you can take to support space science and exploration. You will also be able to receive The Downlink in your inbox—subscribe to our email list today!