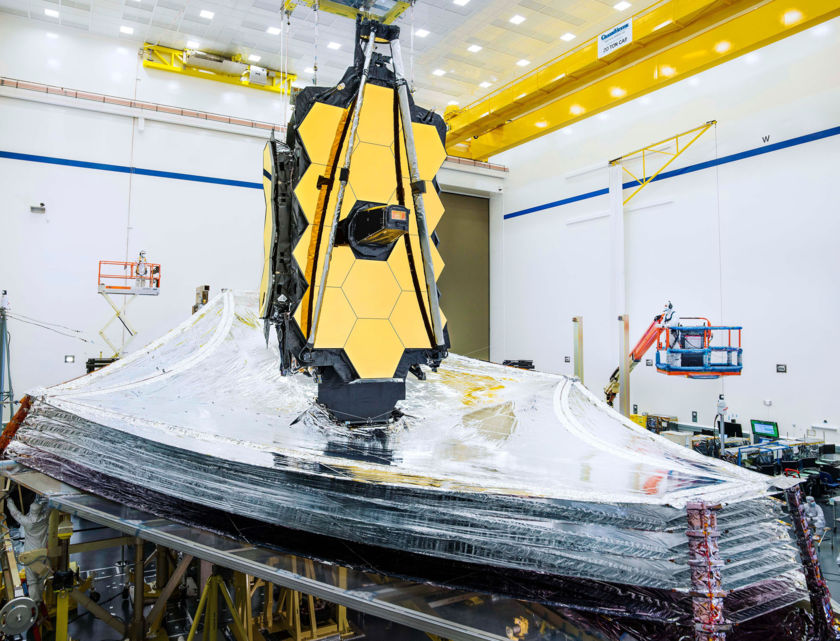 Welcome to issue 4 of The Downlink, a planetary exploration news roundup from The Planetary Society! Here's everything that crossed our radar this week.

NASA’s James Webb Space Telescope (JWST) successfully deployed its sun shield during a ground test. It was the first time the five-layer shield, which will block the sun’s rays and keep the telescope chilled to -223° C (-370° F), unfurled with the telescope mirrors attached. JWST is scheduled to launch in 2021.

NASA released a new selfie of the Mars Curiosity rover comprised of 57 images taken by a camera on the rover’s robotic arm. Curiosity also recently completed a “wet chemistry” experiment by placing a drill sample into a special cup containing solvents. By heating the solvents and sample, Curiosity can scan for carbon-based molecules important to the formation of life.

NASA’s Mars 2020 rover is standing on its own 4 wheels for the first time. The rover is undergoing tests prior to next year’s launch; it lands on Mars in February 2021. Learn more about the mission.

China’s Yutu-2 rover, which is exploring the far side of the Moon, woke up for its eleventh lunar day of operations. The rover must hibernate at night to survive the Moon’s frigid temperatures, which drop below -170° C (-274° F). If Yutu-2 survives lunar day 11, it will become the longest-lived Moon rover to stay mobile.

Engineers at NASA’s Michoud Assembly Facility in Mississippi installed the first engine on the first Space Launch System rocket. The massive launcher is an integral part of the agency’s Artemis program, which aims to land humans on the Moon in 2024.

The European Space Agency’s BepiColombo spacecraft, which will enter orbit around Mercury in 2025, has been in space for one year. The mission team released a video compilation of space selfies to celebrate.

The heat probe experiment on NASA’s Mars InSight spacecraft has almost buried itself in the Martian soil. The probe got stuck in March and mission officials are currently using InSight’s robotic arm to pack the soil around the probe to help it dig.

NASA’s Lucy spacecraft has passed its critical design review, paving the way for its construction. The spacecraft, which will visit multiple asteroids near Jupiter, is scheduled for launch in 2021.

Astrophysicist Jonathan McDowell released a new catalog that tracks the last-known orbital parameters of objects humanity has launched beyond Earth orbit. The catalog includes curiosities like the upper stage used to launch Apollo 11 to the Moon, which entered solar orbit in 1969.

NASA selected 10 mission concepts it will study ahead of the next planetary science decadal survey. Seven of the 10 principal investigators are women. Every 10 years, planetary scientists produce a decadal survey to help NASA decide which missions to pursue in the coming decade.

Any story of military space defense in joining NASA. NASA does space exploration and now planetary defense too. If any insight on what the protocol from US Military perspective.

Is Planetary Society planning on not doing in depth blogs anymore? I appreciate the new weekly summary of news highlights but it is not the same as the summaries and insights that the regular bloggers have done.

Hi Burton, We'll still be publishing deep-dive pieces, but they'll be more focused on big-picture questions rather than incremental updates. Think topic-driven stories like methane on Mars rather than incremental Mars mission updates. We're still recalibrating our content mix at the moment but you'll hopefully see some changes starting next year. I'm glad you're enjoying The Downlink! Jason Davis