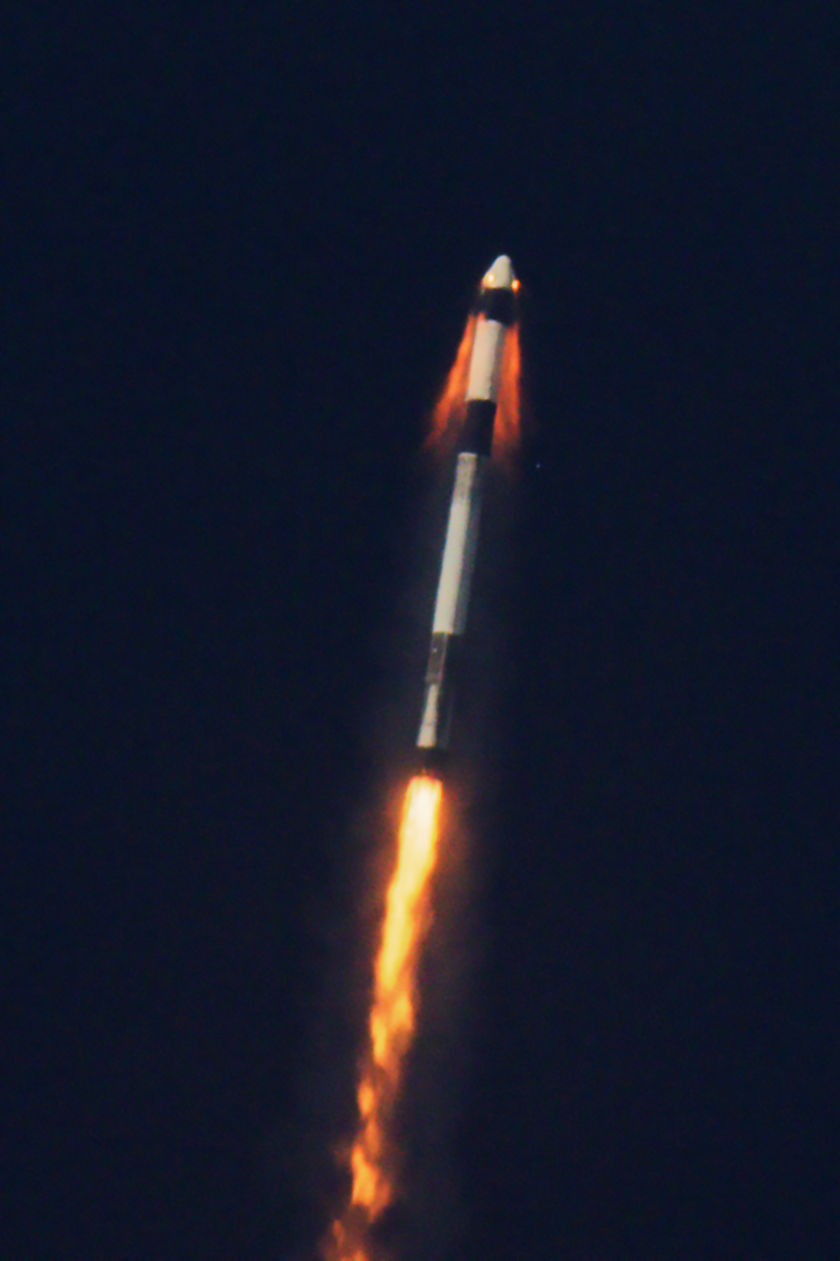 SpaceX’s Crew Dragon spacecraft uses its built-in thrusters to blast away from a Falcon 9 rocket during a flight test on 19 December 2020. The test validated Crew Dragon’s ability to safely separate from its rocket in the event of an emergency.

SpaceX completed the last major flight test of its Crew Dragon spacecraft, demonstrating the capsule’s ability to safely separate from its rocket in the event of an emergency. The test began with a Falcon 9 and Crew Dragon blasting off from Kennedy Space Center in Florida. After a minute and a half of flight, SpaceX intentionally shut down the Falcon 9’s engines, triggering the capsule’s abort thrusters to fire and pull the capsule away. As planned, The Falcon 9 broke apart due to aerodynamic forces moments later, while Crew Dragon parachuted safely into the sea for recovery. The test paved the way for astronauts to ride Crew Dragon to the International Space Station by mid-year.

The heat-flow probe known as the mole aboard NASA’s InSight lander on Mars once again backed itself out of its hole while attempting to descend into the martian soil. Scientists and engineers have been trying to bury the mole since March 2019; it can’t function for scientific measurements until the entire mole is underground, and was designed to work best at a depth of more than 3 meters. A lack of friction with the sides of the hole is believed to be the cause. Learn more about InSight here.

China is preparing for an April test flight of its new crew vehicle that will be used to send as many as 6 astronauts beyond Earth orbit. The new spacecraft is designed for a variety of purposes including trips to the Moon and to China’s Tianhe space station in Earth orbit. Construction of Tianhe could begin next year.

NASA’s OSIRIS-REx spacecraft performed a close flyby of its future landing location on asteroid Bennu, passing only 620 meters above the spot where it plans to collect a sample in August. The site, informally called Nightingale, is a 70-meter-wide, relatively young crater filled with fine-grained soil.

The core stage of NASA’s first Space Launch System rocket, which is scheduled to perform a test flight next year, was lowered into a giant test stand at the agency’s Stennis Space Center in Mississippi. NASA intends to test-fire the rocket there before shipping the stage to Florida for launch.

NASA spacewalkers completed the third and final spacewalk to replace a set of aging nickel-hydrogen batteries aboard the International Space Station with newer, more powerful lithium-ion versions. Another spacewalk is planned this weekend to complete repairs of the Alpha Magnetic Spectrometer, which scientists use to hunt for dark matter. It is the ninth spacewalk for the current crew, which sets a new record in space station program history.

Chinese media reports that the country’s lunar sample return mission, Chang’e-5, is scheduled to launch in October 2020. The mission will return as many as 4 kilograms of lunar soil to Earth and practice key technologies needed for future crewed missions such as the ability to rendezvous in lunar orbit.

Public voting is open to name NASA’s Mars 2020 rover. Just 9 candidate names remain, winnowed down from choices submitted by U.S. schoolchildren. The rover, which will search for signs of past and present life on Mars, is just one of up to 4 missions launching to Mars in July or August of this year.

Japan’s Hayabusa2 spacecraft, which collected samples from asteroid Ryugu last year, will arrive back at Earth in November or December this year, according to an updated schedule posted by Japan’s space agency JAXA. Hayabusa2’s samples may shed light on the origin and evolution of our solar system.

Insight could use a break and move to a very sandy location in order to test the mole digging capacity. Different place for a different chance to work. Next rover may do better with a laser drill.

will the Chinese version of Orion be manned or unmanned in April?