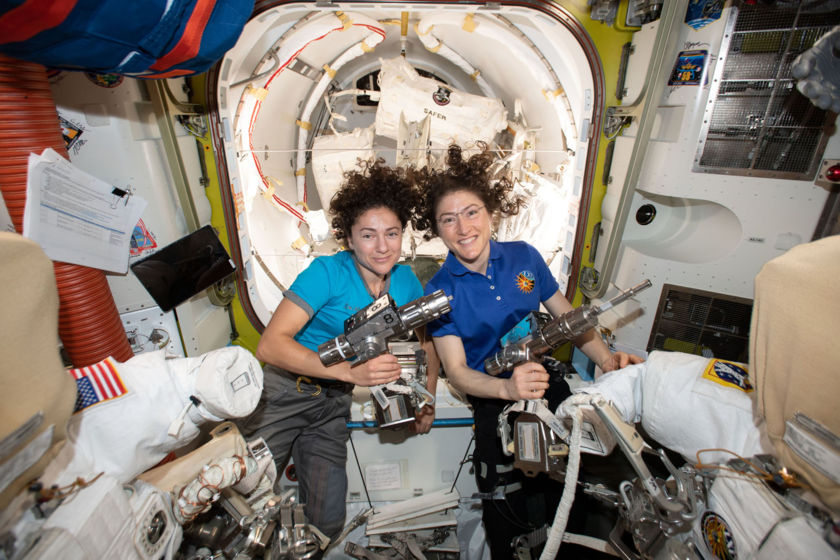 Welcome to issue 3 of The Downlink, a planetary exploration news roundup from The Planetary Society! Here's everything that crossed our radar this week.

NASA astronauts Christina Koch and Jessica Meir completed the first all-woman spacewalk in history. It was the 421st spacewalk by any country since 1965, but just the first time no men participated. During their trip outside the International Space Station, Koch and Meir replaced a battery charge/discharge unit that regulates the amount of power coming from the station's solar arrays. NASA is in the midst of installing new lithium-ion batteries to store power from those arrays. Learn more about the International Space Station here.

The Hubble Space Telescope captured our sharpest look yet at Comet 2I/Borisov, the second-ever confirmed interstellar comet. Early studies of Borisov show it is similar to comets found in our own solar system, meaning other star systems might have the same basic ingredients as ours, including the building blocks of life. Learn more about the comet here.

The “mole” temperature probe experiment on NASA’s InSight Mars lander is hammering itself into the Martian soil once again, thanks to some help from the lander’s robotic arm. Scientists on the project were thrilled to see the results. In other InSight news, the HiRISE camera aboard NASA’s Mars Reconnaissance Orbiter has captured new images of the lander on the Martian surface. Learn more about InSight here.

A new picture of the “gel-like” substance found by China’s Yutu-2 rover on the far side of the Moon appears to confirm a more mundane explanation: the substance is likely impactite, a glassy rock formed by a meteor impact. Learn about the Yutu-2 rover and Chang’e-4 mission here.

Environmental testing is proceeding on the European Space Agency’s ExoMars lander and rover mission, which is scheduled to launch in mid-2020. But ESA officials won’t greenlight the mission until completing more parachute tests in early 2020, following failures of other parachute tests earlier this year. Any delay would push the mission’s launch date to 2022, which is the next time Earth and Mars are favorably aligned. Learn more about the fleet of spacecraft planned for launch to Mars next year.

NASA intends to buy enough Space Launch System (SLS) rockets from Boeing to support as many as 10 Artemis missions to the Moon. After the initial Artemis III Moon landing flight scheduled for 2024, NASA plans to equip SLS with a more powerful upper stage. The agency made a similar commitment last month with Lockheed Martin to buy up to 12 Orion spacecraft, indicating SLS and Orion remain the agency’s human spaceflight vehicles of choice for the foreseeable future. Learn more about the agency’s back-to-the-Moon Artemis program here.

In other Artemis news, NASA unveiled the spacesuits its astronauts will use. Here’s a quick overview video from NASA. The Orion Crew Survival System suit is a lightweight orange garment to be used for launch and reentry, while the  Exploration Extravehicular Mobility Unit (xEMU) is a beefier suit designed for Moonwalks.

Looking for the perfect pumpkin carving idea this Halloween? How about a cutout of the James Webb Space Telescope (JWST), NASA’s flagship astrophysics mission that will launch in 2021? You can download three JWST pumpkin patterns of varying complexity here.

More important is good people get the job done right. Human of any kind suck as to getting together into a single government. We is about 195 countries and not joining forces for a common goal, anytime soon.