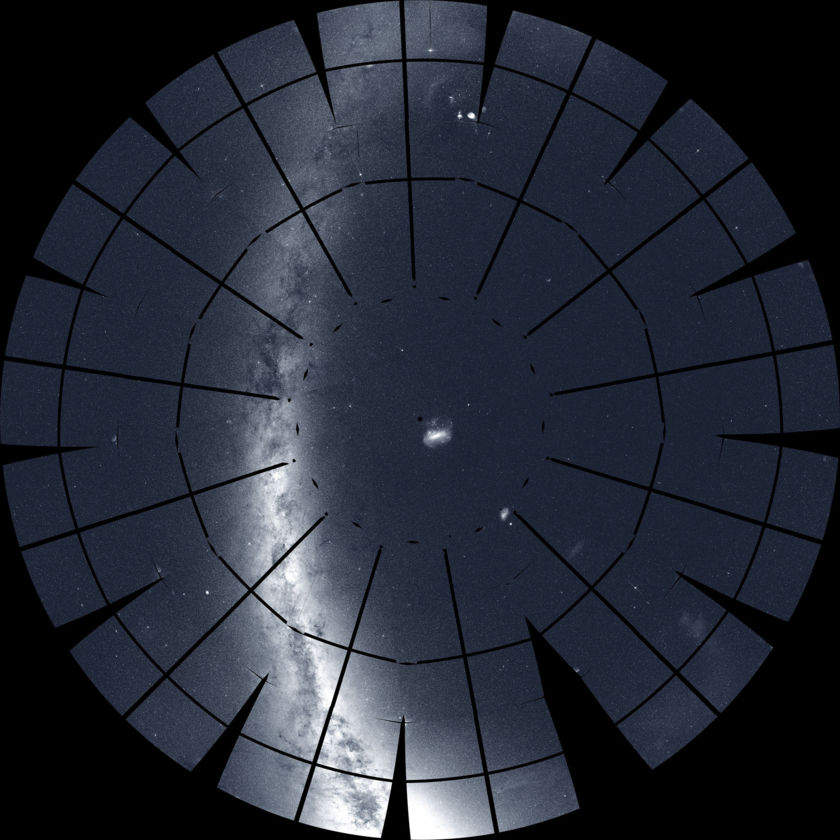 This image of the southern sky as seen by TESS, NASA's Transiting Exoplanet Survey Satellite, was created by NASA postdoctoral fellow Ethan Kruse using 208 images taken during the mission’s first year of operations. You can download various formats of the image here, including versions with constellations labeled.

Welcome to issue 6 of The Downlink, a planetary exploration news roundup from The Planetary Society! Here's everything that crossed our radar this week.

NASA released a panorama of the southern sky created using images from TESS, the Transiting Exoplanet Survey Satellite.  NASA postdoctoral fellow Ethan Kruse assembled the panorama from 208 TESS images taken during the mission’s first year of operations. You can download various formats of the image here, including versions with constellations labeled.

Scientists at NASA's Johnson Space Center in Houston opened a Moon sample that has been sealed since Apollo 17 astronauts returned it to Earth in 1972. NASA had placed several such samples in long-term storage, anticipating that future laboratory technologies would be able to perform more advanced examinations. The samples may shed light on how the building blocks of life were distributed in the early solar system, and how the surface of the Moon has changed over time.

The International Space Station replaced one berthed cargo ship with another following the departure of Japan’s HTV-8 vehicle and the launch and arrival of a Cygnus craft. NASA astronauts Christina Koch and Jessica Meir successfully captured the Cygnus vehicle, which is named after Apollo 12 moonwalker Alan Bean, using the station’s robotic arm. Learn more about the International Space Station here.

China has delayed its ambitious Chang’e-5 lunar sample return mission until late 2020. The expected move comes as the country prepares to return its Long March 5 rocket to flight for the first time since a launch failure in July 2017. The rocket will also be used to launch China’s first Mars mission in mid-2020. Meanwhile, on the Moon’s far side, the Chang’e-4 lander and Yutu-2 rover completed their 11th lunar day of operations.

NASA’s Juno spacecraft performed its 23rd close flyby of Jupiter, passing over the gas giant’s cloud tops by about 3,500 kilometers. Juno’s orbit currently carries it past Jupiter every 53 days. The mission is expected to end in July 2021. See an image from the flyby processed by Kevin Gill in our image library here.

Engineers at NASA’s Michoud Assembly Facility in Louisiana installed the second and third engines on the first Space Launch System core stage. The engines, which originally powered the Space Shuttle, were designed to be reusable but will be ditched in the ocean during SLS flights. The second engine was used to return astronaut John Glenn to space in 1998. Learn more about NASA’s back-to-the-Moon Artemis program here.

NASA’s twin Voyager spacecraft, which launched in 1977, continue to return science from beyond our solar system. Five new research papers released in the journal Nature Astronomy describe what happened when Voyager 2 crossed into interstellar space on 5 November 2018.

Boeing completed a critical test of the abort system for its Starliner crew capsule that will ferry astronauts to the International Space Station. The test simulated how the capsule would blast itself away from its Atlas V rocket in the event of a disaster on the launch pad. Only two out of three of the vehicle’s parachutes deployed; Boeing and NASA said that number was successful for the test’s purposes.