The Downlink: NASA Considers Missions to Venus, Io, and Triton 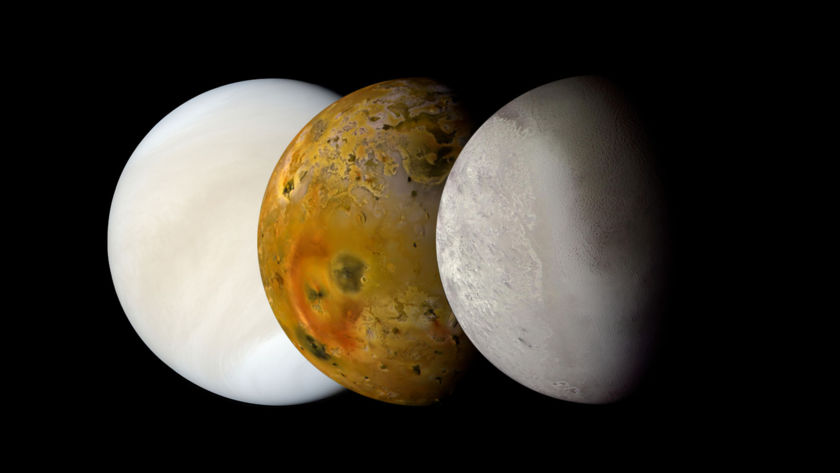 Following a downselect in February 2020, the possible solar system targets for NASA's next low-cost Discovery-class mission program are Venus, Io, and Triton. They are not displayed to scale in this image.

NASA announced the selection of 4 mission concepts that are under consideration to fly as part of the agency’s low-cost Discovery program. Of the selected concepts, 2 are vying for Venus, 1 is aiming for Io, and 1 is targeting Titan. The team behind each mission will receive funding for 9-month concept studies, after which NASA will pick up to 2 missions for further development.

The European Space Agency’s CHaracterising ExOPlanet Satellite, CHEOPS, successfully took its first test image of a star. The image shows a star located 150 light-years away and is intentionally blurry to spread the starlight out over more of CHEOPS’s camera. The goal of the mission is to precisely measure the diameters of known exoplanets. CHEOPS launched in December, and science operations are scheduled to begin in April. Learn more about CHEOPS here.

Solar Orbiter, a joint European Space Agency and NASA mission, successfully launched on a mission to study the Sun’s poles. During Solar Orbiter’s 5-year primary mission, scientists will study how radiation and charged particles blasted from the Sun are carried by the solar wind towards Earth.

The European Space Agency’s Rosalind Franklin rover has shipped to France, where it will be joined to the descent module that will carry it through Mars’ atmosphere. The module will slow down via parachute before dropping the rover above the surface, allowing it to complete the final descent on thrusters. The mission is still awaiting final parachute tests before being cleared to launch. Learn more about the 4 missions launching to Mars this year.

NASA plans to hire a new class of astronauts that could be assigned missions to the International Space Station, Moon, and Mars. The job requirements include U.S. citizenship, a master’s degree in a STEM field with related professional experience, and the ability to pass an astronaut physical. If you think you’ve got what it takes to join the astronaut corps, you can apply online between 2 and 31 March, 2020.

NASA’s Orion spacecraft, which will be used to carry astronauts to the Moon and beyond, completed environmental testing at the agency’s Plum Brook Facility in Ohio. The spacecraft was placed in a vacuum chamber for 6 weeks and repeatedly frozen and thawed, simulating conditions it will encounter in space. Learn more about NASA’s Artemis program here.

The scientists behind NASA’s New Horizons mission to Pluto and beyond released new results from the spacecraft’s flyby of the Kuiper Belt object Arrokoth last year. The findings, published in the journal Science, further support the notion that Arrokoth’s two round lobes formed in the same region of space and came together in a slow-speed collision. Learn more about the New Horizons mission here.

It'd be a darn shame if Venus didn't get it, after coming so close last time. But if I was given sole responsibility for this, I'd pick Triton. We haven't been to Uranus or Neptune since the Voyagers (I think). I'm dying to go back. To put a cassini style orbiter around Neptune would be almost too much to bear.

--I actually looked, the Triton one is just a single fly by. Woe is me! Venus it is then. Lets pick a planet and go deep!

Just correcting a typo - should be Triton where it now says "1 is targeting Titan."

The two Venus missions gotta merge; then it's gotta be that mission chosen! Then both the orbital component and the descending probe intend to tell us more about Venus's mysterious ultraviolet absorber and the chemical composition of the atmosphere, and thereby shed light on the possibility of life in Venus's atmosphere. Life in the solar system beyond Earth (or lack thereof) is far and away the outstanding elephant-in-the-room question of our era; so since all four missions would yield masses of interesting non-life-related new science (which will frankly be unrankable relative to each other, by any objective criteria), but only the Venus mission(s) can deliver significant progress on the Big Issue, then really it's a no-brainer!

Venus Davinci+ and IVO are the only two in my book that need funding. The other two are redundant and with the Tritan mission being a total waste of resources and a spacecraft. The 2nd Venus mission was already done with Magellan in the '90's. Tritan is a one shot shot flyby already done with VGR 2 in 1986. If it catches an active geyser that would be a wildest stroke of luck. VGR 2 did that.

Is it so that the Triton flyby craft can be used for more flybys, as it crosses the Kuiper belt, after the initial mission is completed?