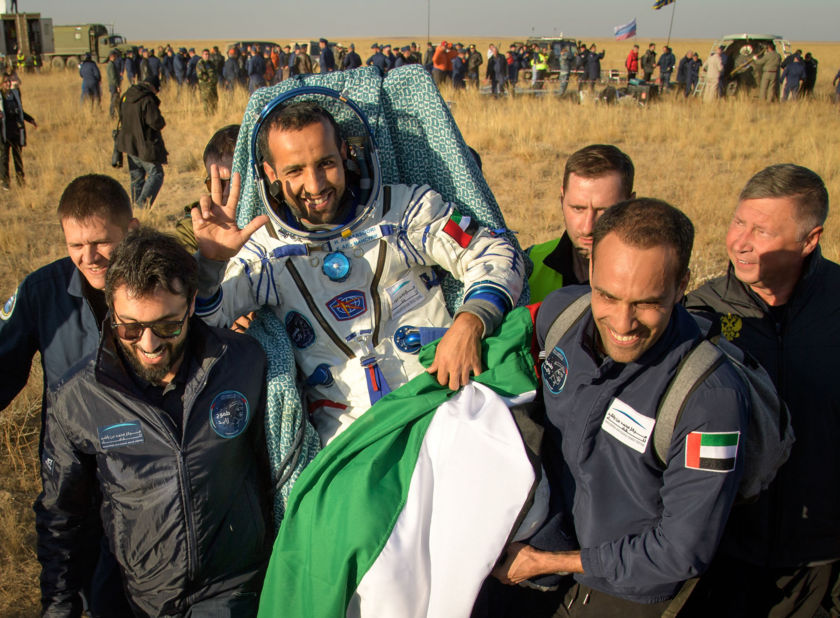 Hazzaa Ali Almansoori, the first astronaut from the United Arab Emirates, is carried to a medical tent after he and Expedition 60 crewmembers Alexey Ovchinin and Nick Hague returned to Earth in their Soyuz MS-12 spacecraft on 3 October 2019.

Welcome to The Downlink, a new planetary exploration news roundup from The Planetary Society! Here’s everything that crossed our radar this week.

Three astronauts returned to Earth from the International Space Station. NASA’s Nick Hague and Russia’s Alexey Ovchinin wrapped up a 203-day mission, while Hazzaa Ali Almansoori, the first astronaut from the United Arab Emirates, completed a 9-day spaceflight under an agreement between Russia and the UAE. Learn more about the International Space Station.

Japan’s Hayabusa2 spacecraft successfully dropped the MINERVA-II2 rover towards asteroid Ryugu. It will likely reach the surface by 8 October. The probe is similar to the hopping MINERVA-II1 rovers that returned images from the surface in September 2018. MINERVA-II2 suffered a malfunction that prevented data from being sent back to Hayabusa2; the Hayabusa2 team dropped it anyway in order to measure Ryugu’s gravity. See a picture of the falling rover and learn more about the Hayabusa2 mission.

The seismometer deployed by NASA’s InSight lander has detected at least 21 Marsquakes. Scientists processed data from the seismometer to make the quakes audible to human listeners; a playlist of those sounds is available here. Meanwhile, NASA is trying a new technique to help the lander’s heat probe experiment bury itself in the ground. Learn more about the InSight mission.

China’s Yutu-2 rover is wrapping up its tenth lunar day exploring the far side of the Moon. The rover must hibernate at night to survive, when lunar temperatures plunge below -170 degrees Celsius. Learn more about Yutu-2 and the Chang’e-4 lander, which are studying a region where an ancient lunar impact may have exposed the Moon’s mantle. Remarkably, Chang’e-4’s predecessor, the Chang’e-3 lander, was still active on the Moon as of last week.

NASA’s Juno spacecraft completed a 10.5-hour thruster burn to avoid what would have been a 12-hour trip through Jupiter’s shadow. The lengthy eclipse would have drained the solar-powered spacecraft’s batteries, and without heaters to keep it warm, it likely would have succumbed to the cold. Juno’s original trajectory would never have carried it through Jupiter’s shadow for so long, but a main engine problem in 2016 left the spacecraft in a different orbit. See pretty pictures of Jupiter in our image library.

NASA’s Lunar Reconnaissance Orbiter Camera (LROC) team released images of the area of the Moon where India’s Vikram lander crashed on 6 September 2019. LROC scientists were unable to find the lander, noting that it may be hiding in the shadows because the image was captured late in the lunar day. Learn more about Vikram and the Chandrayaan-2 mission.

A giant mockup of the Space Launch System (SLS) rocket’s core stage is now inside NASA’s Vehicle Assembly Building at the Kennedy Space Center in Florida. Ground systems crews will practice stacking the rocket section, known as a pathfinder, on its mobile launch pad ahead of the first SLS flight scheduled for 2020 (but more likely to occur in 2021). Learn more about NASA’s back-to-the-Moon Artemis program.

NOAA is still trying to get the DSCOVR climate satellite back in operation. Known for producing daily full-globe imagery of the Earth, the spacecraft has been in safe mode since late June. Engineers are working on a software fix expected to be in place by early 2020.

Er... you seem to have forgotten a small event in Boca Chica?