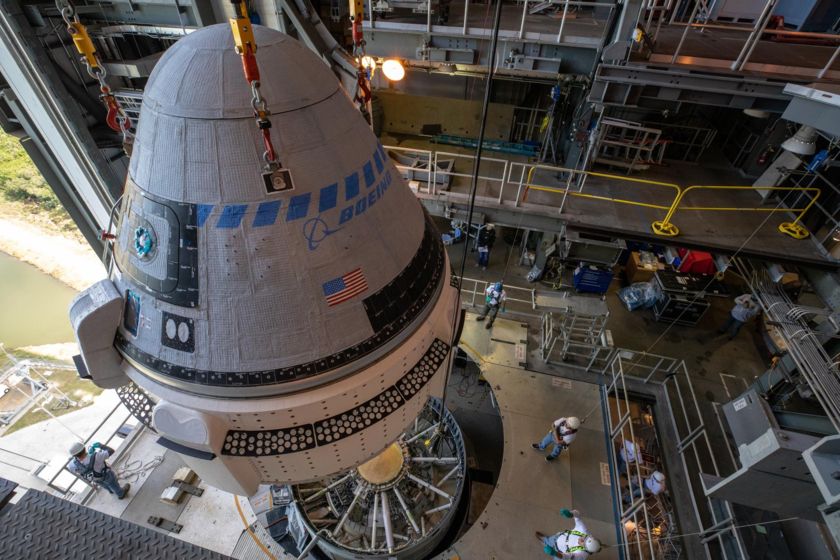 The first Boeing Starliner spacecraft is guided into position above its Atlas V rocket at Cape Canaveral, Florida, ahead of a test mission to the International Space Station scheduled for 17 December 2019. Providing that the flight goes well, Starliner could carry astronauts to the station next year.

Welcome to issue 8 of The Downlink, a planetary exploration news roundup from The Planetary Society! Here's everything that crossed our radar this week.

The first Boeing Starliner spacecraft that will launch to the ISS on an uncrewed demo flight was mated to its Atlas V rocket at Cape Canaveral, Florida. Launch is currently scheduled for 17 December 2019. Providing that the flight goes well, Starliner could carry astronauts to the station next year. Learn more about the International Space Station here.

As The Downlink publishes, astronauts aboard the International Space Station are conducting the second in a series of spacewalks to replace the cooling system on the Alpha Magnetic Spectrometer (AMS), a cosmic-ray detector that helps astrophysicists search for dark matter. AMS was not originally designed to be repaired. The initial results from AMS, published in 2013, are the ISS program’s most-cited scientific paper.

The heat probe experiment on NASA’s InSight lander is once again hammering itself into Mars’ surface. Mission officials have had considerable problems with the experiment, known as the “mole,” since it first got stuck trying to bury itself in March. Learn more about InSight here.

Scientists have recorded a bizarre orbital dance between two of Neptune’s inner moons, Naiad and Thalassa. The moons share a similar orbit, with Thalassa moving in a straight line while Naiad, the quicker-orbiting of the two, travels up and down in a wave pattern. The moons never come any closer than 3,540 kilometers. If you were standing on Thalassa, you’d see Naiad pass twice above you and twice below before the cycle repeated.

Scientists have for the first time directly detected water vapor above Europa, using the Keck Observatory in Hawaii. The findings support prior research that there may be transient plumes erupting from the moon’s subsurface ocean. Another possibility is that Jupiter’s radiation is stripping water particles off Europa’s icy surface, though the paper announcing the findings argues against that possibility.

China’s Chang’e-4 lander and Yutu-2 rover have powered up for their 12th day of operations on the far side of the Moon. Yutu-2 drove approximately 318 meters in its first 11 lunar days. Learn more about the mission here.

A prototype of SpaceX’s Starship vehicle burst during a pressurization test at the company’s Boca Chica test site in Texas. SpaceX officials said the setback would not cause program delays, and construction will soon begin on an updated prototype closer to the final flight design. Starship could eventually be used for future NASA lunar cargo flights.