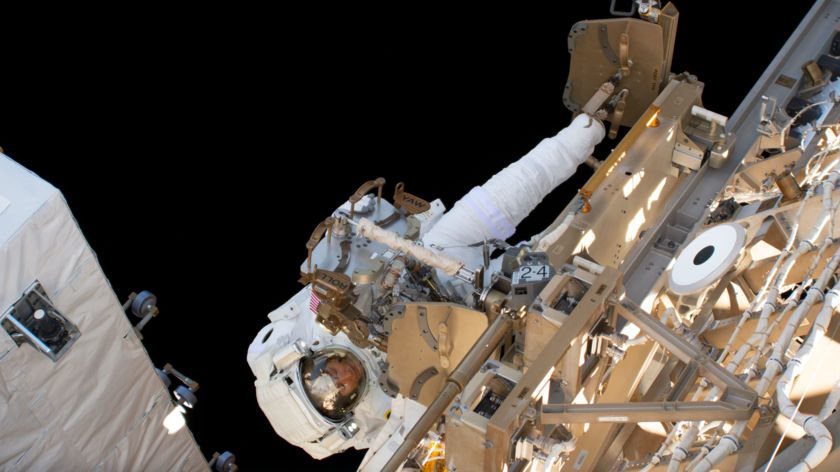 NASA astronaut Christina Koch participates in her first spacewalk outside the International Space Station on 29 March 2019. Koch participated in 6 spacewalks during her record-setting 328-day spaceflight.

NASA astronaut Christina Koch returned to Earth from the International Space Station (ISS) after a record-setting 328 days in space. She now holds the women’s record for the longest spaceflight. Koch was originally scheduled to spend just 6 months aboard the ISS, but ongoing delays with NASA’s commercial crew program prompted the agency to ask her to stay longer. This was her first spaceflight. Learn more about the International Space Station here.

NASA’s Mars 2020 rover is packed and ready for shipping to Kennedy Space Center for launch. The rover will lift off in July or August and arrive on Mars in February 2021. There, it will search for signs of past and present life, while collecting soil and rock samples for future return to Earth. However, the missions that will return the samples to Earth still need to be formally approved and funded. Learn more about the Mars 2020 rover here.

China’s Yutu-2 Moon rover powered down after its 14th lunar day of operations. To avoid damaging its instruments, the rover must sleep during the frigid lunar night, when temperatures plummet to -173 degrees Celsius (280 degrees Fahrenheit). Yutu-2 is part of the Chang’e-4 mission to explore the far side of the Moon, where an ancient impact may have exposed the Moon’s mantle. By studying this region directly, scientists will learn more about the early solar system and Earth. Learn more about Chang’e-4.

Russia’s space agency Roscomos reports that all 13 science instruments have been installed on the Kazachok lander for the European Space Agency’s Rosalind Franklin rover. Russia and Europe are teaming up to send the lander and rover, which together constitute the ExoMars 2020 mission, to Mars in late July or early August. The mission will search for signs of past and present life on the Martian surface. Learn more about the 4 missions launching to Mars this year.

The European Space Agency’s Comet Interceptor mission is one step closer to becoming a reality. ESA announced it will formally begin working with aerospace companies on proposals for the spacecraft’s design. The mission, which is scheduled to launch in 2028, will park a probe in deep space, where it can chase down a newly discovered comet approaching the Sun for the very first time. The spacecraft could also be used to visit interstellar objects passing through our solar system.

A Northrop Grumman Cygnus cargo spacecraft is set to lift off this weekend for the International Space Station. Cygnus will arrive at the station on 11 February carrying 3.6 metric tons of research, crew supplies, and hardware. It is scheduled to remain attached to the station through mid-May.