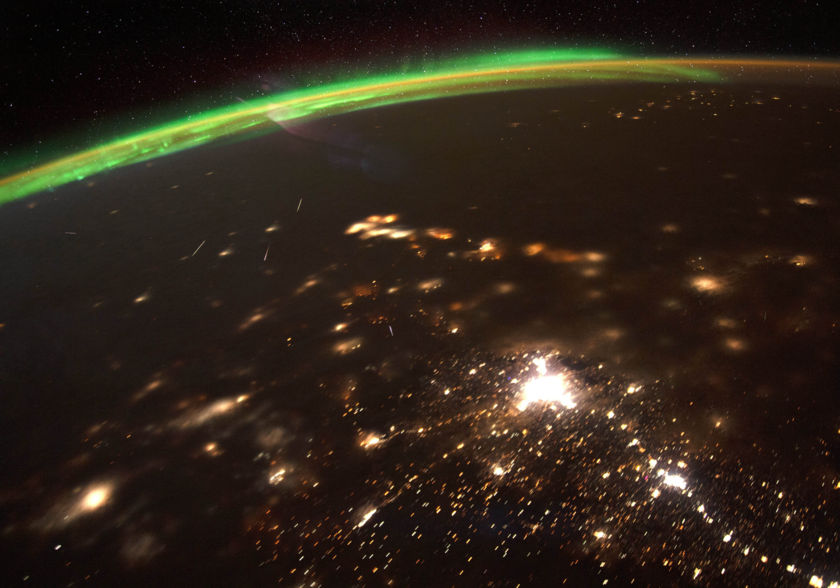 Astronauts aboard the International Space Station observed the Quadrantids, an annual January meteor shower. An image shared by Christina Koch on Twitter shows several of the meteors streaking through the atmosphere, with the northern lights in the background.

NASA’s TESS spacecraft found an Earth-size planet in the habitable zone of a star just 100 light years away from our solar system. The host star is fainter than our Sun, but the planet, known as TOI 700 d, orbits much closer to its star than we do to the Sun, making conditions right for liquid water to exist on the surface. The discovery was confirmed by NASA’s Spitzer Space Telescope and Earth-based observations.

The European Space Agency’s exoplanet-studying CHEOPS spacecraft has returned its first full-frame image to Earth. CHEOPS, the CHaracterising ExOPlanet Satellite, is a space mission to precisely measure the diameters of known exoplanets, and it launched in December 2019. Learn more about CHEOPS here.

A new asteroid named 2020 AV2 has been discovered orbiting close to the Sun, the first ever found in an orbit that never travels beyond Venus' orbit. The asteroid is likely a kilometer or more across. Now that one has been found to exist, it's probable that there are more to be discovered. Asteroids that stay close to the Sun are difficult to find because of the Sun's glare; new asteroid survey missions could aid in their discovery.

The first core stage of NASA’s giant Space Launch System rocket is ready for shipping from the Michoud Assembly Facility in Louisiana. The rocket stage will ship by barge to Stennis Space Center in Mississippi, where it will be installed in a giant test stand and fired before heading to Florida for launch. The first test flight, which will send an uncrewed Orion spacecraft to lunar orbit, is planned for 2021. Learn more about NASA’s Artemis program here.

The European Space Agency’s Rosalind Franklin Mars rover recently underwent electromagnetic interference testing ahead of its scheduled mid-2020 launch. Whether or not the rover will be able to launch still depends on crucial parachute testing that must be successfully completed. Mars missions can only be launched when Earth and Mars are favorably aligned; a 2-month window opens roughly every 2 years.

A SpaceX Dragon capsule returned to Earth carrying 1.6 metric tons of science and cargo, completing its one-month mission. Among its return cargo is a failed power converter that was replaced during the first all-woman spacewalk last October. Engineers on Earth will examine the power converter to learn why it failed. Learn more about the International Space Station here.

Astronauts aboard the ISS are scheduled to conduct 3 spacewalks this month to finish replacing the batteries that store power generated by the station’s solar arrays, and complete repairs on the dark matter-hunting Alpha Magnetic Spectrometer. The series of spacewalks started last year.

TOI 700d or Terra or Earth2 is a great example of how mysterious nature works. This has a red dwarf sun with no outerbelt to it, so it seem. As long there is plenty of needed resources for such a large population, than the possibility is there. With no other intelligent life on it and a strong planet electromagnetic shield that is welcome. Great discovery and a good sample on what to look for, in search of habital planets.