A New Exoplanet and a Martian Helicopter

These images of Earth were taken by the Japanese-European BepiColombo spacecraft on 9 to 11 April 2020 as the spacecraft flew by Earth.

The pictures are in from BepiColombo’s Earth flyby last week. The European-Japanese spacecraft, which launched in 2018, used Earth’s gravity to swing toward the inner solar system. As it flew past, the spacecraft snapped shots of our planet using its black-and-white monitoring cameras. Learn why we explore Mercury and what BepiColombo hopes to discover there.

The Moon's orbit is getting farther from Earth at about the same rate your nails grow, about 38 millimeters (1.5 inches) per year 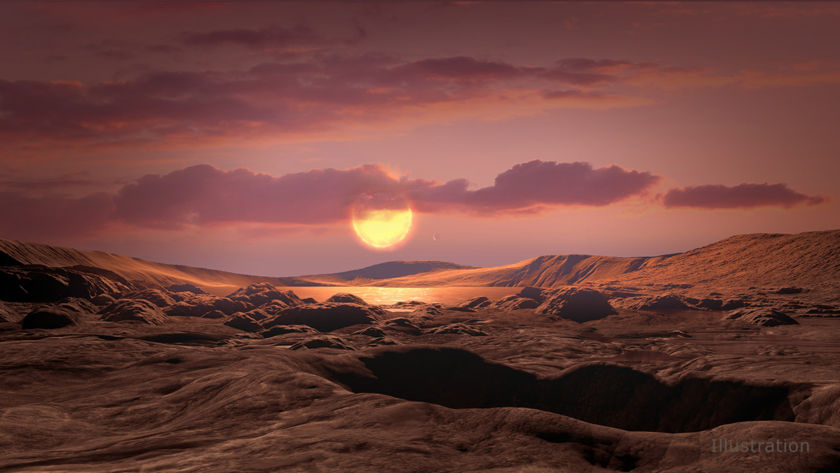 This artist's concept shows what exoplanet Kepler-1649c could look like on its surface. The planet is the closest to Earth in size and temperature found yet in data from the Kepler space telescope.

Scientists have discovered a new Earth-sized planet in a star’s habitable zone—the region where liquid water could exist on its surface. The discovery was made using data from the now-retired Kepler Space Telescope. Out of all the exoplanets found by Kepler, this new world—located 300 light-years from Earth—is most similar to Earth in size and estimated temperature. Learn why and how we study exoplanets, and how you can get involved. Pictured: An artist’s depiction of the surface of the newly discovered exoplanet. Image credit: NASA/Ames Research Center/Daniel Rutter

NASA announced that Masten Space Systems will fly a small lander to the Moon’s south pole in 2022, carrying instruments and technology demonstrations that will help prepare for human landings in 2024. Masten may be especially familiar to Planetary Society members: the company flew our PlanetVac sample collection experiment on its Xodiac rocket in 2018.

NASA’s OSIRIS-REx spacecraft completed a sample collection rehearsal at asteroid Bennu, coming just 75 meters from the surface before backing away as planned. The probe is scheduled to touch down on Bennu in August, grabbing a small sample of regolith that will be returned to Earth in 2023. The samples could shed light on the connection between asteroids and the formation of our solar system, as well as the role asteroids played in bringing water to Earth.

NASA astronauts Andrew Morgan and Jessica Meir, as well as Russia’s Oleg Skripochka, should have returned to Earth from the International Space Station Friday, just after The Downlink published. The station now has a crew of just 3 astronauts, until the planned May arrival of NASA’s Bob Behnken and Doug Hurley aboard a SpaceX Crew Dragon spacecraft.

Engineers at NASA and the German Aerospace Center continue to make progress in their efforts to save the heat-flow probe known as the mole aboard the Mars InSight lander. The self-hammering instrument, known as the mole, has unsuccessfully been trying to bury itself since March 2019. InSight is using its robotic scoop to press down on the mole while it hammers. 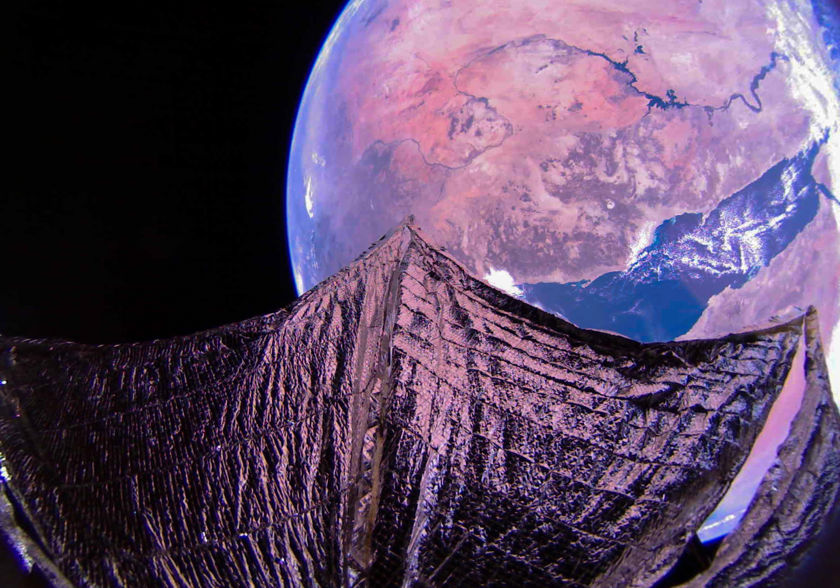 This image taken by LightSail 2's camera 2 on 9 February 2020 shows the Red Sea and the Nile River. North is approximately at right. The sail appears slightly curved due to the spacecraft's 185-degree fisheye camera lens. The image has been color adjusted and some of the distortion has been removed.

LightSail 2 is still orbiting the Earth and sending back data, teaching us more about solar sailing and its potential for space exploration. The spacecraft is also still sending back stunning photos. Pictured: LightSail 2 above the Red Sea and the Nile River.

You may be wondering how the coronavirus pandemic will impact space exploration in the coming years. NASA Administrator Jim Bridenstine joined Planetary Radio this week to address the agency’s response to the public health crisis, the ongoing work toward the Perseverance Mars rover’s upcoming launch, and the outlook for the agency. Spoiler alert: he’s optimistic that the next decade of exploration will still be phenomenal.

If you weren’t able to join the Yuri’s Night global webcast on 11 April, you can still enjoy the celebrations by watching the video of the event. Planetary Society board member Robert Picardo opens the event, which features astronauts Chris Hadfield, Scott Kelly, Nicole Stott, plus other space luminaries, including our CEO Bill Nye.

In last week’s Downlink we announced an upcoming special interactive edition of Planetary Radio Live with host Mat Kaplan and Chief Scientist Dr. Bruce Betts. This event has been bumped back a week, and is now scheduled for Thursday 30 April at 1pm PT/ 4pm ET/ 8pm UTC. We’ll share details on how to join in next week’s Downlink email.

Venus is still shining bright in the night sky after sunset and can be easily spotted. If you’re staying up very late or getting up very early, you’ll be able to see Mars, Jupiter, and Saturn for a few hours before sunrise. 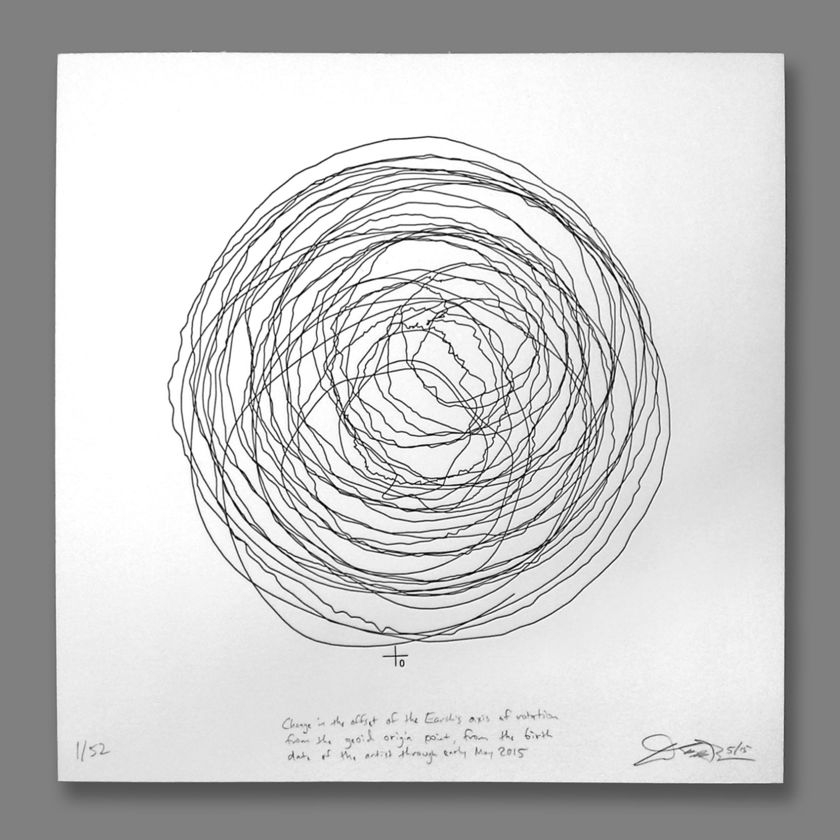 Visualizing change in the offset of the Earth’s axis

Planetary Society member Ted Ollier sent us this artwork he created, which has the nicely explanatory title: “Change in the offset of the Earth’s axis of rotation from the geoid origin point, from the birth date of the artist through early May 2015.” Much of his artwork involves astronomical concepts, pulling data into visual abstractions that convey information as well as aesthetics. More of Ollier’s work can be found on his website.

Planetary Society member Ted Ollier sent us this artwork he created, which has the nicely explanatory title: “Change in the offset of the Earth’s axis of rotation from the geoid origin point, from the birth date of the artist through early May 2015.” Much of his artwork involves astronomical concepts, pulling data into visual abstractions that convey information as well as aesthetics. More of Ollier’s work can be found on his website.

Hi Jason Davis and The Planetary Society; As you might be aware, I have been urging you to make the most of Lightsail-2's imaging ability while it is still at a high enough altitude above earth to be able to demonstrate solar-sailing with the momentum from the sun's light greater than the effect of atmospheric drag from Earth's atmosphere. I was very glad to see some new processed pictures from Lightsail-2 with the complete outline of Lightsail-2. Are these pictures with the reflections of part of India on Earth in the background and another with a full Moon in part of the background the first results of combining near simultaneous images from Lightsail-2 cameras 1 and 2 into combined images and showing all of Lightsail-2 instead of only about one half and if so will be getting more similar pictures soon with less distortion? Also the surface of Lightsail-2 in these two possible combined images seems to look almost transparent and of a green color with perhaps the reflection of half of lightsail-2. However, there is a clear break with the edge of Lightsail-2 and the blackness of outer space. Are these other effects on the body of Lightsail-2 effects of distortion and if so might they be further corrected in the future. Anyway, I am glad to see for the first time what looks like a good effort to combine the two cameras of Lightsail-2 into one combined image showing all of Lightsail-2 and some reflection and hope to see more similar images in the future with more understandable reflection and possibly background objects like part of Earth and outer space and perhaps still be able to produce videos of Lightsail-2 while solar sailing based on actual combined Lightsail-2 camera images. I was also very interested in the article about the new possibly especially potentially habitable exo-planet Kepler 1649c.