Returning a sample from asteroid Bennu

OSIRIS-REx is a mission to retrieve a sample from near-Earth asteroid 101955 Bennu. By returning pristine carbon-bearing rocky material from the surface of an asteroid, the science team seeks to understand how primitive asteroids contributed to the origin of planets, and what role they may have played in the origin of life on Earth.

The mission will map Bennu and its composition in 3D and ground-truth earlier astronomical surveys. It will also study how Bennu’s orbit changes when it gets heated by sunlight and radiates the heat away in a different direction at night, a phenomenon known as the Yarkovsky effect. OSIRIS-REx’s principal investigator is Dante Lauretta, and the deputy PI is Heather Enos.

In 2013, The Planetary Society, University of Arizona, and MIT held a naming contest for Bennu, which had been called 1999 RQ36 when it was discovered.

The final four candidate sample collection sites on asteroid Bennu are designated Nightingale, Kingfisher, Osprey and Sandpiper. The final site will be selected in December 2019. See here for full animation. 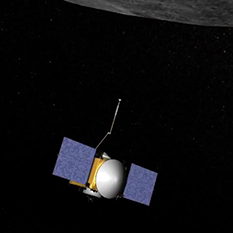 NASA’s OSIRIS-REx mission and The Planetary Society invited people worldwide to submit their names for a round-trip ride to asteroid Bennu. Search for your certificate here. 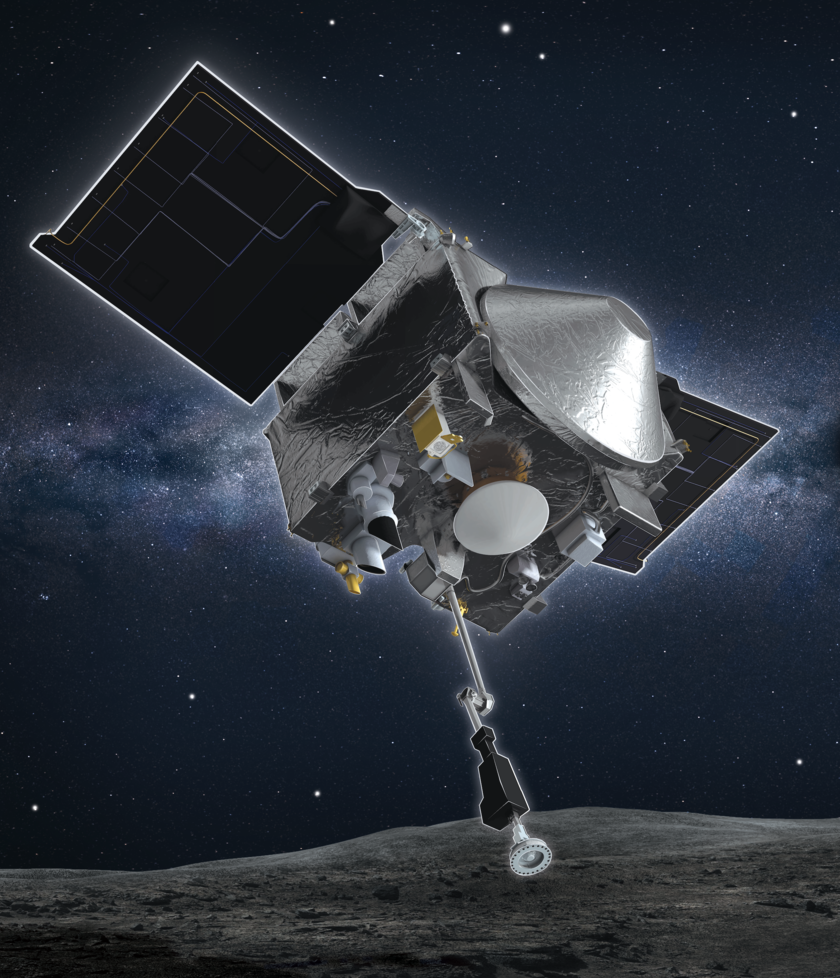 The main body of the OSIRIS-REx spacecraft has heritage that runs through MAVEN and Juno back to Mars Reconnaissance Orbiter. The sample return capsule is a near-duplicate of the one from Stardust.

Power: Two solar panels with a total collecting area of 8.5 square meters. They collect between 1,226 and 3,000 watts depending on OSIRIS-REx’s distance from the Sun. Unusually for spacecraft solar arrays, they have a 2-axis gimbal, a “shoulder” joint. Ordinarily, the solar panels are flat and coplanar, but when the spacecraft descends to grab a sample they angle upward in “TAG configuration.” Most mission art shows the panels in this rarely-used TAG configuration. 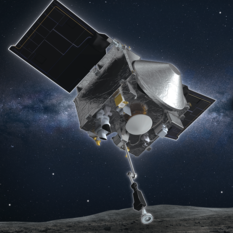 OSIRIS-REx is expected to cost $1.16 billion over its 15-year history. But that's not the whole story. 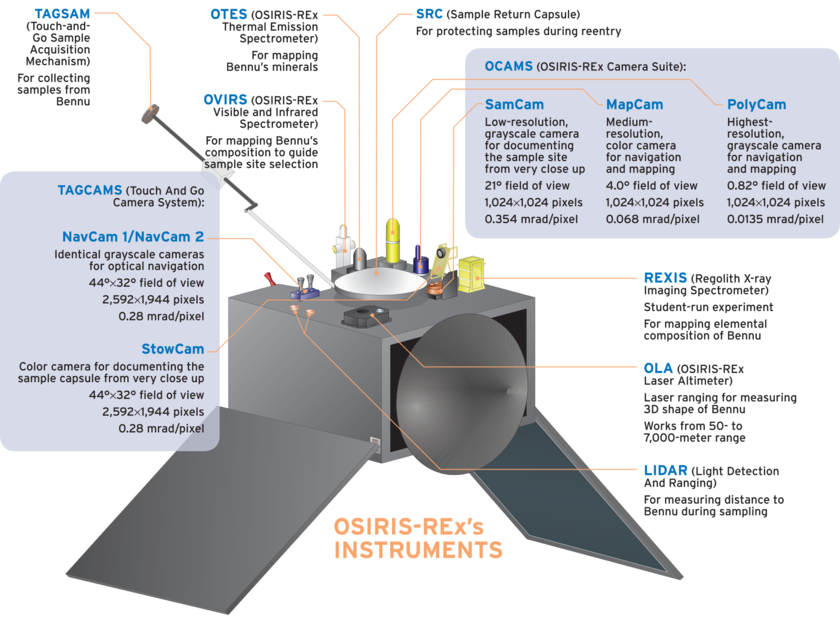 OSIRIS-REx’s instrument deck is crowded. Most are science instruments, including OCAMS, OLA, OTES, OVIRS, and REXIS, but TAGCAMS and LIDAR are for navigation purposes.

OSIRIS-REx Camera Suite (OCAMS): Three cameras, PolyCam, MapCam, and SamCam, having identical detectors but different optics. PolyCam is for high-resolution imaging, both long-range (providing the first resolved views of Bennu) and close-up (for sample site reconnaissance). MapCam is a medium-resolution imager for reconnaissance of the surface of the whole asteroid, mapping it in color, and searching for plumes and satellites. The wide-angle SamCam is for recording the sample collection process. Instrument scientist: Bashar Rizk. Open-access abstract: Open-access paper: Rizk et al. (2018); see also the OCAMS software interface specification.

OSIRIS-REx Laser Altimeter (OLA): A Canadian Space Agency-contributed instrument used to create a topographic map of the asteroid, both global and at higher resolution around the sample sites. OLA is designed to operate best at ranges between 0.5 and 7.5 kilometers from Bennu. It is based on a system developed for the US Air Force Research Laboratories XSS-11 mission and on the Phoenix lander Lidar system. Principal investigator: Alan Hildebrand. Dickinson et. al (2012) Paywalled paper: Daly et al. (2017)

OSIRIS-REx Visible and Infrared Spectrometer (OVIRS): A point spectrometer sensitive to light with wavelengths from 0.4 to 4.3 microns, for compositional mapping. It is designed with particular sensitivity in a wavelength range from 2.9 to 3.6 microns where organic materials have spectral features. It should also be able to map the distributions of carbonates, silicates, sulfates, oxides, and adsorbed water. It will use rotation of the asteroid and motion of the spacecraft to scan across Bennu to build up global maps. OVIRS is based on New Horizons’ LEISA. Instrument scientist: Dennis Reuter. Open-access paper Reuter et al. (2018); see also the OVIRS software interface specification.

Other instruments and experiments:

Touch-and-Go Camera System (TAGCAMS): Three engineering cameras consisting of a redundant pair of NavCams for spacecraft navigation and a StowCam that will document the storage of the retrieved sample inside the sample return capsule. The cameras are nearly identical, except that Stowcam has a color detector while the NavCams have monochrome detectors. Malin Space Science Systems press release Paywalled paper: Bos et al. (2018); see also the TAGCAMS software interface specification.

Radio Science: As with all planetary missions, radio scientists will track the spacecraft to measure the mass and gravity field of the asteroid. Paywalled paper: McMahon et al. (2018)

Touch-and-Go Sample Acquisition Mechanism (TAGSAM): TAGSAM is the crucial spacecraft component that will retrieve a surface sample from Bennu. Consisting of a 3.4-meter-long arm connected to a small sampler head, TAGSAM uses a puff of nitrogen gas to loosen regolith material from the asteroid's surface and collect it.

The sample head is the only spacecraft part that will make contact with Bennu, “high-fiving” the surface for 5 seconds while the nitrogen gas expels, forcing asteroid fragments up to 2 centimeters in diameter into the mesh-lined sample head. The head has enough gas for 3 sampling attempts, though the hope is to perform the sample operation only once. The mission goal is to collect a minimum of 60 grams of regolith, but in tests the mechanism typically picks up 10 times as much, and the head has a 2-kg capacity. The base of the sample head is covered with pads of stainless-steel Velcro that should also pick up sand-sized regolith fragments. Open-access paper: Bierhaus et al. (2017)

In mid-2020, the OSIRIS-REx spacecraft will use its TAGSAM (Touch-and-Go Sample Acquisition Mechanism) device to stir up and collect a sample of loose material from asteroid Bennu’s surface. That material, which may contain organic molecules that are the precursors to life in the Solar System, will be returned to Earth for study in 2023.