The twin Mars Exploration Rovers (MER), Spirit and Opportunity, were robot field geologists. They confirmed liquid water once flowed across the Martian surface. Both long outlasted their planned 90-day lifetimes. Following their landings on 3 and 24 January 2004, Spirit drove 7.73 kilometers and worked for 2210 sols (Martian days), until 22 March 2010. Opportunity drove 45.16 kilometers and worked for at least 5111 sols; the rover stopped responding on 10 June 2018, and the mission was declared over on 13 February 2019.

Pictures taken from the rovers’ stereoscopic cameras captivated the public, giving us the feeling that we were standing on Mars. Before the landing, principal investigator Steve Squyres made the revolutionary decision of sharing all the rovers’ photos with the public as soon as they arrived on Earth. Because of that generosity, rover fans could follow the day-to-day adventures of Spirit and Opportunity in near real-time.

The names Spirit and Opportunity were selected by NASA in a student essay contest that drew nearly 10,000 entries, sponsored by The Planetary Society and LEGO. The Society and LEGO also provided DVDs carrying the names of 4 million people. The DVDs remain in Gusev crater and on Meridiani planum as testaments to public love for Mars exploration.

Spirit took this panorama on sol 1984 (August 2, 2009) at a local time of 7:00 a.m. The Sun had risen at 05:47. The originally black-and-white panorama has been hand-colored based on the colors from another, full-color panorama taken at a different time of day.

After a long climb, Opportunity summited the highest point in its whole mission. This view look's across the wide Endeavour Crater.

The Mars Exploration Rovers mission set out to achieve 7 primary science objectives, which both Spirit and Opportunity achieved by the end of April 2004, within their 90-day primary missions:

In Gusev crater, Spirit found evidence for both past and present water cycles. The rocks of the Columbia Hills had their minerals altered by percolating groundwater. Home Plate is the eroded remnant of an ancient volcanic fumarole, or opening, featuring hot springs of chemical-rich water like those in Yellowstone National Park. Dragging its wheel through the sand around Home Plate, Spirit turned up soils made of different layers of minerals. These layers were separated from each other in the geologically recent past, when thin films of water trickled in to the soil, dissolving some minerals and leaving less soluble ones behind.

At Meridiani planum, Opportunity was the first mission to study intact sedimentary rocks on Mars. It examined tiny spheres of hematite, dubbed “blueberries,” and layered bedrock, to determine the geologic history of the region. The visual and chemical evidence suggests that a large, salty body of water once pooled on the surface, sometimes evaporating to form sulfate-rich sands that were eroded and redeposited by wind in a desert environment, and later altered by groundwater. In 2011, after nearly 20 kilometers of driving among sand ripples, Opportunity reached much older rocks in the eroded rim of an ancient crater named Endeavour. The rover had lost two of its four science instruments and was plagued with memory problems, but with help from Mars Reconnaissance Orbiter, it found evidence of more benign, wet environments in Mars’ even more distant past.

"Our job was to wear these rovers out exploring, to leave no unutilized capability on the surface of Mars, and for Spirit, we have done that."
— John Callas, MER project manager, 2011

"Just think of some of the things that have happened back on Earth [during Opportunity's mission]. The entire Obama Presidency. The entire existence of Facebook. The Boston Red Sox winning the World Series three times! We've been on Mars a very long time."
—Steve Squyres, MER principal investigator, 2016

The two rovers landed nearly on opposite sides of Mars, a fact that facilitated mission operations and communications planning. 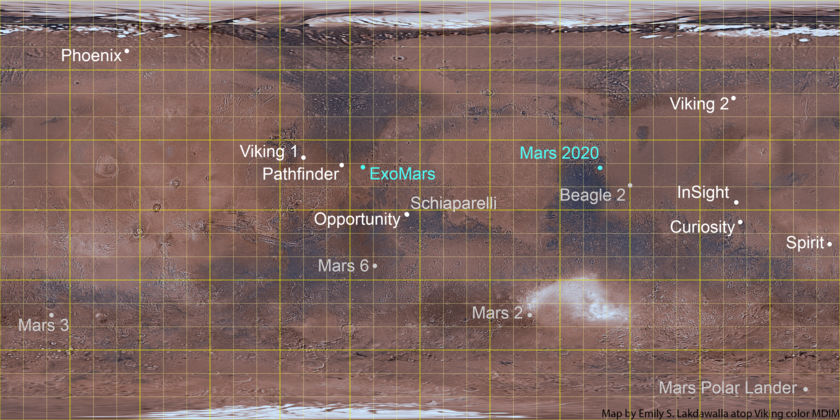 Spirit landed on the flat floor of Gusev crater at 14.5692°S, 175.4729°E. Gusev is a 160-kilometer-diameter impact crater with a flat floor and subdued peaks. Ma’adim vallis, an 800-kilometer-long outflow channel, enters it from the south and exits it from the north, making it a near-certainty that water once ponded in Gusev. Once Spirit landed, science team members discovered that any sediments that might have been deposited in Gusev’s floor were later covered by volcanic deposits, so they took the rover to the Columbia hills in search of more ancient rocks. 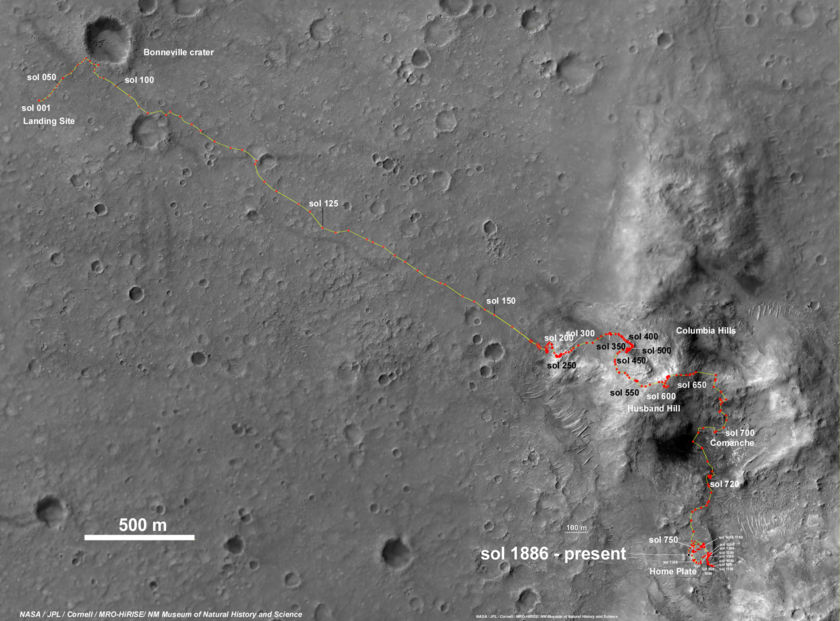 Opportunity landed within Meridiani planum at 1.948282°S, 354.47417°E. Meridiani planum contained large deposits of a dark-colored water-related mineral called hematite that were visible from orbit, as well as light-colored layered rocks. During its airbag-assisted landing, Opportunity fortuitously rolled into the 20-meter-diameter Eagle crater, which had punched a hole into the surface and exposed layered bedrock. Following work at Eagle, Opportunity embarked on a 15-year journey covering 44 kilometers of Meridiani planum and the rim of Endeavour crater, setting a distance record that is not likely to be broken on Mars for many years to come. 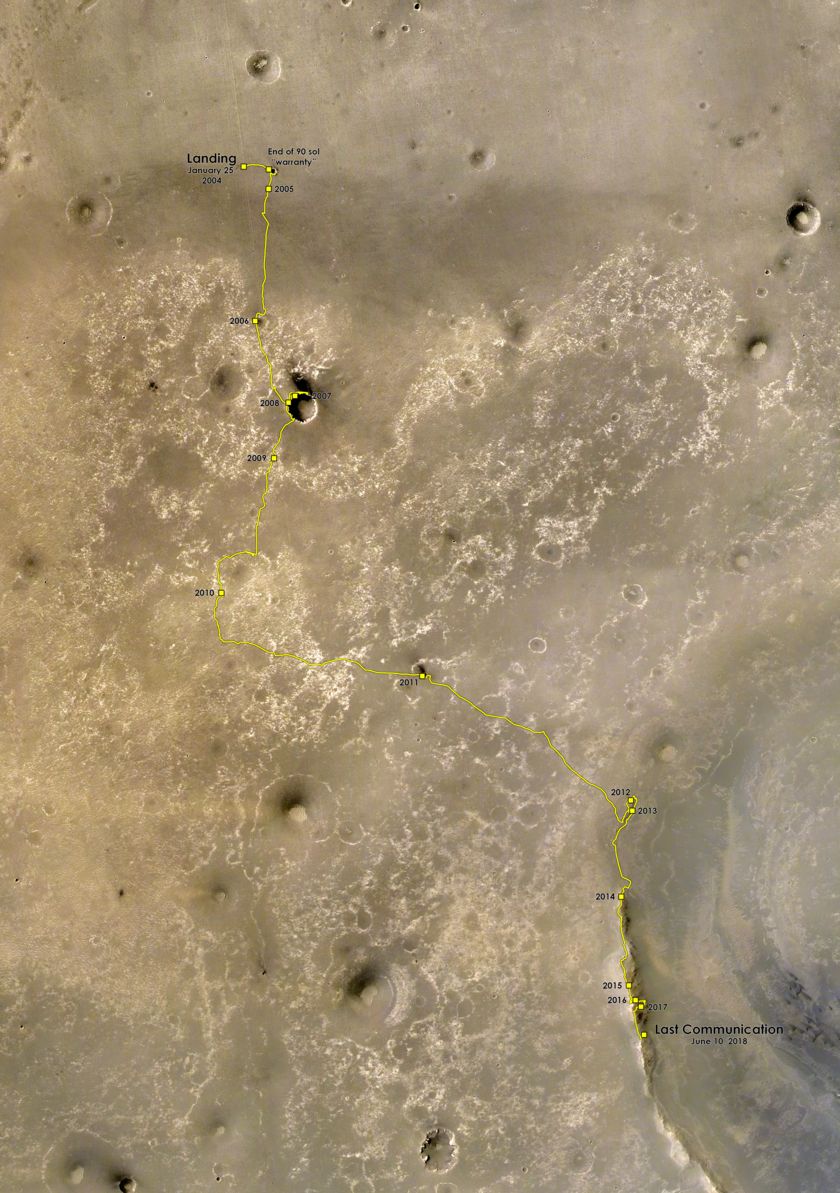 The base image for this map is a mosaic of Mars Reconnaissance Orbiter Context Camera images that has been colorized with Mars Express HRSC images. During its 14.5 years on the Martian surface, Opportunity traveled 45.16 km from its landing site in Eagle Crater. The site of its last communication with Earth (and presumably its final resting place) at Perseverance Valley lies almost exactly 25 km as the crow flies from its starting point. 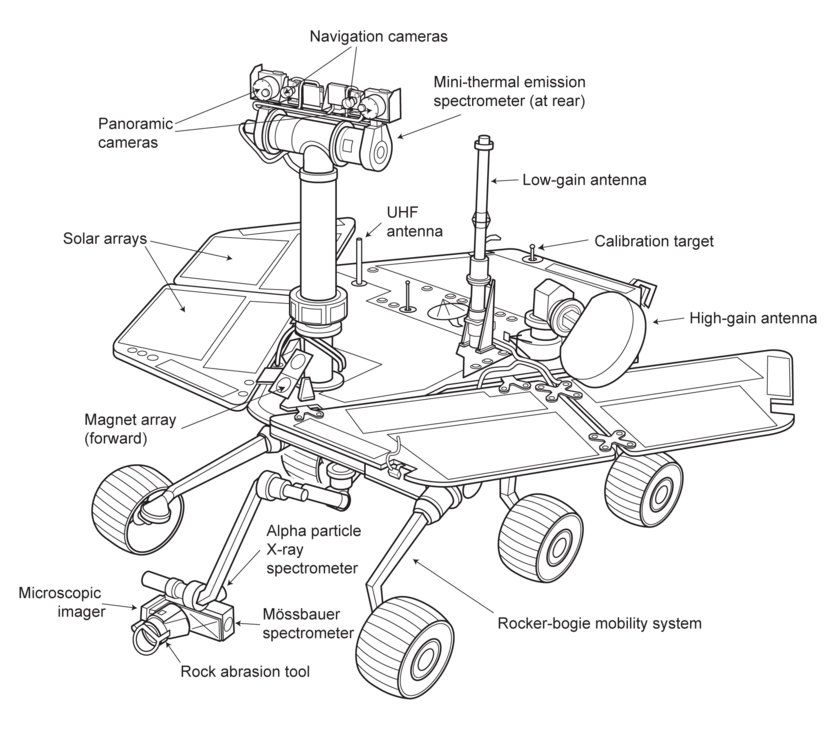 Rover dimensions: 1.5 meters from bottom of wheels to top of mast; 2.3 meters wingtip to wingtip; 1.6 meters front to back

Power: Bat-shaped solar panels that recharged lithium-ion batteries, providing a peak of 140 watts at landing time, up to 900 watt hours per sol

Microscopic Imager (MI): Monochrome camera mounted on the robotic arm. Allows each rover to take very close-up images of the surface of rocks or soils, seeing features as small as 0.1 mm across, providing clues to how those rocks and soils were formed. The MI was aided by the use of the Rock Abrasion Tool (RAT) to expose fresh rock surfaces. It had a very shallow depth of field (±3mm), so it commonly took many images at different distances that could be “focus merged” on the ground. Monochrome detector, 1,024 pixels square, 31mm FOV when in focus, pixel size 30 microns when in focus, spectral range 400-700 nm. Pancam images taken of MI targets have about 60 pixels across the MI field of view to provide color information. Principal investigator: Kenneth Herkenhoff. JPL MI facts | MI Merged Products | Herkenhoff et al. (2003)

Engineering cameras: Navigation cameras (Navcams) and Hazard avoidance cameras (Hazcams): Stereo, monochrome, wide-angle camera systems that provide the rover and its drivers with 3D information about the terrain in which the rover is operating. The Navcams weremounted at the top of the mast, and were steerable to 360° around the rover and +90°/-104° elevation, with a 45° FOV. Forward and rear Hazcams were fixed to the body of the rover just beneath the solar panels, boresighted 45° below the rover deck (front) and 35° (rear), and had a 124° FOV. Monochrome detectors, 1,024 pixels square, spectral range 600-800 nm. Team leader: Justin Maki. JPL engineering camera facts | Maki et al. (2003)

Miniature Thermal Emission Spectrometer (Mini-TES): Using the rover’s tubular mast as a periscope, Mini-TES  recorded the thermal spectra of various rocks and soils to determine the types and amounts of minerals they contained, detecting radiation in 167 different infrared “colors.” The instrument itself sat inside the body of the rover, surveying the landscape using a tiltable mirror within the mast head for the vertical direction and panning of the mast head for the horizontal direction. Design heritage from the Thermal Emission Spectrometer aboard the Mars Global Surveyor spacecraft. Opportunity’s Mini-TES failed after its mirror was contaminated during the dust storm of summer 2007. Spectral range: 5–29 μm (339.50 to 1997.06 cm−1) with a spectral sample interval of 9.99 cm−1. Spot size 20 mrad (about 75 Pancam pixels). Principal investigator: Philip Christensen. JPL Mini-TES facts | Christensen et al. (2003)

Mössbauer spectrometer (MB): Mounted on the arm, MB sensitively detected the presence and abundance of iron-bearing minerals. It used a radioactive cobalt (57Co) source to generate gamma rays that were absorbed and then emitted by iron atoms in the target at slightly different wavelengths depending on the crystal structure in which the iron sat. Observations took hours so were typically performed overnight (or over many days). Because the half-life of 57Co is only 271 days, the performance of the Mössbauer degraded over time, requiring longer and longer integrations; Spirit’s was used until the end, but longer-lasting Opportunity’s became useless after sol 2879. Principal investigator: Göstar Klingelhöfer. JPL MB facts | Mössbauer Effect website | Klingelhöfer et al. (2003)

Alpha Particle X-Ray Spectrometer (APXS): Mounted on the arm, APXS detected the elemental composition within the top few micrometers of rock and soil targets. It used alpha-particle and X-ray sources (radioactive curium, 244Cm) to irradiate the target and measured the wavelengths X-rays that were emitted in return. Observations were best quality when done overnight, but major elements could be detected in a few hours with “touch and go” observations. With a half-life of 18.1 years, the curium sources did not decay enough during the missions to affect data quality. Very similar to APXS instruments on Mars Pathfinder and Curiosity. Principal investigator: Rudi Reider. JPL APXS facts | Reider et al. (2003)

The magnet array was a group of magnets mounted on the front of each rover, on the rover deck, and inside the RAT. They gathered magnetic particles for examination with the rover's cameras and spectrometers. Since magnetic minerals carried in dust could have formed in watery environments, scientists were interested in the composition of Martian dust. Team leader: Marten Madsen. JPL magnet array facts | Madsen et al. (2003)

A MarsDial (a Martian sundial) was mounted to each rover deck, to help the Pancam team calibrate the color and brightness of their images. It featured three gray regions and four colored regions, as well as a vertical post that casted a shadow across part of all three gray regions at some time between 10:00 a.m. and 2:00 p.m. (local Mars time) every day. They remained useful for calibration throughout the mission despite accumulation—and blowing away—of dust. JPL calibration target facts | MarsDial design

Note: The Mars Exploration Rover team publishes many of their papers in the American Geophysical Union’s Journal of Geophysical Research, which makes all papers open-access 24 months after publication.