Of Rings and Resolution

"Come with us now as we set out on this voyage of exploration. We have over three billion kilometers to go! It will take more than six years to reach Saturn. We will get there on July 1, 2004. By the end of the Cassini-Huygens mission, four years later, we will have completed the most complicated scientific experiment ever performed."

This is a passage from the introduction to a booklet titled Passage to a Ringed World, which NASA published in 1997, the year that the Cassini-Huygens mission embarked on its long journey to the Saturn system. It was edited by Linda J. Spilker, the mission's project scientist (then the deputy project scientist). 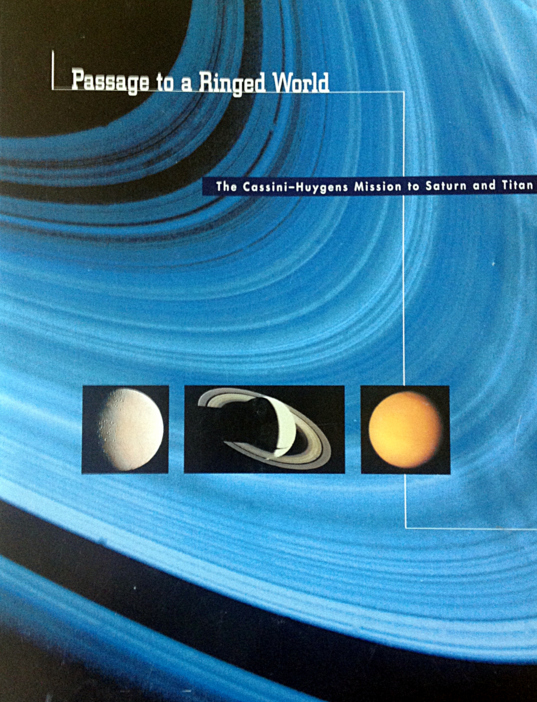 Passage to a Ringed World

A 1997 NASA book previewed the Cassini mission, which launched that year.

The book laid out the expedition's plans in some detail. It reviewed what was known about Saturn and its mini-solar system of icy moons, and what remained mysterious. It showed how the mission's robotic spacecraft, the Cassini orbiter and the detachable Huygens probe, would speed past three planets before they finally reached their destination. Once there, the book explained in a series of charts and graphs, the mission would carry out an unprecedented exploration, with 12 scientific instruments mounted on Cassini and six more carried in the Huygens probe, which would seperate from the mothership orbiter, and brave a thick veil of clouds to land on the planet-like moon Titan.

It's been almost 10 years since Cassini entered orbit on July 1, 2004. The mission, it's safe to say, succeeded. 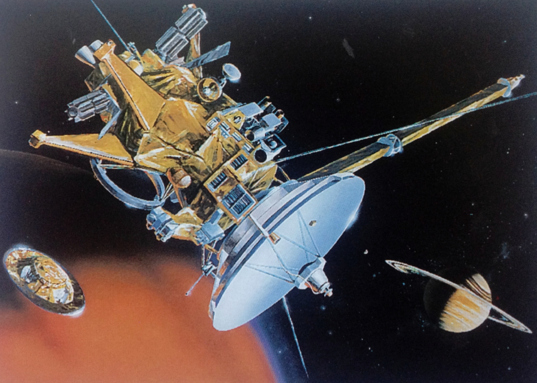 Before the mission began, an artist imagined what Cassini and the Huygens probe might look like at Saturn.

It's a delight to peruse Passage to a Ringed World, with its looping orbit charts that look like flowers opening and closing over time. It's fun to study the detailed diagrams of science instruments, some still untested in deep space, and what their creators hoped they might see. This pleasure comes not only in light of Cassini's success, but also because the book is a time capsule containing the carefully laid plans of hundreds of scientists and engineers from 17 nations over the course of more than three decades. It's a reminder of how complex and ambitious this undertaking is, how hopeful.

But the best part are the pictures! The book is full of artists' renditions of the then-mysterious phenomena at Saturn, and of the best available photography, most of which came from the Voyager missions and the Hubble Space Telescope. Here is a small sampling, showing photos from the book followed by Cassini images.

First, a look at Saturn's F ring and shepherd moons, provided by Voyager. 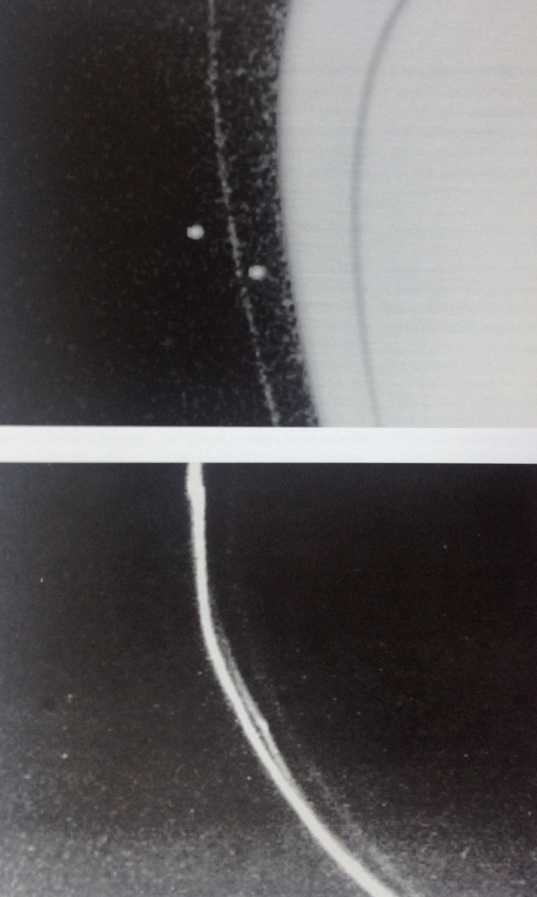 A Glimpse of the F Ring

Voyager's views of Saturn's F Ring and the shepherd moons Prometheus and Pandora, as shown in NASA's 1997 book, Passage to a Ringed World. 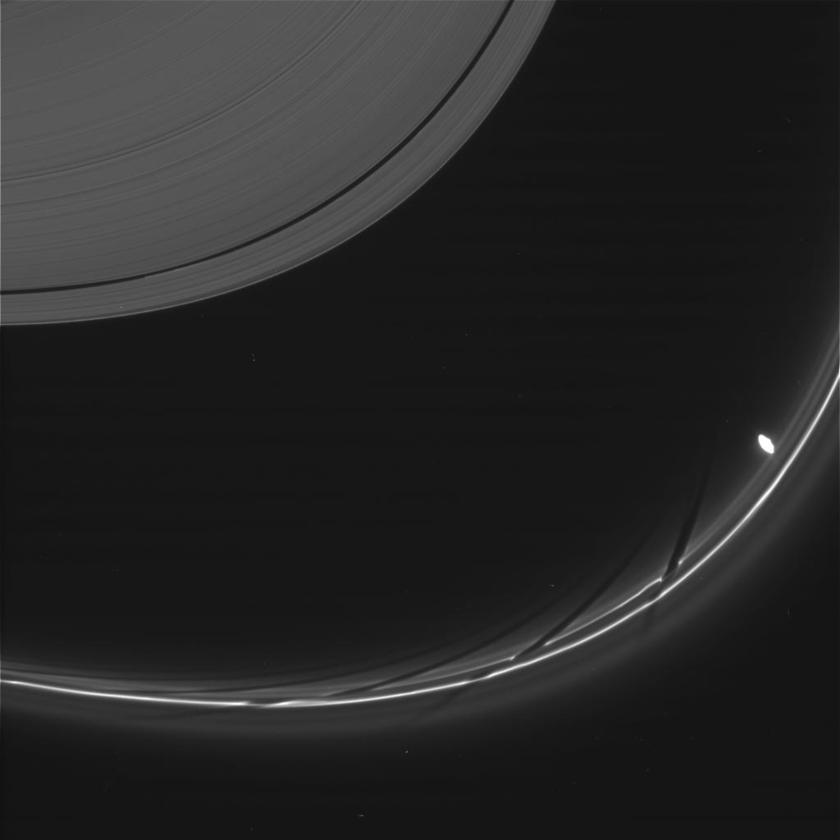 Saturn's F Ring: billions of icy particles strung into ropy filaments by the gravity of small shepherd moons, and set aglow by sunlight. This sequence of images was captured by Cassini on 14 February 2013. I've removed some of the visual noise caused by cosmic rays hitting the imaging sensor.

NASA's 1997 book, Passage to a Ringed World, included this composite showing some of the best images--at the time--of the small satellites of Saturn. Clockwise from left: Atlas, Pandora, Janus, Calypso, Helene, Telesto, Epimetheus, and Prometheus. 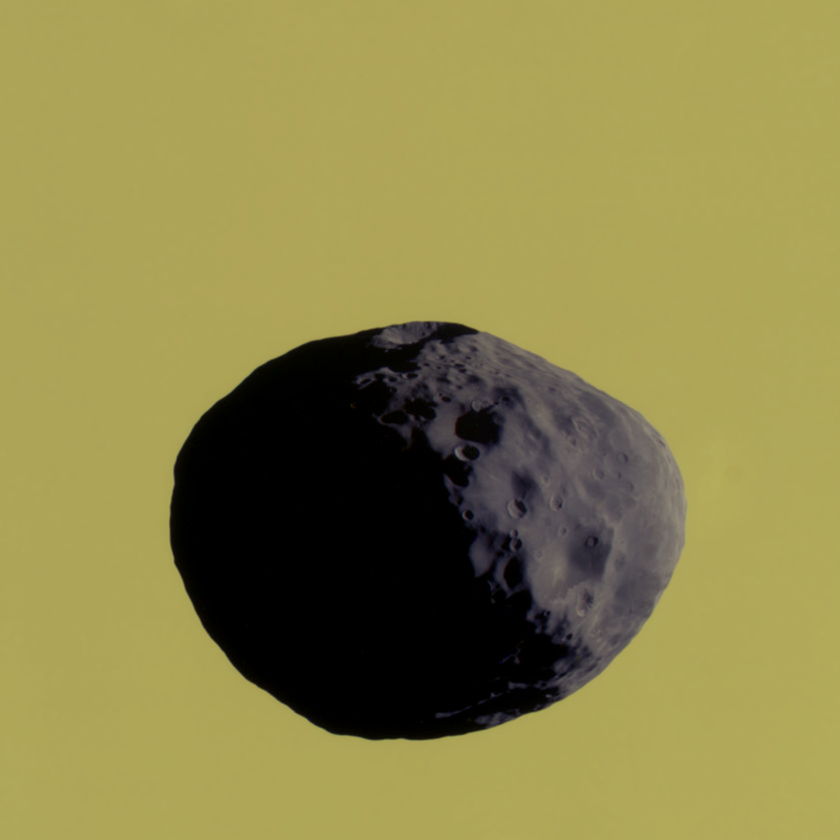 Around 27 March 2012, Cassini took lots of great photos of Saturn's moons. This one shows Janus, a moon about a third the diameter of Enceladus that orbits between the F and G rings. The background is yellow in this infrared-green-ultraviolet color composite because the moon is sitting in front of Saturn. There is a surprising range of albedo variations across Janus and within its craters; in fact, it reminded Emily Lakdawalla of contemporaneous views from Dawn at Vesta. Janus is quite a bit smaller than Vesta, but it's made of weaker stuff (ice, rather than rock); Vesta-sized icy moons look much smoother. But Janus doesn't have as many craters as Vesta does. It took quite a bit of work on the component images, which were taken from Cassini's raw images website (UV, green, IR), to erase the bright marks of energetic particles striking Cassini's camera detector; that work involved some paining on Janus, especially on its night side, and the use of the Photoshop dust and scratches filter on Saturn. Two frames were resized very slightly to compensate for Cassini's changing distance to Janus in the time separating the capture of the three frames. 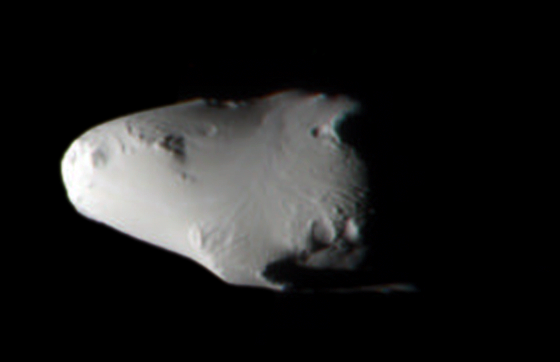 Calypso, only 34 x 22 x 22 kilometers in diameter, occupies the L4 Lagrangian point in Tethys' orbit -- it sits in a point 60 degrees ahead of Tethys. 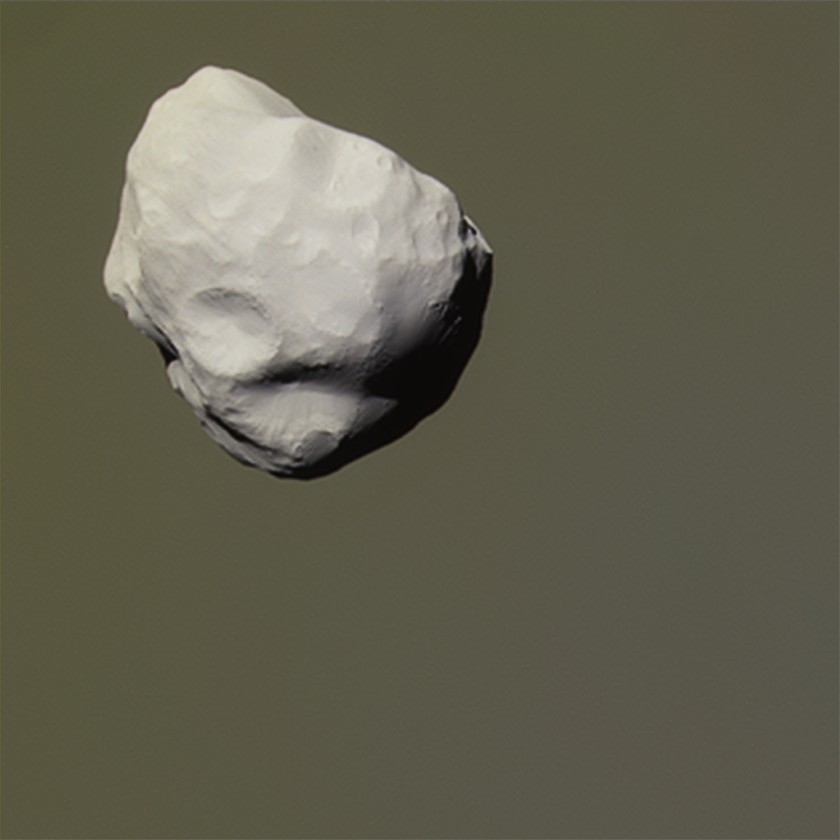 On 3 March 2010, Cassini flew closely by Helene and caught several images of it silhouetted against Saturn. 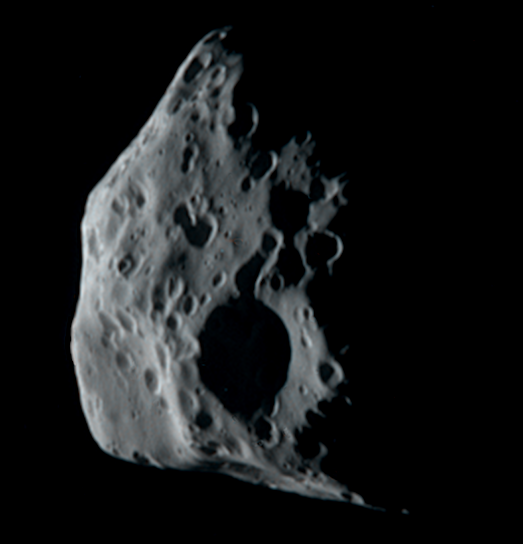 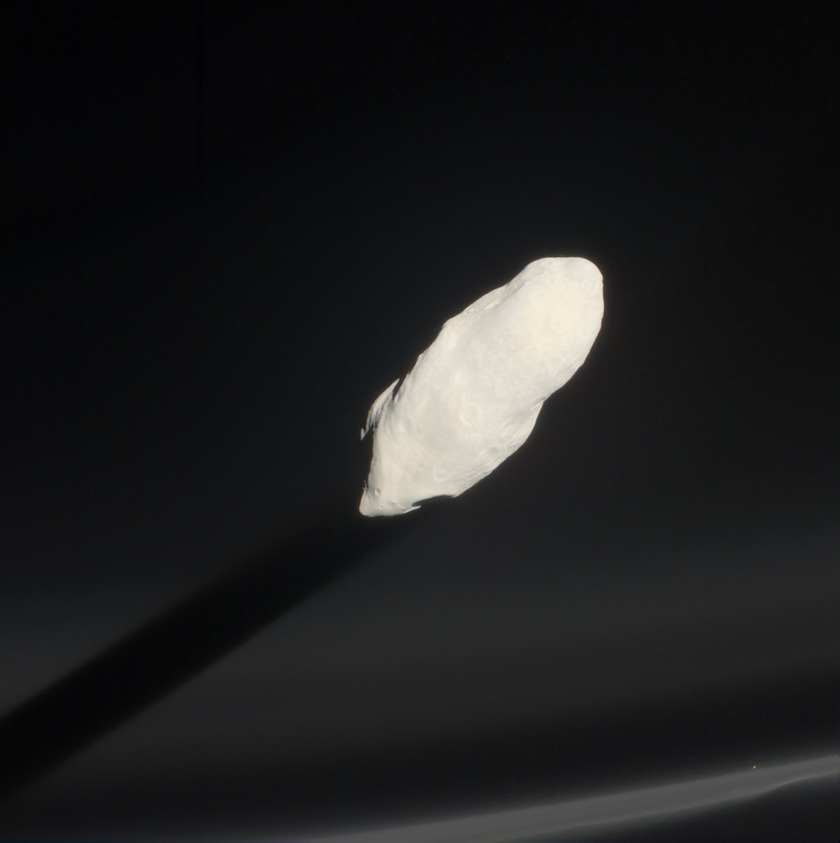 Cassini captured the three images for this true-color view of the inner F-ring shepherd Prometheus on 27 December 2009. This view was composed of archive data by Gordan Ugarkovic. Prometheus is 119 × 87 × 61 kilometers in diameter.

Before Cassini, the two-toned moon, Iapetus, was an intriguing mystery. 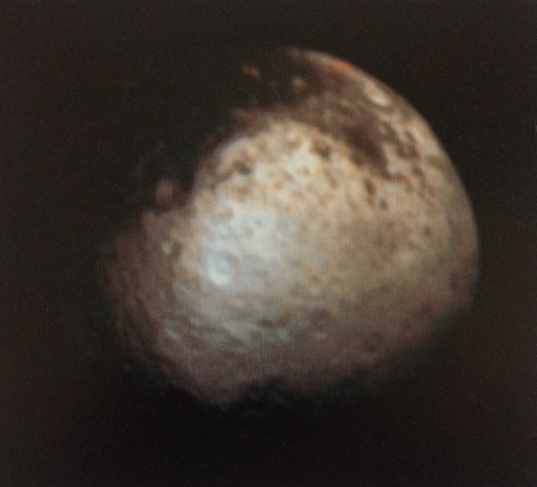 A Voyager 2 image of Saturn's moon Iapetus, as shown in NASA's 1997 book, Passage to a Ringed World.

OK, it still is. But Cassini has achieved some beautiful observations that are helping scientists get to the bottom of it. 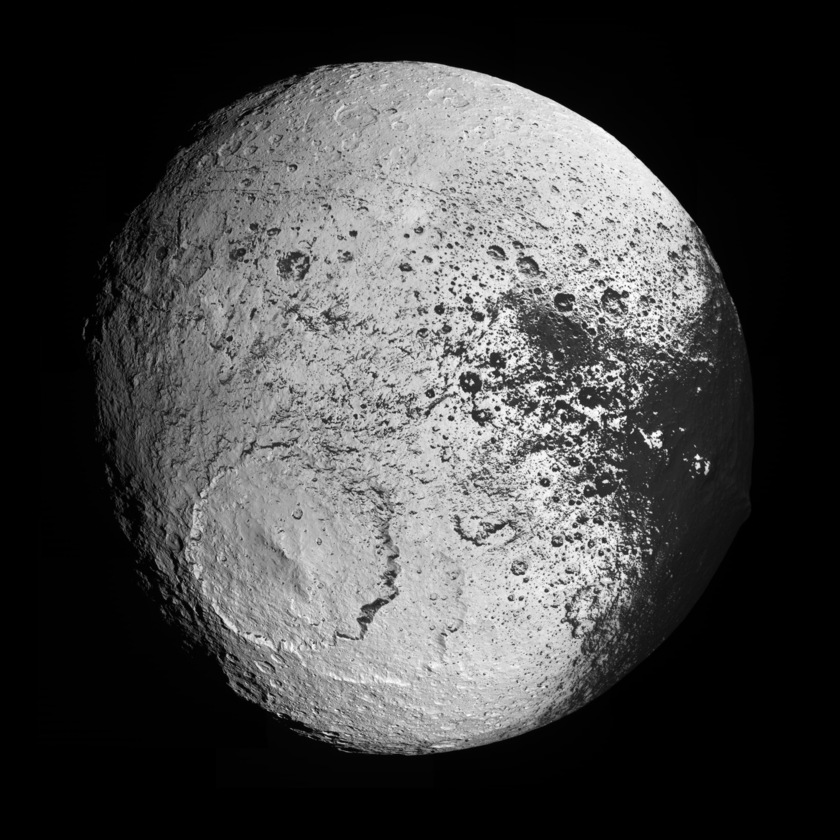 Cassini took the images for this view across all of Saturn's main rings with its wide-angle camera on 17 April 2009. A shadow of one of the moons (perhaps Mimas?) is being cast on the rings.

Here are two of the smaller moons, composed largely of water ice, Enceladus and Mimas. 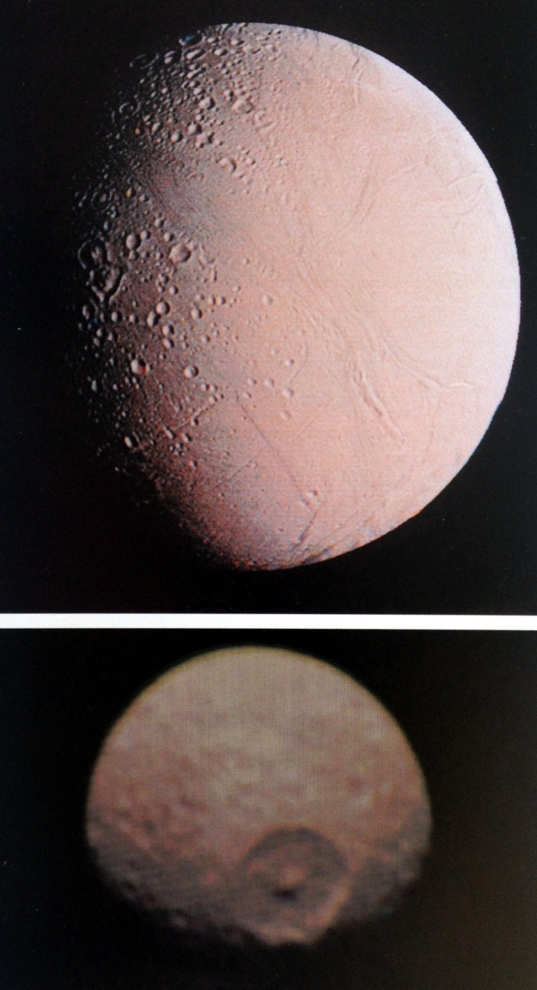 Saturn's moons Enceladus (top) and Mimas, as shown in NASA's 1997 book, Passage to a Ringed World.

Despite the hopes of Star Wars fans, Mimas turns out be just a moon after all. 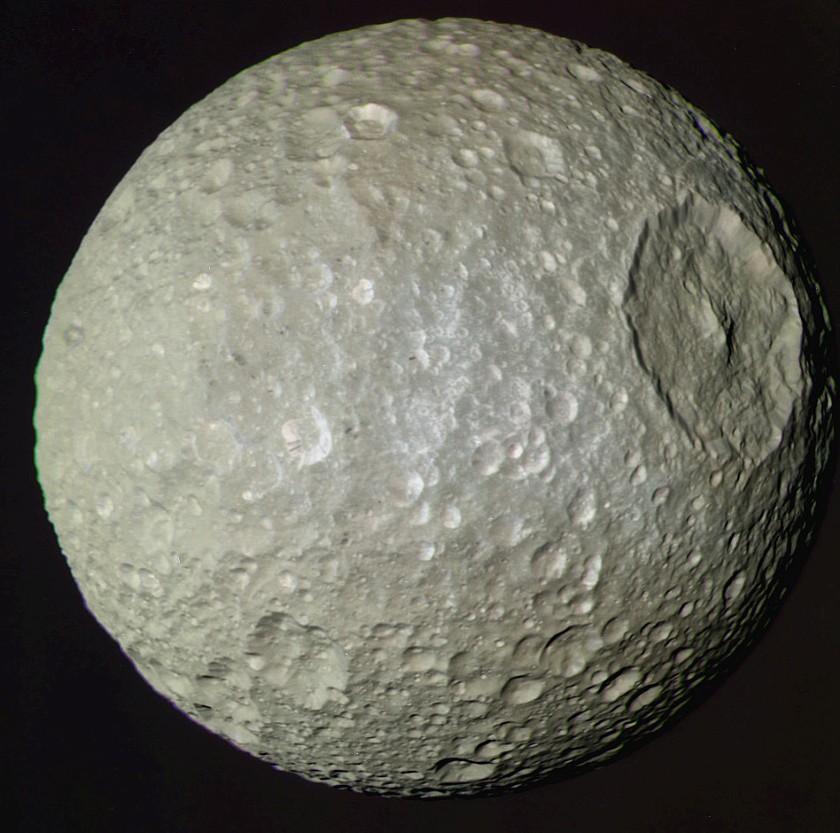 Cassini was about 71,500 kilometers from Mimas on 13 February 2010 when it captured the images for this false-color composite. Images taken through infrared, blue, and ultraviolet filters produce a view of the moon that emphasizes the interesting bluish color splotch on its leading hemisphere, centered on the giant crater herschel. The alignment of the color frames is not perfect because when it is as close to Saturn as Mimas' orbit, Cassini is moving very rapidly, so Mimas appeared to rotate from color frame to color frame. The background is not perfectly dark because Mimas was poised in front of Saturn at the time that these photos were taken.

But of all Cassini's revelations, what could be more dramatic than the active geysers of Enceladus? If there is one image I wish I could go back in time to show the authors of Passage to a Ringed World (just to show them their late nights would pay off) this would be it. 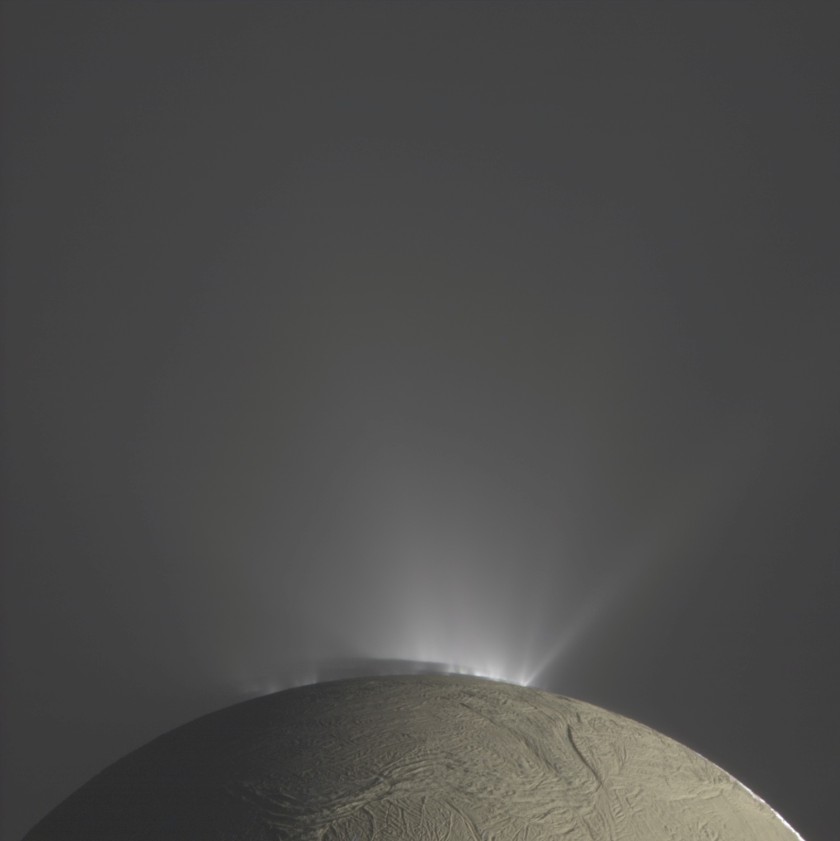 Fountains of Enceladus in Saturnlit color

Here is Enceladus, its south polar plumes lit by sunlight, its seamed nightside washed with the yellow glow of Saturnlight.

It's important to remember something else. Not only did Cassini's cameras give us higher-resolution pictures, but all the other instruments, RADAR, radio, etc. resolved long-standing questions as well.

"Exploration is instinctive in us," the book reminds us. "The Cassini-Huygens mission is another way for us to extend our senses physically to new places and over a broader range of phenomena. Beautiful Saturn, with its rings, its moons and its many other wonders, beckons us to explore and uncover its secrets, to partake in the thrill of discovery. Cassini-Huygens is the vehicle."

We have just a few years left to ride along with that vehicle. After that, there are no more missions to Saturn even planned. It's a good time to savor Saturn as it comes into sharper resolution. 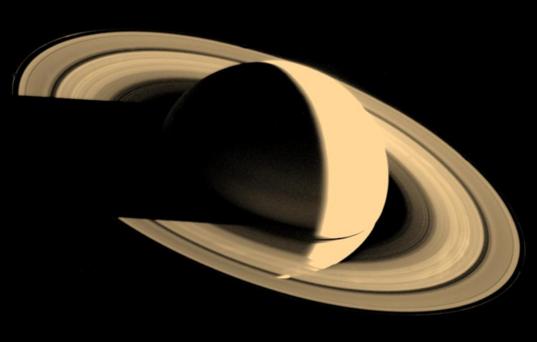 In Saturn's Shadow (The Day the Earth Smiled)

On 19 July 2013 Cassini passed into Saturn's shadow and turned toward the Sun, capturing an image of the planet's night side and the weirdly lit semi-transparent rings. Cassini also captured seven of the moons and three planets. This was the third time our home planet was imaged from the outer solar system; the second time it was imaged by Cassini from Saturn's orbit; and the first time ever that inhabitants of Earth were made aware in advance that their photo would be taken from such a great distance.

Thanks Bill, wonderful befores and afters! One must wonder what new vistas we would witness with similar orbital missions to Uranus and Neptune. I hope we don't have to wait too many decades to find out.

Beautiful images and a wonderful article! (The Janus image link is broken and I reported it today)