UPDATE 29 NOV 2017: Google has updated the app to include Callisto, Tethys, and Charon!

Last week, Google Maps released several new map products that allow you to see the locations of named features on many solar system planets and non-planets. The mapped worlds include Mercury, Venus, our own Moon, Mars, Ceres, and Pluto (but not Charon, sadly). Three out of four large Jupiter moons make the list: Io, Europa, and Ganymede, but not Callisto. All but one of the round Saturnian moons is listed: Mimas, Enceladus, but not Tethys for some reason, Dione, Rhea, Titan, and Iapetus. It's handy to be able to rotate the moons to match the aspects of space photos, though I wish the angle of illumination could be changed. But these aren't true 3D shape models, they're just maps stretched over spheres. 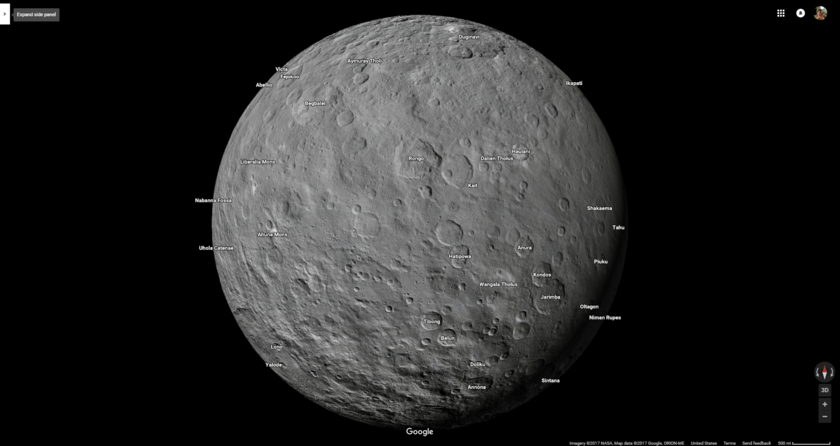 I didn't post about this last week because maps for almost half of the worlds didn't align properly with the features. That problem has now been fixed. Google hadn't been aware that there's no common convention for how you center simple cylindrical maps, and some of the maps they'd been given were centered at 0 degrees longitude, while others were centered at 180. Ganymede, Mimas, Enceladus, and several others all had the map names perfectly opposite the globes to where the features were actually located. I'm bemused that there were a lot of Web articles about the Google maps last week that pointed to the new service but said the maps were wrong, pointing to my tweet about it. Serious question to the space journalists who did that: why would you tell your readers about a set of maps that are wrong? I waited until I was sure they'd been fixed before posting this article.

The maps are a neat tool that I expect to make a lot of use of, but they're fairly simple so have limits. They aren't very smart about linear features; one place name has to do for the entire linear feature, and the place name isn't oriented parallel to the linear feature, so where there are a lot of such features in one place, like on Europa, it can be tough to figure out which place name corresponds to which line. The maps intelligently display names for only the largest features when you're zoomed out, which is usually useful, except when it comes to small craters with big ray systems. They may be highly visible features even at great distance, but their names don't show up unless you zoom way in. Finally, polar features on the map of Enceladus don't quite fall in the correct spots, I think because the map projection assumed Enceladus was spherical when it's actually noticeably flattened. For real detail in maps, it's better to look at the ones created by the United States Geological Survey, which are much more reliable. I just posted all their maps of Saturnian moons to our image library. But for spinning globes and matching them to photos, the new Google maps are a valuable service, and I'm glad it's here! 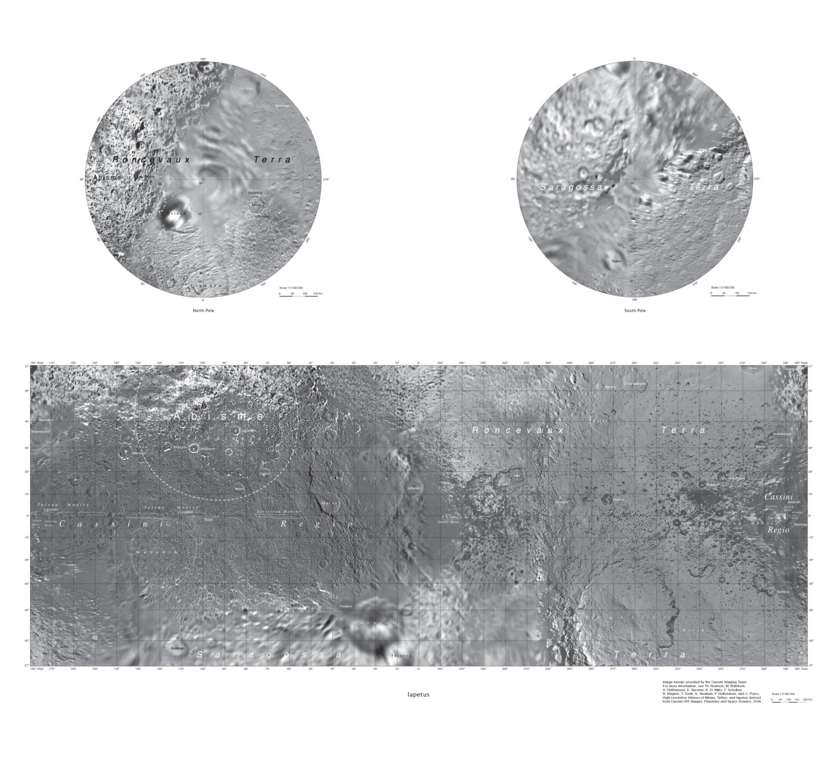 Map of Iapetus with place names

A mosaic of Cassini images overlaid with place names for Iapetus as of October 2017. Download this map as a PDF file. Visit the IAU/USGS Gazetteer of Planetary Nomenclature for up-to-date maps and name origin information.

Thanks for posting this. I assume google will build on this and expand. The basics are similar to what Celestia offers (on an already much grander scale); which reminds me that I have to update the 'coatings' of many bodies. Pluto and Enceladus came out well here, with Pluto's 'backside' (i.e. its 'heartless' side) not having been photographed from close up, but once you spin it looks great. Among the limitations being that you can't really go all around each body in any direction you like, e.g. with Enceladus you can't pass the south pole north-south way. But it's a good start. Maps on the linked page: awesome! :)

After reading "Project Orion, the true story of the atomic spaceship" many years ago, I have always been fascinated with the idea of exploring the outer solar system. The possibility of subsurface oceans is incredibly exciting! I think the planetary society would do well to promote such journeys. Small submarines could be transported on atomic spaceships to these icy bodies and melt their way down and into new underwater worlds. What if they are living worlds? And how many could their be? Ceres for starters and at the end Triton. Pluto and Charon are probably just too far even for bomb-propelled spaceships. The Moons of Jupiter, Saturn, and Uranus add Europa, Ganymede, Callisto, Titan, Enceladus, Rhea, Tethys, Dione, Mimas, Iapetus, Titania, Miranda, Umbriel, Ariel, and Oberon bring the grand total to 17 gravitationally rounded places life could exist in liquid oceans in the solar system.