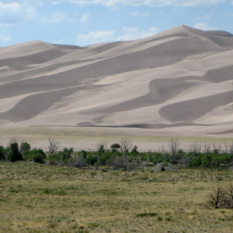 Sands on Earth, Sands on Mars

One of the ways that planetary scientists try to understand the origin and evolution of landforms on other planets is by studying similar kinds of landforms or "analogs" here on the Earth. For the past few days I've been working with a group of colleagues doing just that--specifically, studying dunes in the Great Sand Dunes National Park and Preserve in order to try to better understand the nature of sand dunes on Mars.