A Voyage to Mercury, and the Latest in Space Policy

BepiColombo Spots Earth and the Moon

Europe and Japan's BepiColombo spacecraft took these images of Earth and the Moon in early March 2020 as it sped towards an Earth flyby on 10 April. Before it can enter Mercury orbit in 2025, BepiColombo, which launched in 2018, must make 1 flyby of Earth, 2 flybys of Venus, and 6 flybys of Mercury.

Getting to Mercury isn’t easy. To reach the right speed to enter orbit around the innermost planet, BepiColombo has to make 1 flyby of Earth, 2 flybys of Venus, and 6 flybys of Mercury. The spacecraft launched in 2018 and will arrive in orbit in 2025. 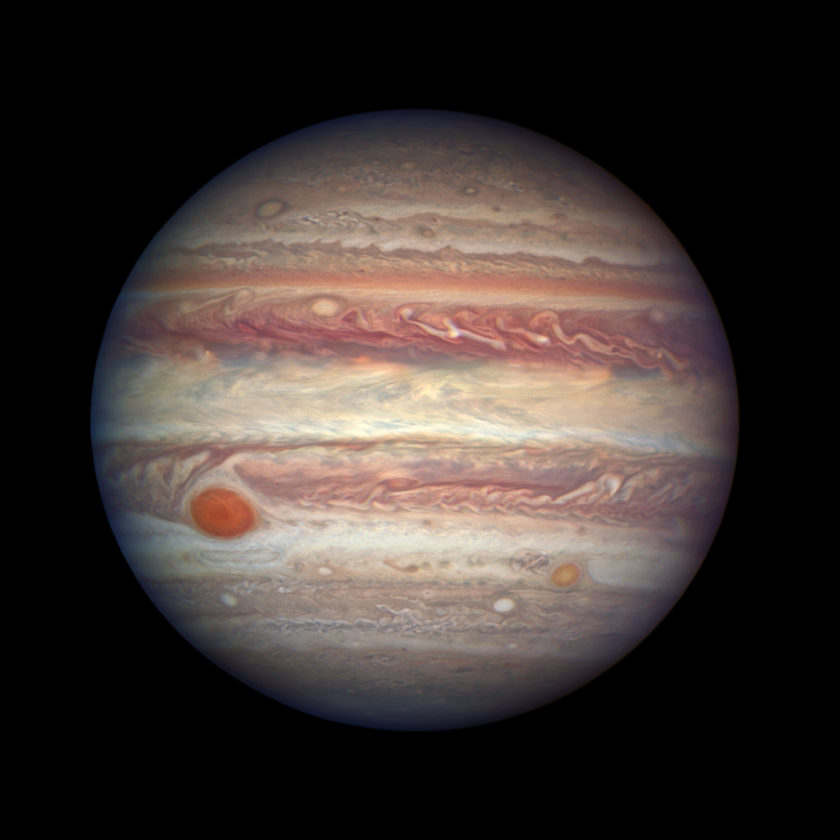 This image of Jupiter was taken by the Hubble Space Telescope when the planet was closest to Earth in 2017. The Great Red Spot appears on the left side, along with a smaller, reddish storm in the lower right dubbed "Red Spot Jr."

NASA kicked off a month-long celebration leading up to the Hubble Space Telescope’s 30th birthday. Hubble launched aboard Space Shuttle Discovery on 24 April 1990. One fun birthday feature allows you to view images that Hubble captured on your birthday. Pictured: An image of Jupiter taken by Hubble on this day, 3 April, in 2017.

Scientists published new findings about Uranus using data collected when NASA’s Voyager 2 spacecraft flew by the planet in 1986. For just 60 seconds of its 45-hour-long encounter, Voyager 2 appears to have flown through a plasmoid—a bubble inside of Uranus’s magnetic field. The findings have implications for how giant planets lose their atmospheres.

CHEOPS, the European Space Agency’s CHaracterising ExOPlanet Satellite, has completed its commissioning process and is now ready for science operations. CHEOPS, which launched in late 2019, will precisely measure the diameters of known exoplanets. Learn more about why and how we study exoplanets, and The Planetary Society’s exoplanets research.

NASA selected SpaceX as the first cargo delivery firm for the Gateway, a small space station the agency is planning in lunar orbit. SpaceX will build a larger version of its Dragon crew and cargo vehicle called the Dragon XL for the supply missions. Upon delivering supplies to the Gateway, Dragon XL would remain docked there for up to a year.

If you’re working from home now, you’re likely using video chats more than ever. Since some services like Zoom allow you to create virtual backgrounds, our Solar System Specialist Emily Lakdawalla has curated a collection of space images that you can use as backgrounds to help you show off your affinity for space. 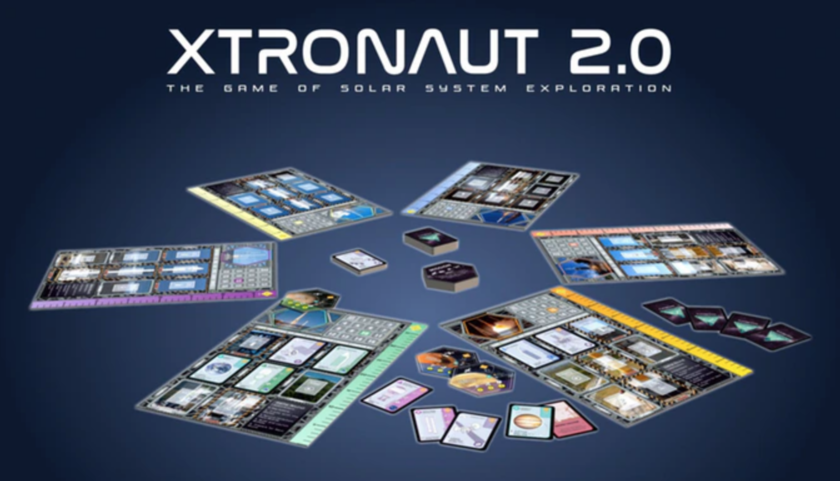 The Kickstarter campaign for the coolest new space board game, XTRONAUT 2.0, has been extended! Created by OSIRIS-REx principal investigator Dante Lauretta, this fun and educational game lets players plan space missions and explore the solar system. Backers now have until 10 April to contribute to launching this game and receive awesome new rewards. 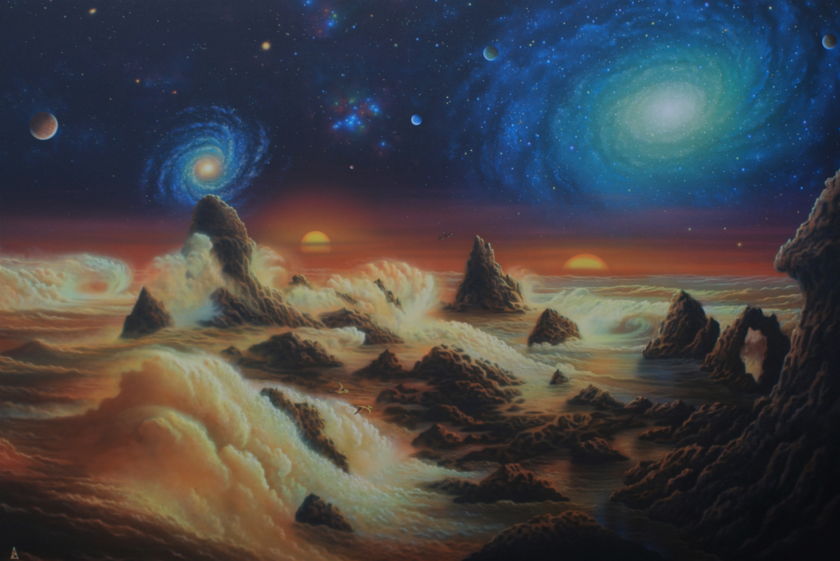 Planetary Society member Andrew C. Stewart shared this painting with us, titled “Cosmic Ocean.” You can find more of his artwork on his website.

Do you love to make art? Is creativity something you’re practicing to get through these difficult times? We want to hear from you! Every issue of our quarterly print magazine, The Planetary Report, features space art on the back cover. We also occasionally feature space art in this weekly newsletter, The Downlink, when we come across pieces that we love. We feature our members everywhere we can, so we’re calling out to you to send us your space-inspired artwork. You can send your work to our Community Engagement lead at kate.howells@planetary.org, or by replying to this email.

Pictured: Planetary Society member Andrew C. Stewart shared this painting with us, titled “Cosmic Ocean.” You can find more of his artwork on his website.

Venus continues to put on a spectacular show, shining brightly in the evening sky above the Moon. If you’re up early enough, you can also catch Jupiter, Mars, and Saturn in the pre-dawn sky. 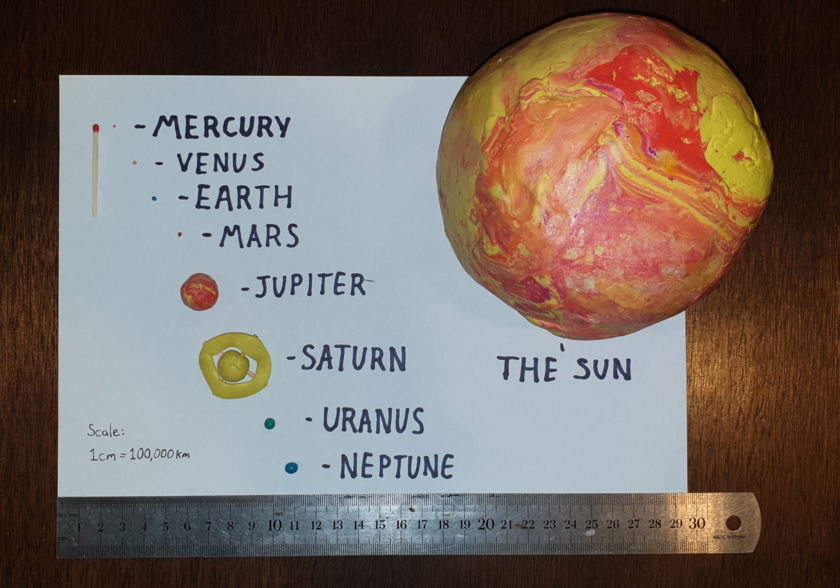 Planetary Society member David Haynes, of Canberra, Australia, sent us this suggestion for a fun and educational space activity for kids. David created scale models of the planets in our solar system, at a scale of 1 cm to 100,000 km. You can add to this activity if you’re able to find a wide-open space like a country road, where you can lay the planets out at their relative distances from the Sun. At this scale, Neptune is 450 m from the Sun. David says: “Experiencing Earth in this context (not to mention the other star systems and galaxies) helps give a cosmic perspective to drive home how special our home world is—harbouring life in the immense void.”