Video Chat From Outer Space With These Custom Wallpapers

With much of the world now stuck at home due to the COVID-19 pandemic, it seems like the whole world — adults, kids, babies, cats, and dogs — is now using video-conference software to stay connected. Since some services like Zoom allow you to create virtual backgrounds, I thought I might offer you the opportunity to take your home office to Mars, or the Moon, or other fun places in space.

Here’s a collection of images sized and cropped specifically for use as backgrounds for video. They’ll work as desktop and phone backgrounds as well. Have fun with them! Make your colleagues guess where you are! If you have requests for other backgrounds, ask me on Twitter. I’ll probably add to this collection as time goes on.

Let’s start at Mars, where Opportunity once spent months stuck in the same spot, called Rub Al Khali for its resemblance to the Arabian desert. I’ve always found this panorama very peaceful, even though getting stuck was mildly scary to me at the time that it happened. 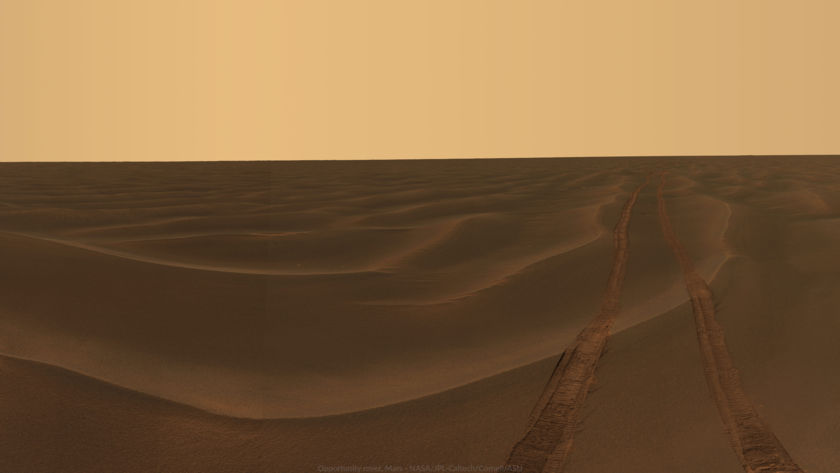 This is the Opportunity Pancam "Rub al Khali" panorama, acquired in the plains of Meridiani on sols 456 to 464 (6 to 14 May 2005) from a position about 2 km south of Endurance crater at a place known informally as "Purgatory Dune," where the rover was stuck in the deep fine sand for more than a month.

If you’d like to have a rover peeking over your shoulder like a pirate’s parrot as you speak, try out this view of Curiosity atop Vera Rubin Ridge. 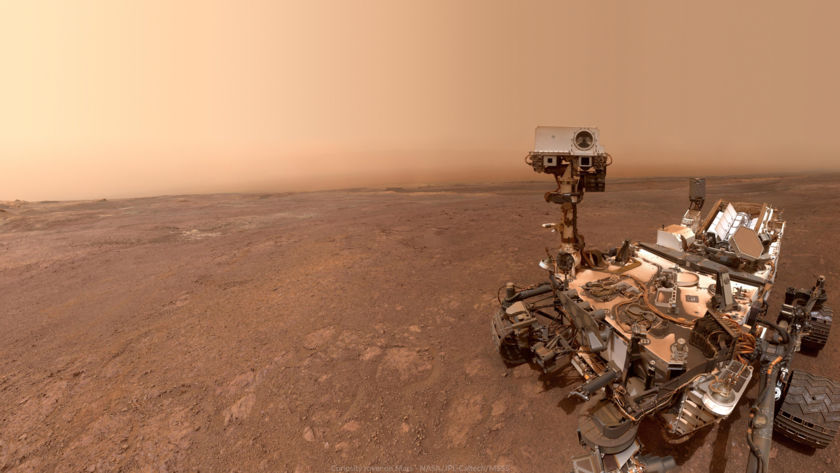 If you’re a Spirit fan and want to broadcast from the flank of the highest mountain a rover has (yet) climbed on Mars, here you go. 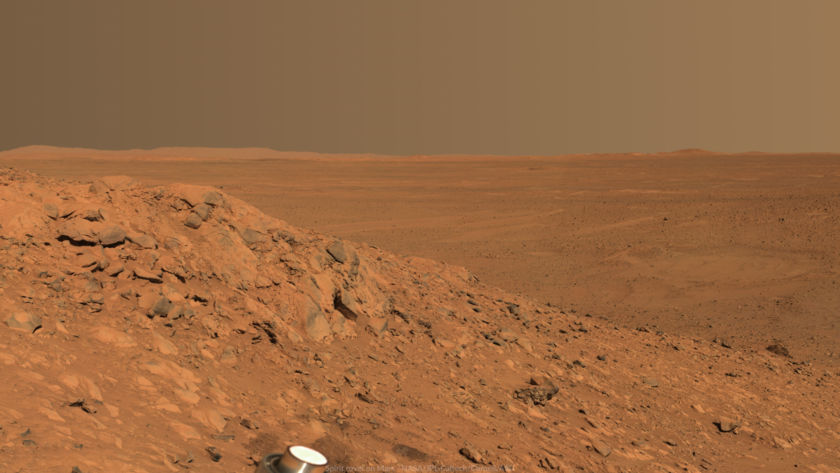 This stunning image mosaic of the Columbia Hills includes rocks that show evidence of past alteration by water. This approximate true-color image, nicknamed the "Cahokia panorama" after the Native American archaeological site near St. Louis, was acquired between sols 213 to 223 (9 to 19 Aug 2004). Because the rover was parked on a steep slope, it was tilted approximately 22 degrees to the west-northwest.

Okay, let’s go to the Moon. I just love the Lunar Reconnaissance Orbiter oblique shots of lunar landscapes, like this one across part of Orientale basin. 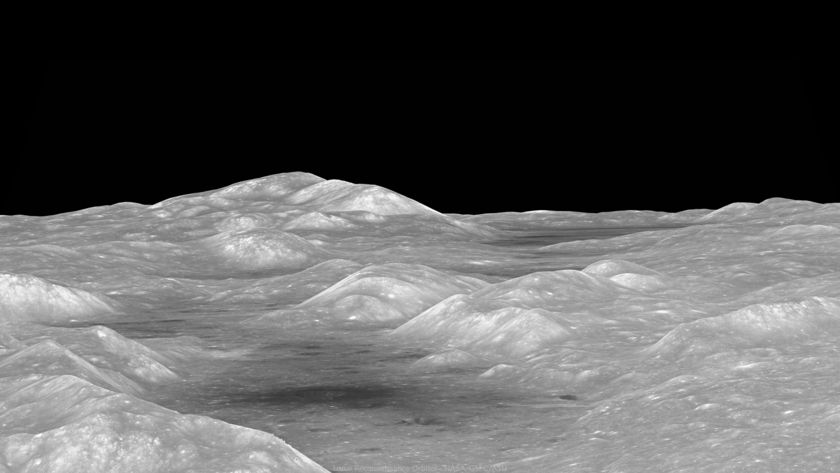 Lunar Reconnaissance Orbiter took this photo of the Moon's Orientale basin on July 1, 2016, from an altitude of 79.3 kilometers, gazing toward the east. The view is about 13 kilometers wide. The rounded mountains at both sides are two of Orientale's rings. Click for different-size wallpaper download options.

This panorama from Apollo 17 is one of my favorites. Most of the Moon is very gray, but here at Shorty crater, Schmitt and Cernan found colorful orange soil. 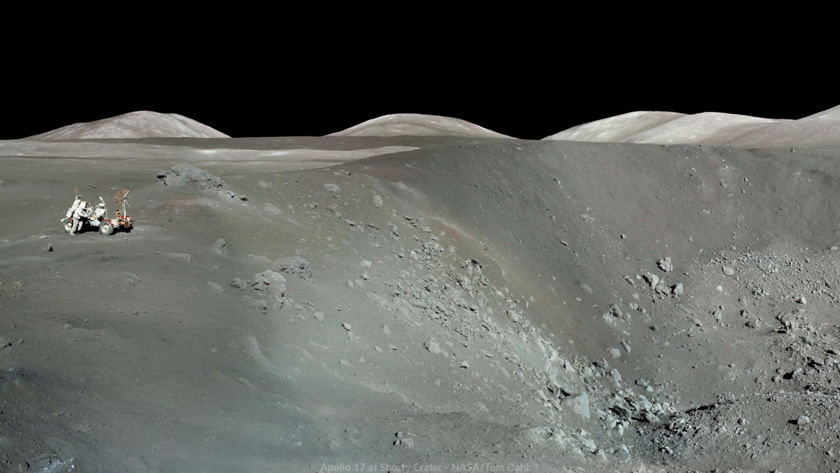 Harrison Schmitt works at the LRV at Shorty Crater, while Gene Cernan photographs him, on December 12, 1972. Click for different-size wallpaper download options.

It’s also hard to beat this panorama, which is one of the few that contains Neil Armstrong. 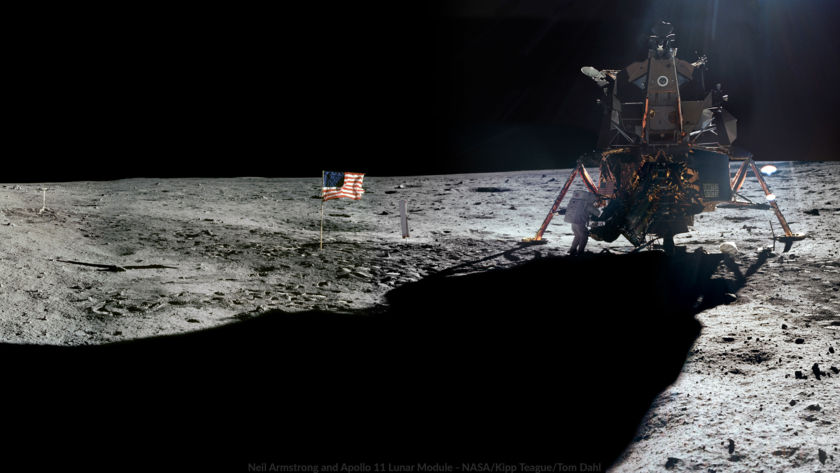 Wallpaper: Neil Armstrong at the Apollo 11 Lunar Module on the Surface of the Moon

Astronaut Neil Armstrong works at the Apollo 11 Lunar Module at Tranquility Base on the lunar surface. Click for different-size wallpaper download options.

More recently, human exploration has been closer to home. Float in low Earth orbit with the Space Shuttle Atlantis on the final Shuttle flight as it gased pon the Space Station with the Moon looming beyond: 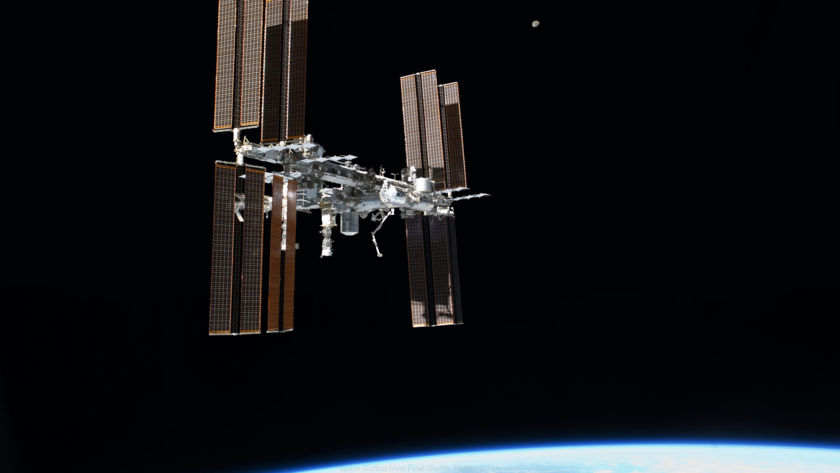 Or you could keep up-to-the-minute with human spaceflight technology development and pose in front of a Crew Dragon docking with the Station: 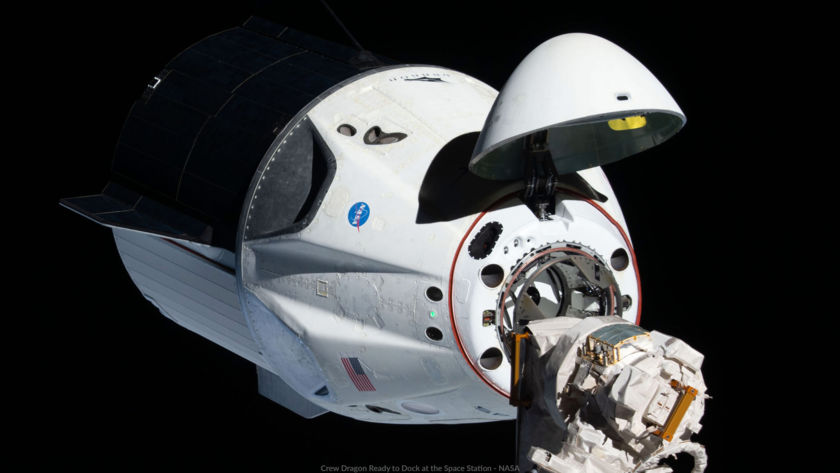 Wallpaper: Crew Dragon Ready to Dock at the Space Station

Let’s go farther into the outer solar system. If you are in a Mood, this Juno image of a swirling oval storm in Jupiter’s northern hemisphere might be a compatible background choice. 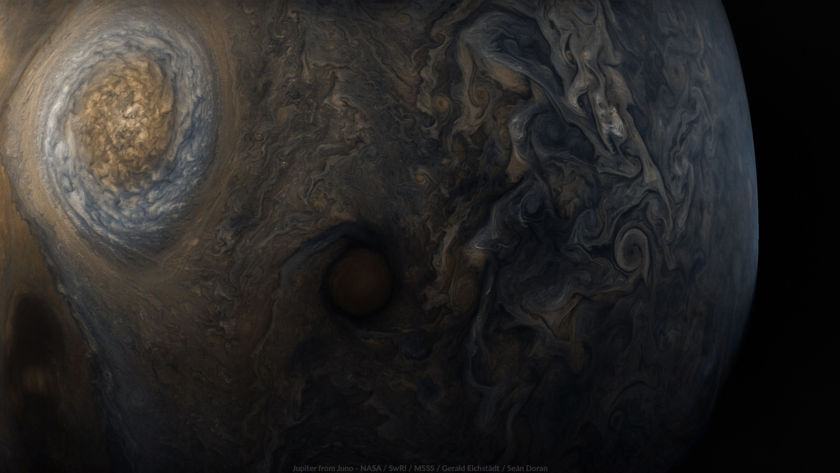 Juno captured this view of Jupiter during its seventh perijove flyby on July 11, 2017, from a distance of 11,445 km. The swirling oval storm looks similar to the Great Red Spot but is actually in the northern hemisphere. Click for different-size wallpaper download options.

You could position this iconic view of Saturn (taken from within its shadow by Cassini) behind you as though it were an angelic halo, or perhaps a broad-brimmed hat. 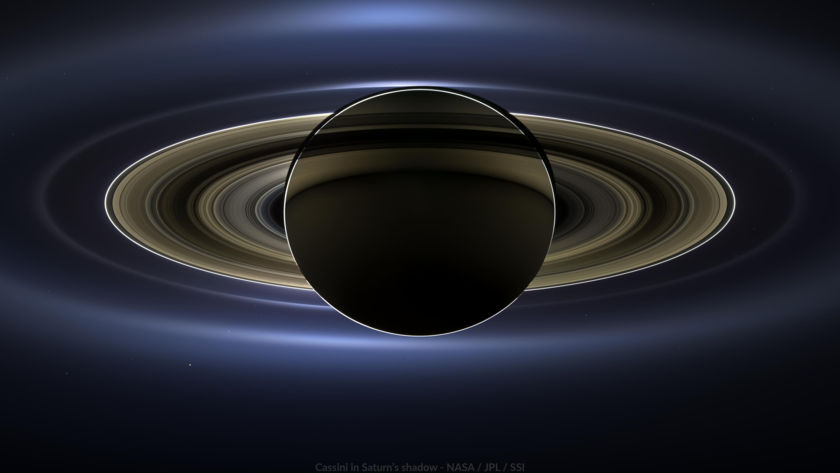 Wallpaper: In Saturn's Shadow (The Day the Earth Smiled)

On 19 July 2013 Cassini passed into Saturn's shadow and turned toward the Sun, capturing an image of the planet's night side and the weirdly lit semi-transparent rings. Cassini also captured seven of the moons and three planets. This was the third time our home planet was imaged from the outer solar system; the second time it was imaged by Cassini from Saturn's orbit; and the first time ever that inhabitants of Earth were made aware in advance that their photo would be taken from such a great distance.

You could leave the solar system entirely and broadcast from a nearby cluster of youthful stars, the Pleiades, as seen in infrared wavelengths by the WISE mission. 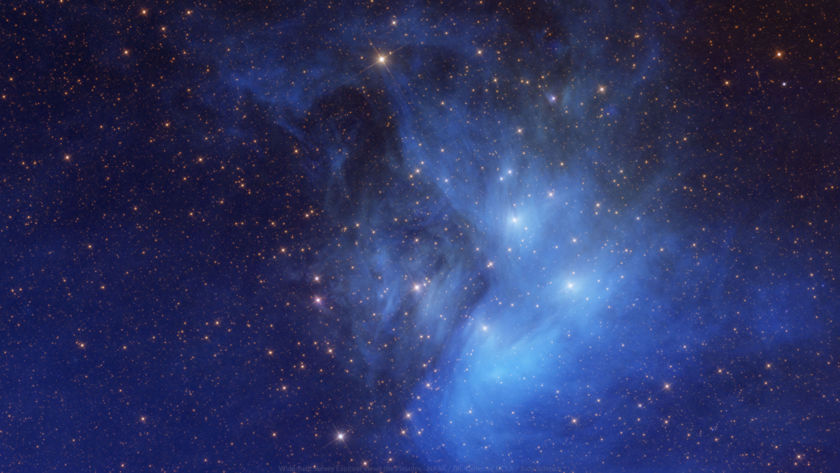 The Pleiades and their associated filaments and clumps of dust. To their south is a diffuse warm glow known as the zodiacal light. The WISE spacecraft took the images for this composite in infrared wavelengths.  Click for different-size wallpaper download options.

Let’s go deeper into space. It’s hard to know where to begin with Hubble images, but I liked this one because if you position yourself right, you can make it look like your head’s exploding with profound insight. (It’s actually M82, otherwise known as the cigar galaxy.) 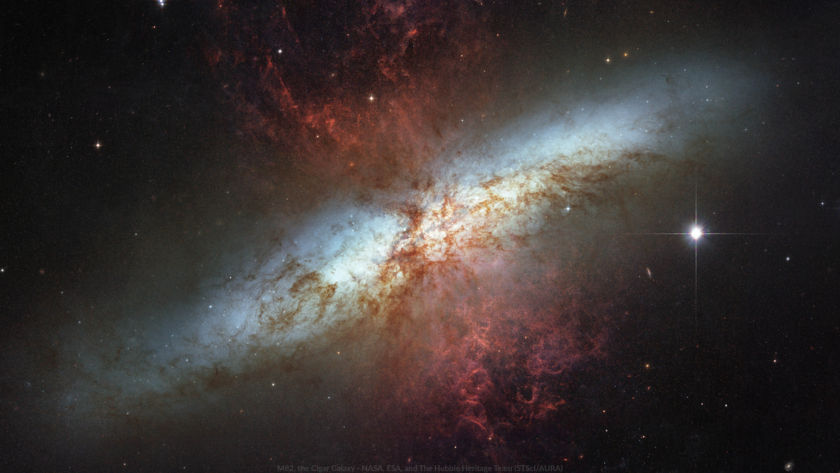 The Hubble Space Telescope captured this enormous mosaic of M82, located in Ursa Major, in 2006. The galaxy is remarkable for its bright blue disk, webs of shredded clouds, and fiery-looking plumes of glowing hydrogen blasting out of its central regions. Click for different-size wallpaper download options.

I hope these images provide some inspiring views or levity in your telecasts in the coming weeks! If you use any of the photos, The Planetary Society could be thanked with a shout-out to our website. Whether or not you can do that, I hope you enjoy them.

Thanks Emily, these are awesome!

Thank you, Emily. Do you know where I can find a wallpaper of a Martian sunset?

I really appreciate the images. Do you have the classic earth from the moon?

Awesome! Thanks for compiling these, Emily!

Great collection of wallpapers. I'm going to use the Neil Armstrong across my two desktop monitors. Thank you, Emily.

Emily, I didn't even know Zoom did this. Thanks for the lesson and thanks for the images, which I will employ to amaze and amuse my friends! -Ron

These are lovely, thank you. Have been meaning to update my martian wallpaper, I love having photos from another planet on my screen. The Cassini image is gorgeous as always, too. (OK I downloaded most of them. They are all stunning.) Judy (from NZ)