What is NASA's Budget?

NASA's budget is set by an annual process that begins with a proposal from the White House and ends with legislation passed by Congress and signed by the President. The budget specifies funding amounts for programs and projects in human spaceflight, space science, aeronautics, technology development, and education.

NASA's budget peaked during the Apollo program in the 1960s. After the United States won the race to the Moon, space exploration lost political support and NASA's budget was cut significantly. Since the 1970s, NASA has hovered between 1% and 0.5% of all U.S. government spending.

NASA is internally divided into major program areas, each of which receives funding to manage their specific types of projects. The exact breakdown varies from year-to-year, but generally about half of NASA's annual budget is spent on human spaceflight activities, thirty percent on robotic missions and scientific research, and the remainder split between aeronautics, technology development programs, salaries, facilities management, and other overhead.

How NASA's Budget Is Made

The White House provides a detailed budget proposal to Congress every February which kicks off an annual process known as "appropriations", which ultimately results in legislation passed by Congress and signed by the President that funds the federal government.

The proposal that begins this process is called the "President's Budget Request", which itself is the outcome of year-long negotiations, first within NASA and then between NASA and the White House's budget office. The President's Budget Request includes a justification and explanation for all of the space program's activities. It can also contain proposals to cancel projects or to begin new ones. The priorities reflected in the budget request reflect that of the President, and the document can just as easily be read as a political statement by the executive branch.

The President's Budget Request does not carry the force of law, though it does set the terms of the debate for the legislation that is subsequently written by Congress.

Once the White House sends its budget proposal to Congress, key congressional committees in the Senate and the House of Representatives craft legislation to fund NASA. Through this process, Congress decides whether to accept or reject proposals contained in the President's Budget Request and whether congressional funding levels for NASA's programs and initiatives will match, exceed, or fall short of the levels proposed by the President.

The legislation must be passed by Congress and signed by the President before the start of the fiscal year on 1 October. If not, NASA loses its authority to spend money and cannot honor contractual obligations, provide paychecks, or otherwise function.

The majority of spending by the United States government pays for social welfare programs and is not subject to annual congressional approval. This spending is referred to as "mandatory". Only about 30% of all U.S. government spending requires approval every year by Congress—a category of spending referred to as "discretionary". The Defense Department and related activities account for roughly half of all discretionary spending. All other government agencies and activities—including NASA—are funded from the remaining amount.

Where NASA's Budget Is Spent

NASA spends its money on Earth, not in space. NASA employs about 17,000 people and supports the employment of tens of thousands more through contracts and grants made in every state of the union. Last year NASA spent 73.5% of its total budget on contracts with nearly 5,000 businesses, nonprofit organizations, and educational institutions across the United States. NASA's major contractors—Boeing, Lockheed-Martin, SpaceX, and Orbital Sciences—are the biggest recipients of NASA funding, though they in turn work with many additional supplies and businesses.

The top 10 states receiving NASA contracts in 2018. See the full list in this Google Spreadsheet or download the data as a CSV file. Source: NASA Procurement Data View.

According to a report by The Tauri Group, NASA provides broad social and economic benefits to the United States. In particular, NASA: 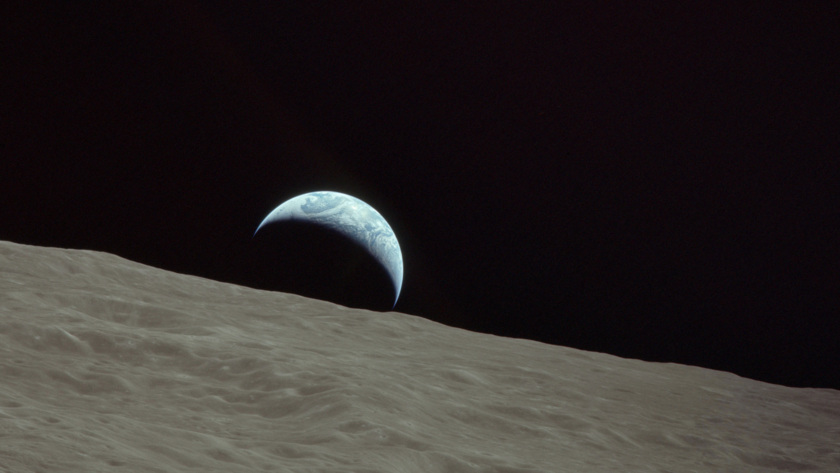 Human beings have not orbited the moon since 1972. This photograph of an Earthrise was captured by the crew of Apollo 17.

The value of NASA is more than economic and technological. Investments in the space program helped us learn where we came from. It revealed the very earliest era of the cosmos and demonstrated the rarity and fragility of Earth: the only planet known to have life in all of the universe. Investments in the space program proved that two hostile nations could compete in the peaceful arena of exploration, and then work together to create an International Space Station. NASA builds partnerships around the world based on a common desire to work peacefully together to explore the cosmos and extend the reach of humanity beyond our planet. And individuals around the world find themselves in awe of the wondrous scale and beauty of the cosmos.

For updates on the latest NASA budget news and other developments in space politics, be sure to sign up for our monthly newsletter, The Space Advocate.