The Discovery of a Planet, Part 1: The Blinking Image

February 18, 1930, was a cloudy day at the Lowell Observatory, on top of Mars Hill in Flagstaff, Arizona. 22 year old Clyde Tombaugh was hard at work, peering through the lens of an ancient-looking brass-colored device. The instrument, known as a “blink comparator,” mounted two large photographic plates. Each plate showed the image of precisely the same region of the night sky, but taken a few days apart. In the middle, between the two plates, was mounted a microscope, through which Tombaugh was peering intently. Three times every second the comparator clicked, and the image before Tombaugh would switch from a tiny sliver of one image to the same location on the other. Since the two plates were identical, Tombaugh saw no change. 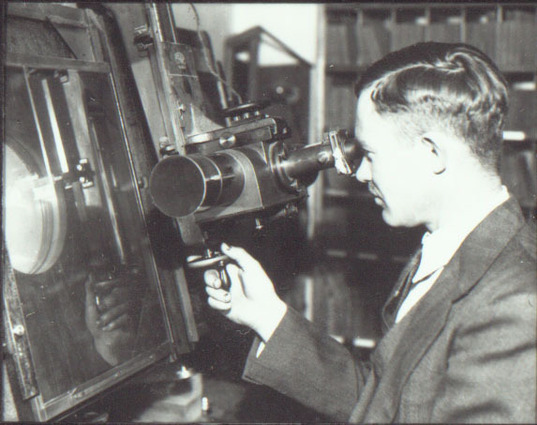 At work on the blink comparator at the Lowell Observatory, circa 1938

Since early that morning Tombaugh had been working his way slowly through two plates of the Delta Geminorum region, and throughout the long day the two plates, taken days apart, proved to be perfectly identical. Now, however, a point of light appeared and disappeared every time the comparator switched views between the plates. Tombaugh was immediately on the alert, and within seconds found what he was looking for: another blinking point of light, a few millimeters to the left of the first. Something seemed to be moving in the sky.

Disengaging the automatic blinking, Tombaugh carefully examined the plates. The flashing dot on the earlier plate, taken January 23, was to the right of the dot on the later plate, taken January 29. The object was moving from east to west. “Retrograde motion!” the thought raced through Tombaugh’s mind. Only an object inside the Solar System would move in this manner. He then carefully measured the distance the object had traveled over six days: only 3 millimeters. This meant that the object was very far away – well beyond the orbit of Neptune, the outermost known planet. Finally, to make sure, he brought out a plate taken on January 21 during a windstorm and placed it on the comparator. Because of the terrible seeing conditions under which it was taken, this plate was thought to be nearly worthless, but it was clear enough to confirm what Tombaugh already felt he knew. There was the object, exactly where it was supposed to be, 1.2 millimeters to the right of its position two days later. From all three plates it was clear that the object, whatever it was, was moving steadily through the outer reaches of the Solar System against the background of Delta Geminorum.

It was 45 minutes since Tombaugh had first noticed the blinking dot, and he now felt confident enough to share the news with his colleague, astronomer C.O. Lampland, across the hall. Leaving Lampland to study the plates, Tombaugh walked down to the office of the V. M. Slipher, Director of the Lowell Observatory. “Dr. Slipher,” he said, “I have found your Planet X.