Pluto: The Discovery of a Planet

Read here how Clyde Tombaugh, a farm boy from Kansas with a high school education, succeeded where accomplished professional astronomers had failed, and discovered the elusive 9th planet. Learn about how the closed cosmos of the ancients became the open universe of modern times, opening the door to new discoveries in the heavens. Find out about William Herschell's discovery of Uranus, and how the detection of Neptune turned into nationalist feud between England and France. Meet Percival Lowell, the eccentric American visionary who believed in intelligent life on Mars and launched the search for "Planet X." 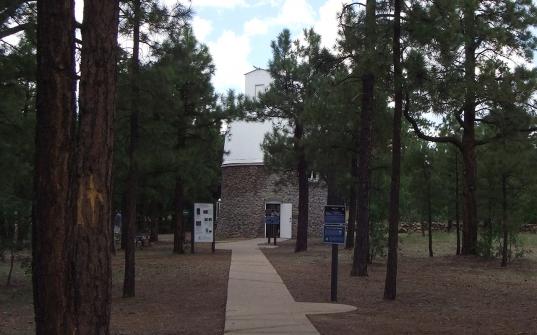 Nestled among the trees at the Lowell Observatory is the small observation dome that houses the 13-inch Lawrence Abbott telescope, known today as the "Pluto Discovery Telescope." Working from this dome, Clyde Tombaugh discovered Pluto in the winter of 1930.

All this and more on our 75th anniversary special:

PLUTO: DISCOVERY OF A PLANET

Part 2: Out of the Six-Planet World

Part 6: From Pluto to Sedna