It wasn't the arguments that changed, it was the politics.

In 2005, Congress passed a bill requiring NASA to find and track at least 90% of all near-Earth objects (NEOs) 140 meters or larger by 2020. It was a significant step toward protecting the planet from potential asteroid impacts, but it had a major flaw: Congress neglected to specify funding for the new mandate. As a consequence, NASA's NEO survey effort was sidelined for years; as of January 2019, only 40% of the total estimated population of hazardous asteroids 140 meters and larger had been found. Meeting the 2020 mandate is now impossible.

For five years after the 2005 law, NEO survey efforts at NASA limped along with an annual budget of less than $4 million per year—roughly 0.02% of the space agency's total expenditures and less than the travel budget for employees at NASA headquarters. This money supported observation time on ground-based telescopes around the world—an important but ultimately inadequate method for detecting the extremely faint signatures of near-Earth objects.

This began to change in 2010. That's when the White House, for the first time, proposed a 5-fold funding increase for NEO observations, kicking off a decade-long trend that transformed the effort from a limited, ground-based sky survey into a full-fledged planetary defense program with its own flight line for space missions. This year, NASA will spend $150 million on planetary defense, 40 times more than in 2009. This growth happened only in the past few years: in 2018 and 2019 NASA will spend as much on planetary defense as it did in the entire previous decade combined.

The arguments in favor of an extensive NEO survey program are not any different today than they were in 2005. Everyone knew that getting hit by a big asteroid would be bad and that we needed to search for potential threats; that's why Congress passed the law it did. In the absence of new arguments, we should look to politics: why would the NEO observations suddenly warrant increased political attention required to drive funding?

A key report from the National Research Council (NRC), released in early 2010, helped establish the scientific and policy foundations for increased NEO funding. It included examples of how increased budgets would enable improved detection and mitigation efforts.

However, in repeated congressional budget proposals, NASA reached beyond the NRC report to its human spaceflight program to justify funding increases for NEO observations. I believe it is no accident that 2 significant jumps in funding—from $3.8 million to $20 million as proposed in fiscal year 2011, and from $20 million to $40 million in fiscal year 2014—both align with major changes in the human spaceflight program that involved near-Earth asteroids.

In 2009, the Obama Administration convened the Review of United States Human Space Flight Plans Committee to evaluate NASA's human spaceflight efforts, including Constellation, the over-budget and behind-schedule effort to return humans to the Moon. The report, released later that year, declared the current program "unsustainable" and proposed a "flexible path" for human exploration, including a visit to a near-Earth asteroid as an interim destination.

The congressional budget justification for fiscal year 2011, released months after this report, canceled the lunar program and stated that NASA would lay "ground work that will enable humans to safely reach multiple potential destinations, including the Moon, asteroids, Lagrange points, and Mars and its environs." This same budget request also proposed a significant budget increase in NEO observations. In addition to referencing the recent NRC report, the budget request leveraged the new direction for human spaceflight to justify this decision, saying that NASA "will significantly expand [its] efforts to find and characterize asteroids and comets approaching Earth which may be destinations and resources for our exploration of the solar system." Later that year, the Obama Administration released its national space policy, which directed NASA to send humans to an asteroid by 2025.

NASA further revised these plans by proposing the Asteroid Redirect Mission (ARM) in its fiscal year 2014 budget request. As initially conceived, ARM would have moved, via robotic spacecraft, a small asteroid to lunar orbit to be explored by astronauts. To succeed, NASA needed to find a suitable near-Earth asteroid, a problem potentially solved by further expanding NEO searches. NASA proposed to double funding for NEO observation and once again explicitly referenced human spaceflight goals as part of its justification, saying that "information gathered in this effort will support the proposed mission to retrieve an asteroid.

Planetary Defense/NEO Observation Funding Table. Notes: All values in millions of dollars. Values in italics are proposed and not final. FY 2020 "Actual" is the proposed appropriation from the House of Representatives and not yet finalized. Numbers in FYs 2021 - 2024 are tentative and projected by the FY 2020 NASA budget request. They do not yet reflect funding necessary to pursue the NEO Surveillance Mission. Sources: NASA budget requests FY 2010 - 2020, FY 2019 Consolidated Appropriations Act Committee Report, FY 2020 HAC-CJS Committee Report.

You might wonder: did the Chelyabinsk impact play a role in the fiscal year 2014 funding increase? That's unlikely, because the impact occurred in February 2013, after the White House budget request increasing NEO observations to $40 million had already been finalized. The event certainly didn't hurt the effort to grow the program's budget, but it's unlikely that it was directly responsible for the increase in funding.

More recently, NEO-related missions became relevant to parochial interests in Congress. The Double Asteroid Redirection Test (DART) mission concept began receiving funding via congressional appropriations in fiscal years 2017 and 2018—before NASA formally proposed the mission in fiscal year 2019. Though DART is an important and relevant test of asteroid deflection, the sudden congressional interest likely stemmed from the fact that it is managed by the Johns Hopkins Applied Physics Laboratory (APL) in Maryland. APL was wrapping up development of the Parker Solar Probe in 2017 and had no other planetary missions in the pipeline (APL contributes to the Europa Clipper but does not manage the program). DART solved that problem.

The addition of a full-fledged flight project to an already growing NEO observations program effectively tripled the program's budget. It now can pay for more ground-based NEO surveys, support radar observations of near-Earth asteroids, and take over spacecraft operations such as NEOWISE. The rates of detection after 2010, shown below, demonstrate the benefits of this investment. 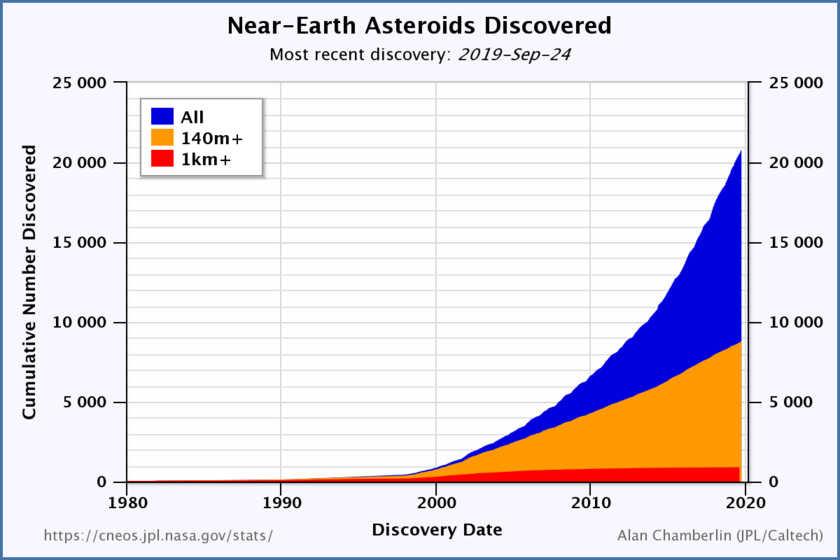 Given these growing responsibilities, NASA rechristened the NEO observations program as "Planetary Defense" in fiscal year 2018, promoting it from a subprogram within the Planetary Science Research and Analysis account to a major program line within the Planetary Science Division. It now rubs budgetary shoulders with the Mars Exploration, Discovery, and New Frontiers programs.