Cosmos with Cosmos Episode 7: The Backbone of Night

In which we return to cosmos

Cosmos with Cosmos was a weekly series that encouraged Society members to re-watch Cosmos with a shared group, a cosmo(politan), or other drink of their choice. The Planetary Society published weekly episode discussion pieces to complement the original series before the Neil deGrasse Tyson-led 2nd season in 2014. You can currently watch the original Cosmos streaming on twitch.

Watch Cosmos Episode 7: The Backbone of Night on Hulu or iTunes.

Episode 7 of Cosmos, The Backbone of Night, opens not with stars but with the Verrazano–Narrows Bridge connecting Staten Island to Brooklyn. As in previous episodes we're moving towards something, towards home. But instead of coming in from deep space towards Earth, we're following Sagan back to his home – his origins – in Brooklyn.

The episode is also concerned with another origin, which is one of the core themes of the entire series: that the universe is knowable, that it follows laws we are just beginning to understand, and that this pursuit of knowledge drives us to better understand ourselves and our species.

After a string of episodes that were mainly exhibition, I found it refreshing to return to the core thesis of the show, about how the chaos became cosmos. Unlike some previous episodes, there is little filler, the transitions between topics are smooth, and the segments are full of thoughtful speculation, discussion, and intriguing ideas. This is the best episode in the series so far.

The show has subtitled itself "A Personal Voyage," but rarely have we seen so much of Sagan's biography wrapped up in the narrative. This important conceit – that our narrator is human – helps connect us as viewers, allowing us to map ourselves onto Sagan's story that is, in parts, our own. We can each recall a moment when we were young when the world grew in size, when the world showed itself to be far grander than our limited experience. Developing a shared experience is crucial: it allows us a foothold in the greater thematic parallel in this episode, that we ourselves have experienced a similar growth in understanding of the world as a species.

The parallel narrative between Sagan's childhood and humanity's understanding of the cosmos is subtle and finely crafted. Consider: Sagan's world when he was young was small – just a few blocks in the Bensonhurst section of Brooklyn. He could see stars at night. These piqued his curiosity, driving him beyond the confines of his small universe and into a new neighborhood containing a library. Our ancient human ancestors also thought that their world was small, that it was unique, that all the gods and movements of the stars in the sky were focused on them. But the stars called out to us, pulling us beyond our known world towards greater knowledge, finding ourselves within "something much grander" than we ever would have guessed.

We are given a tantalizing tour of this pivotal moment in human history with a thrilling tour of ancient greek scientists and assorted achievements. The ancient greeks created the foundations of modern science, drama, linguistics, rhetoric, and politics. Their speculations (particularly the wrong ones) would deeply influence the western world for the next 2500 years. Not bad for a loose collection of city-states over the course of a few centuries.

Sagan argues that this "glorious awakening" grew from a practical response to problems faced by semi-isolated merchant-cities. A heady mix of ideas, beliefs, and treasure simmered in a region far away from established, oppressive powers. Sagan expands on this idea in the book version of Cosmos, saying that given enough time, science would likely emerge in many civilizations, but it had to happen first somewhere.

You can hear the excitement in Sagan's voice as he spells out possibly the most important idea in human history:

"It was argued that the universe was knowable. Why? Because it was ordered, because there are regularities in nature that permitted secrets to be uncovered. Nature was not entirely unpredictable, there were rules that even she had to obey. This ordered and admirable character to the universe was called cosmos."

This is what its all about. That's the key to every benefit of the modern world. The universe is knowable. Without any predictability, we would live in a terrifying chaos, utterly subject to forces beyond our understanding, we could only make desperate attempts to placate them.

But if there are universal laws that even nature obeys, there's no reason to adhere to prescriptive rules set out by priests to appease gods, because the gods aren't the ones running the show. This lifts a heavy burden: disasters, plagues, and other blights are no longer the result of our own actions. We are freed from placating capricious beings who may, at any time, upset and alter the behavior of the world. How liberating this is. How powerful.

But to many people this is can be more frightening than the gods themselves. If nature is a physical consequence of basic laws governing behavior of matter and energy, then humans are sidelined. There's no placating nature; she is merciless. Some would rather chose a chaos that they may have the ability to persuade than a cosmos in which they are mere bystanders.

Of course, this first era of proto-science was temporary. Many ideas were suppressed and lost. What we know about them come through second-hand accounts or tattered scraps of parchment. Out of the same fertile ground grew the idea of the division between the natural world and thought. Plato and Aristotle's ideas of a sullied natural world, separate from the distant perfection of the heavens, dominated western thinking for thousands of years. Not until Kepler did observation once again meet theory. 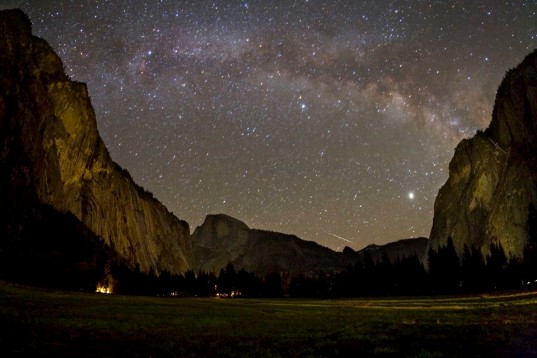 The Backbone of Night

The Milky Way – the backbone of night – over Yosemite Valley. These stars have called to humans since the dawn of our species, bringing the best and worst of us. Right now, our better tendencies are winning out.

Sagan argues that the sin of slavery ultimately was responsible for the suppression of these bold new ideas. I think there's a compelling case there. But I also feel that it was a consequence of human tendencies towards narcissism, self-importance, power, and oppression. It's much more satisfying to be the most important person in the room. We naturally seek attention and affirmation. How nice is it if every motion in the heavens happens to influence us? A small universe makes us feel bigger in comparison.

I suppose this is where the parallels between the individual's development from child to adult and the society's development from chaos to cosmos break down. Usually, our personal development is relatively constant and forward-looking. We tend not to forget that we learned about the true nature of the stars, for example. But our culture has moved forward in fits and starts, sometimes forward, often backwards. There's no guarantee that advances made today will stand tomorrow. The stars may beckon to a grander universe, but they won't necessarily keep us there.

Later in the series, Sagan underscores the importance of being a "citizen of the cosmos." This doesn't just mean being worldly or well-read. I think that to be a citizen of the cosmos is to be committed to cosmos – to the idea that order underlies nature, that our universe should be grander, and that we should feel smaller within it. It demands that we stand against chaos, against our inner demons of narcissism, insecurity, and perceived self-importance that stand ever ready to devour hard-won gains in knowledge.

Not much to add to either Sagan or this. But the comment on citizens of cosmos, of being "cosmospolitan" as well as cosmopolitan, was a nice touch I hadn't thought of. Heartily agree! A stray observation of my own: mathematicians are still, statistically significant IIIRC, devoted to platonist dualism. I.e. seeing mathematical "objects" having an existence independent of the mathematics (with heuristic methods, I add) invented to describe them. That is a disquieting, sobering observation.

@Torbjörn: That's interesting. Do you think that is an echo of Pythagoras influencing mathematicians over all of these years, or is it more of a consequence of how they must approach objective reality given the tools at hand?

Fantastic! I also liked this quote from Dr. Grinspoon this week. "Activism makes scientists uncomfortable for good reasons. It doesn’t mesh easily with honest skepticism. And yet, if you discover a house on fire you don’t just measure the infrared emissions and write a paper about it. It’s not up to us to save the world, but we have to play our part. There is a saying about education: “Don’t teach a child what to think, teach them how to think.” To some degree, more than specific policy debates, that is our task.." TITLE: (Sagan Lecture) Terra Sapiens: The Role of Science in Fostering a Wisely Managed Earth. http://funkyscience.net/