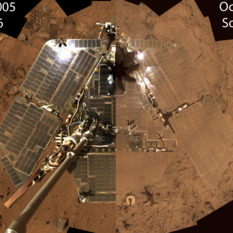 Dust from the sky has settled on both the rover deck and the surrounding landscape. The dust-covered solar cells will not be able to generate as much power as when they were clean. Unless a puff of wind dusts off the solar panels, Spirit may have difficulty surviving the approaching Martian winter. 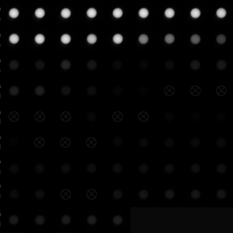 I just received another batch of "tau" images from rover camera lead Jim Bell to add to my visualizations of the rovers' dark skies. These pictures provide a direct measurement of the opacity of the atmosphere between the rovers and the Sun. 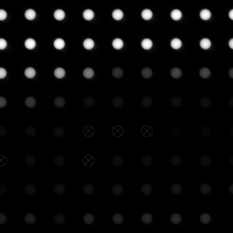 I haven't written an update on the dust storm at Mars recently for two reasons. For one, the rovers are out of immediate danger, so it wasn't as urgent. The other reason is that Jim Bell wanted Cornell to issue a press release with updated versions of the images and animations I've been putting together from the rovers' "tau" images.

A little good news on the rovers

The skies aren't quite as dark as they have been, for both Spirit and Opportunity. In fact, Spirit has enough power now to be doing a little work with its robotic arm.

High tau for Spirit and Opportunity

Over the weekend I fiddled with the "tau" images that Mars Exploration Rover Pancam lead Jim Bell gave me, and I produced a couple of different ways to visualize the darkness of the rovers' skies.

The dust storm continues at Mars, but both rovers continue to be power-positive.

Mars Exploration Rovers update: Spirit and Opportunity are both still talking to Earth

Both Spirit and Opportunity are still suffering under incredibly dark skies, but, amazingly, they are both "power-positive," meaning that they are managing to produce enough power from the limited amount of sunlight to keep the batteries fully charged.

Spirit gets brushed off

There was great news last night from Mars Exploration Rover mission operations: Spirit seems to have enjoyed another "cleaning event." 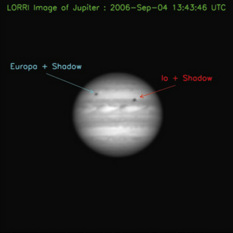