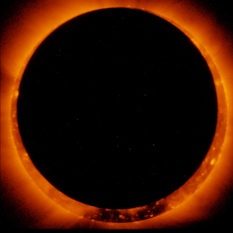 Two spacecraft that keep their ever-watchful eyes on the Sun -- NASA's Solar Dynamics Observatory (SDO) and JAXA's Hinode -- were doing their thing, when something large wandered past: the Moon.