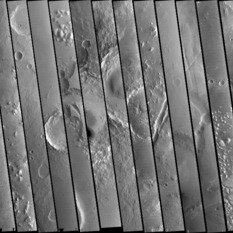 A new angle on Mars for Mars Odyssey

Mars Odyssey has been in space for 15 years. It flies in a special "sun-synchronous" orbit, crossing the equator at roughly the same local time every day. Over time, the Odyssey mission has changed what that local time of day is, and I just realized something cool about how those changes show up in the geometry of its images.

What's going on with our robotic planetary missions? In February I count more than 20 planetary spacecraft exploring six targets beyond Earth or cruising to new destinations.