The missions that sent 12 humans to the lunar surface

Apollo was the NASA program that sent the first humans to the Moon. From 1969 to 1972, a total of 6 spacecraft carrying 12 astronauts landed on the lunar surface. It was the only time humans have ever walked on another celestial body, and none have left Earth orbit since.

On 25 May 1961, just 20 days after Alan Shepard became the first American to fly into space, President John F. Kennedy addressed a joint session of Congress to ask for funding to start the ambitious program: "I believe that this nation should commit itself, to achieving the goal, before this decade is out, of landing a man on the Moon and returning him safely to the Earth," Kennedy said. NASA met the goal on 20 July 1969, when Neil Armstrong stepped onto the surface during Apollo 11.

The program culminated in 1972 with Apollo 17. The entire lunar effort cost roughly $288 billion in 2019 dollars, and employed 400,000 Americans at its peak. In total, Apollo astronauts returned 382 kilograms of lunar rocks, core samples, and regolith from the lunar surface. The samples showed the Moon is a lifeless world that formed roughly 4.5 billion years ago, experienced catastrophic change 3.8 billion years ago, and has been relatively (though not completely) inactive since. Its rocks are chemically related to Earth, supporting the theory that the Moon was created when another large world impacted early Earth. 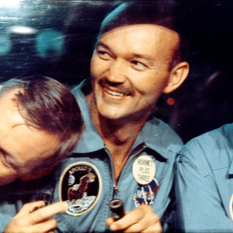 The Planetary Society is celebrating the 50th anniversary of the Apollo program with personal remembrances, new analyses, and other exclusive content.

18 May 1969
Dress rehearsal for the Moon landing

14 November 1969
A pinpoint landing in the Ocean of Storms 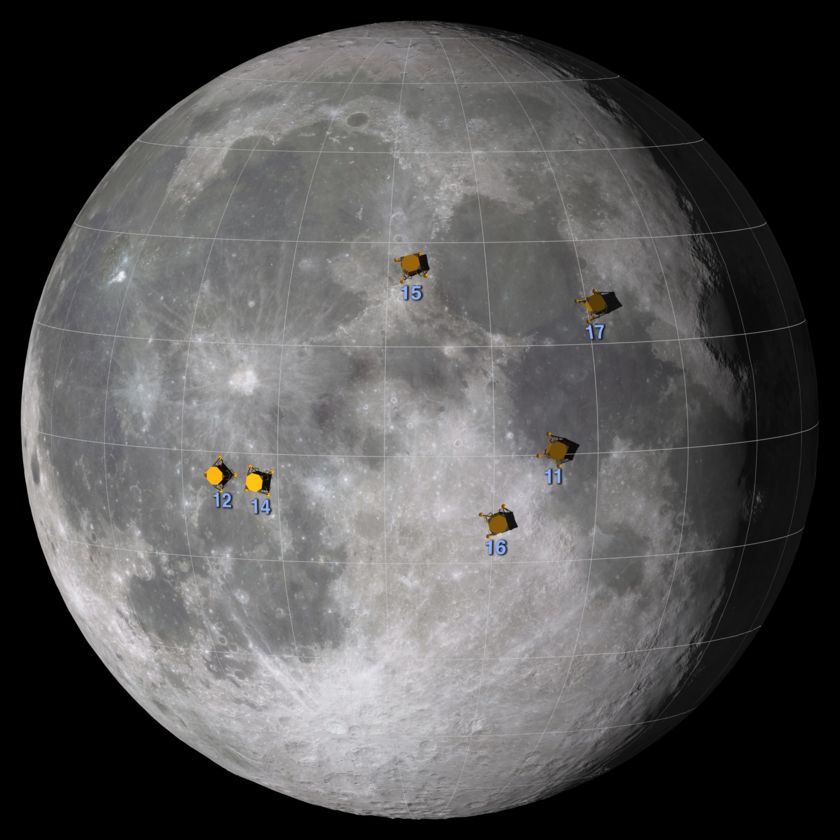 A map of all 6 Apollo landing sites.

Each Apollo mission to the Moon launched aboard the Saturn V, the most powerful rocket to ever successfully fly. Standing 111 meters tall and generating 34.5 million newtons of thrust at liftoff, the rocket could haul payloads of roughly 130 metric tons to low-Earth orbit. 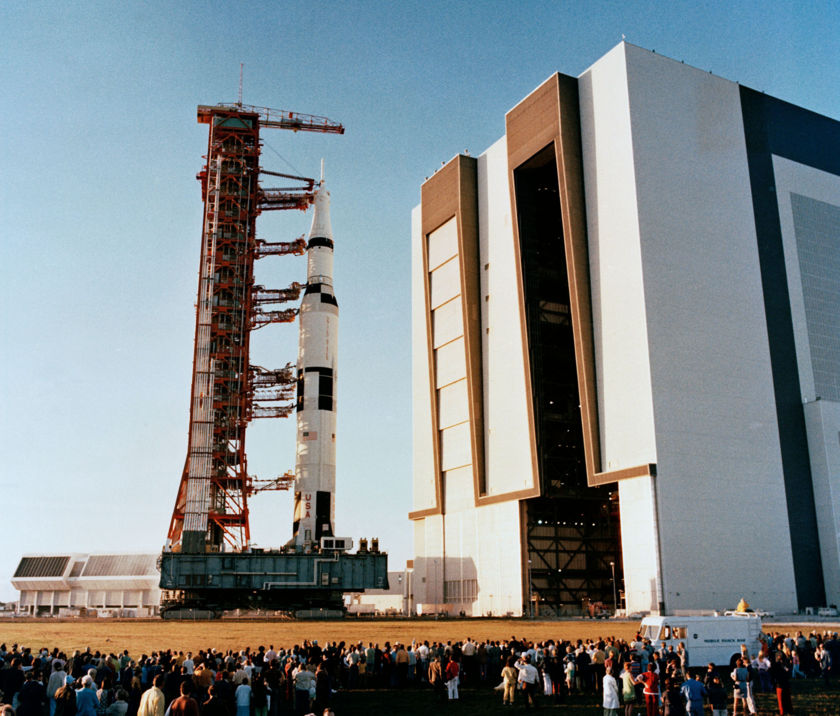 Packed inside the top of each Saturn V were two independent spacecraft, which consisted of two modules each. The Command and Service Module (CSM) included the pressurized, gumdrop-shaped command module that carried 3 astronauts on each mission. Attached beneath the command module was an unpressurized service module that provided propulsion and storage for oxygen, water, and electrical power. 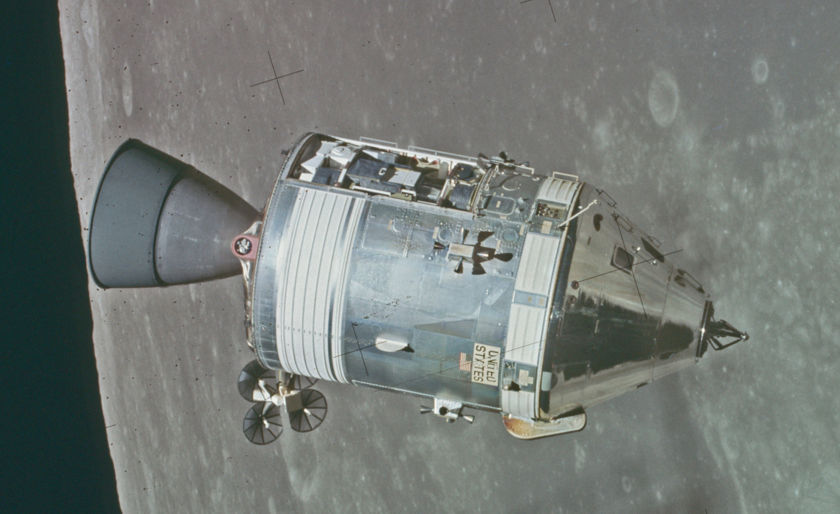 The Apollo Command and Service Module consisted of the grumdrop-shaped, pressurized command module (right) that held the astronauts, and the service module (left) that carried propulsion, oxygen, water, and electrical power. Seen here is the Apollo 15 CSM Endeavour in lunar orbit, photographed from the Lunar Module.

The Lunar Module (LM) included a pressurized ascent module and an unpressurized descent module. Two astronauts flew the lunar module from lunar orbit to the surface each mission as a combined spacecraft, and blasted off using only the ascent module. 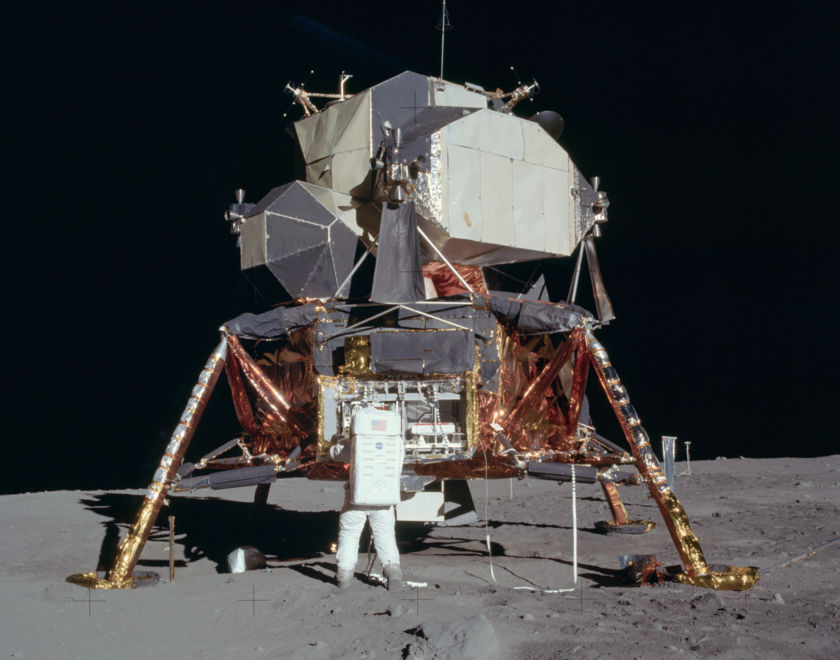 Once en route to the Moon, the 3 astronauts inside the Command and Service Module detached from the Saturn V upper stage, turned their spacecraft around, docked with the lunar module, and pulled the combined vehicles away from the spent rocket.

At the Moon, the service module fired its engine to slow the vehicles down and enter orbit. To begin the landing sequence, 2 astronauts entered the Lunar Module, while 1 remained behind in the Command and Service Module. The Lunar Module then used its descent engine to land.

Test flights and other missions

As NASA conducted the Mercury and Gemini programs from 1961 to 1966 to gain experience with human spaceflight, it began in parallel to develop the Saturn rocket series that would take humans to the Moon. From 1961 to 1965, the agency flew 10 uncrewed launches of the Saturn I, with the final 3 missions including the Pegasus satellites that tracked the frequency of high-altitude micrometeorite impacts.

In 1966, NASA debuted the Saturn IB, which featured the upper stage that would be use to blast astronauts to the Moon. The Saturn IB flew 3 uncrewed missions in 1966, two of which carried production versions of the Block I Apollo Command and Service Module. 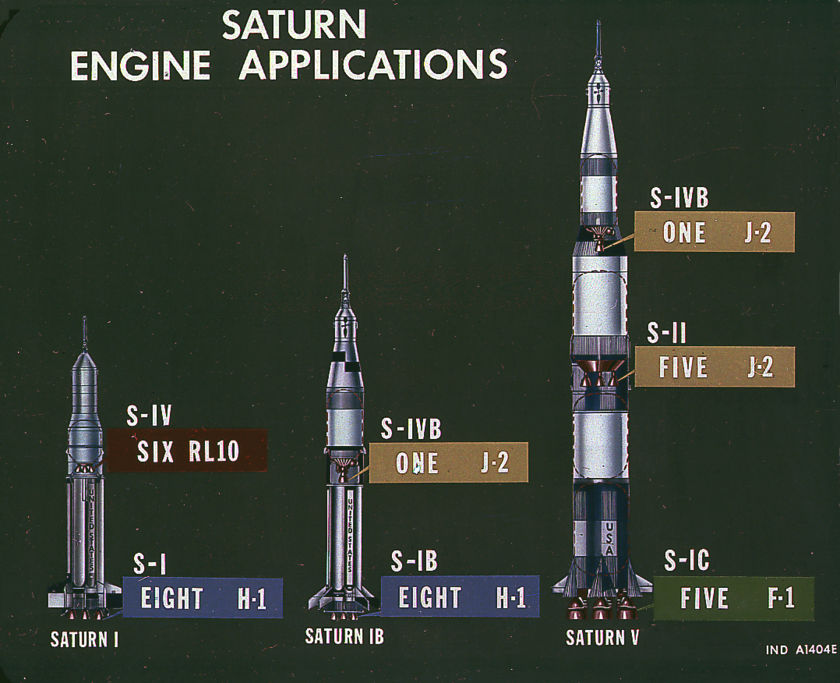 This diagram shows the evolution of the Saturn rocket series and the commonality of engines used between the vehicles.

Apollo 1 was scheduled to launch on 21 February 1967 aboard a Saturn IB rocket. It would have sent Gus Grissom, Ed White, and Roger Chaffee on the first crewed flight test of the Block I Apollo Command and Service module in low Earth orbit. NASA initially designated the mission AS-204, but both contractors and the crew informally called  the mission Apollo 1 to signify its importance.

Less than a month before launch on 27 January 1967, a fire inside the command module during an on-pad launch rehearsal test killed Grissom, White, and Chaffe. Major causes of the accident included a high-pressure pure oxygen environment, excessive flammable materials in the capsule, and a hatch that could not be opened quickly during an emergency on the launch pad.

NASA decided not to fly the Block I capsule with a crew. For the Block II capsule, flammable materials were removed from the cabin, the hatch was redesigned, and a lower-pressure oxygen-nitrogen air blend was used when the spacecraft was at sea level. 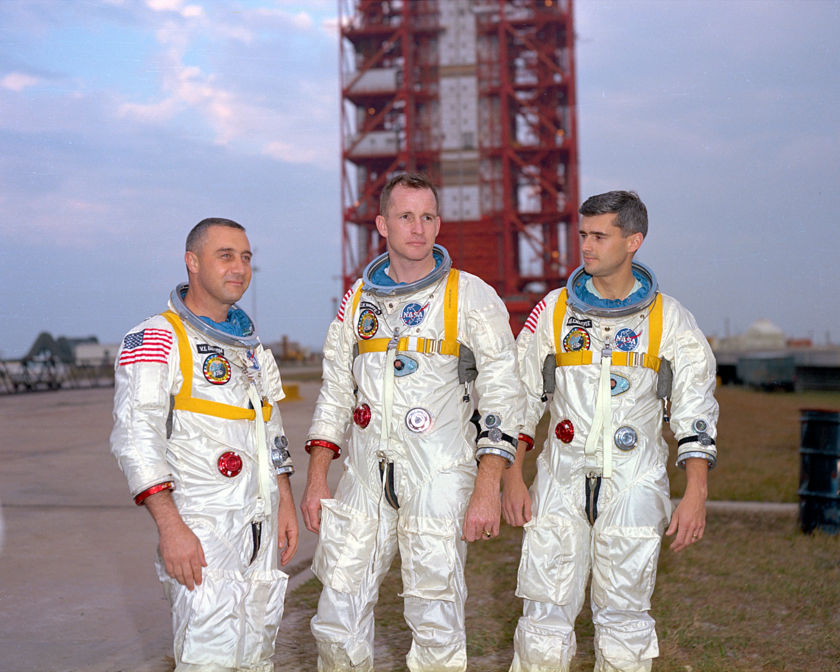 The crew of Apollo 1. From left to right: Gus Grissom, Ed White, Roger Chaffe. All 3 astronauts were killed by a fire during a launch rehearsal on 27 January 1967.

NASA honored Grissom, White, and Chaffee by formally naming their mission Apollo 1. Because the Block I Command and Service Module had already flown on 2 uncrewed test flights, AS-201 and AS-202, NASA left placeholders for those two missions in its new Apollo numbering scheme. Officially, there was no Apollo 2 or 3 mission.

Post-accident flight tests resumed 9 months later on 9 November 1967 with the launch of Apollo 4, the first complete flight of the Saturn V. The rocket launched a Block 1 Command and Service module and tested the Saturn V upper stage restart sequence that would be needed to blast astronauts to the Moon. The test sent the command module into a high-altitude arc that resulted in an atmospheric reentry with a speed and angle similar to that of returning from the Moon, which tested the spacecraft's heat shield. 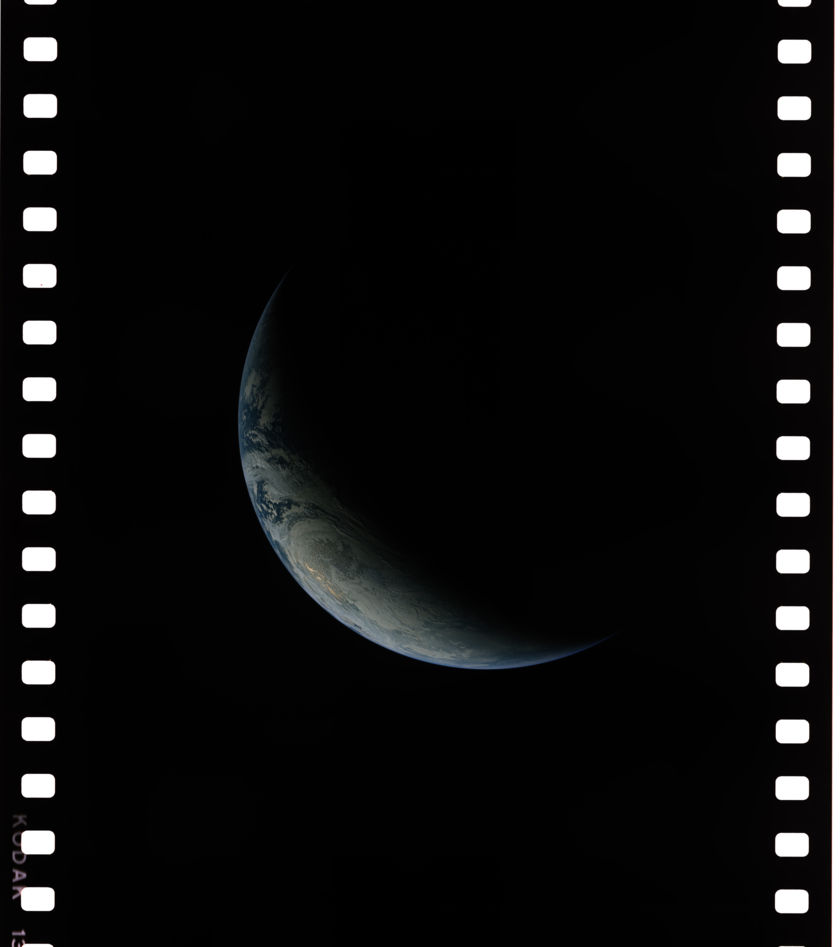 The Earth, from a height of about 18,000 kilometers, on November 9, 1967. The image was taken using an automatic camera mounted in the Apollo Command Module.

Apollo 5 was the first uncrewed flight test of the Lunar Module. Launched 22 January 1968 aboard a Saturn IB, engineers tested the Lunar Module's descent and ascent engines and conducted a "fire in the hole" lunar landing abort where the ascent engine fired while still connected to the descent stage.

Apollo 6 was similar to Apollo 4 but included a Lunar Module, offering a chance to see how the Saturn V flew with a full payload. Launched on 4 April 1968, the mission would have seen the Saturn V upper stage perform a trans-lunar injection. Then, the command module would have attempted a direct abort, using its engine to reverse course and return to Earth 10 hours after launch.

Severe oscillations from the Saturn V's powerful engines during launch damaged the adapter connecting the Lunar Module to the Command and Service Module. Two second-stage engines failed, and the spacecraft stack was placed into the wrong orbit. The upper stage then failed to restart for trans-lunar injection.

NASA was still able to use the service module engine to blast the command module into a high-altitude arc, providing a high-speed reentry test. Engineers were able to correct the Saturn V launch oscillations, and NASA proceeded with Apollo 7, the first crewed flight in October 1968.

The United States spent $25.8 billion on Project Apollo between 1960 and 1973, or approximately $264 billion when adjusted for inflation to 2019 dollars. This number grows to $28 billion ($288 billion adjusted) when Project Gemini and NASA's robotic lunar missions are included. For further details, see the "How Much Did the Apollo Program Cost?" page.

"As we leave the Moon [...] we leave as we came and, God willing, as we shall return, with peace and hope for all mankind."