“This asteroid is a wakeup call for the importance of defending the Earth from future asteroid impacts. Big impacts don’t happen often, but they will happen.”
- Bill Nye, Chief Executive Officer of The Planetary Society.

On Friday, February 15, 2013, Asteroid 2012 DA14 travelled just 17,000 miles above the Earth - closer to our planet than the orbit of the communications satellite that broadcast the Super Bowl around the world. About half the size of a football field and with more than 100 times the energy impact of the nuclear bomb that fell on Hiroshima, DA14 missed the Earth this time around, but if it had impacted, this asteroid could have taken out any major metropolitan city on our planet.

The discovery of Asteroid DA14 was made by a small team of observers at La Sagra Observatory in Southern Spain, on February 22, 2012, enabled with a grant provided by The Planetary Society. One of the observatory's telescopes had recently been upgraded with funds donated by The Planetary Society's NEO Shoemaker Grant program. Its new camera enabled detection of fast moving objects like 2012 DA14 – requiring very fast imaging for discovery and determination of their paths. The upgraded instrument has far outperformed the Observatory's other telescopes.

Now, we were able to point the world's telescopes at this 2013 close flyby and learn more about this asteroid and its orbit because of the support of our Planetary Society Members all over the world.

This asteroid won't hit Earth, at least for many, many decades.  But it is a reminder we live in a cosmic shooting gallery.  We need to find, track, and characterize these objects and develop the technical and political capability to deflect an asteroid.  It is not a matter of whether there will be a dangerous impact, it is a matter of when.

The Planetary Society and its members are working to do our part through programs like our Shoemaker NEO Grants, like the one that made the discovery of 2012 DA14 possible, and projects like Laser Bees, exploring new ways to potentially deflect a dangerous asteroid.

More on the Discovery of Asteroid 2012DA14

Vermin of the Sky 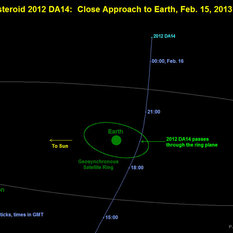 Frequently Asked Questions for Asteroid 2012 DA14 and Its Close Approach

Frequently Asked Questions fact sheet about asteroid 2012 DA14 that will fly closer to Earth than geostationary satellites on Feb. 15, 2013, and was discovered because of a Planetary Society Shoemaker NEO grant to La Sagra Observatory.

Watch the recording of our popular webcast about these two historic events, featuring Bill Nye and Bruce Betts. 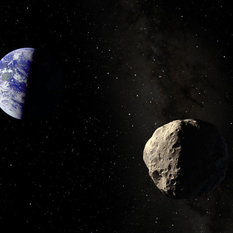 Planetary Society Director of Projects Bruce Betts reassures us in this brief and fascinating video explanation of what will happen--and what won't happen--when this big asteroid comes closer to Earth than many satellites.

How do you memorialize a man who really was a legend in his own time? A traditional obituary, recounting a life and deeds in solemn prose, does not seem to us at the Planetary Society as a fitting way to remember Gene Shoemaker.

What We Know About the Russian Meteor Event [UPDATED]

Preliminary estimates show that the meteoroid was 15 meters wide and weighed roughly 8000 tons. The resulting airburst would have the equivalent yield of about a 1/2 megaton explosion.