NASA's Journey to Mars Report: A Plan to Form a Strategy for a Concept

NASA released a much-anticipated strategy document Thursday outlining the agency's next steps for getting humans to Mars. We've had hints for some time that this was coming, through comments by conference speakers, media reports and a leaked internal presentation. But we didn't know exactly what the report was going to say—or be—until last week. If you were expecting this report to lay out, in deep detail, how NASA plans to land humans on Mars in the 2030s, prepare to be disappointed; the report is big on overall concepts but light on specifics. Most of this is stuff we already know. 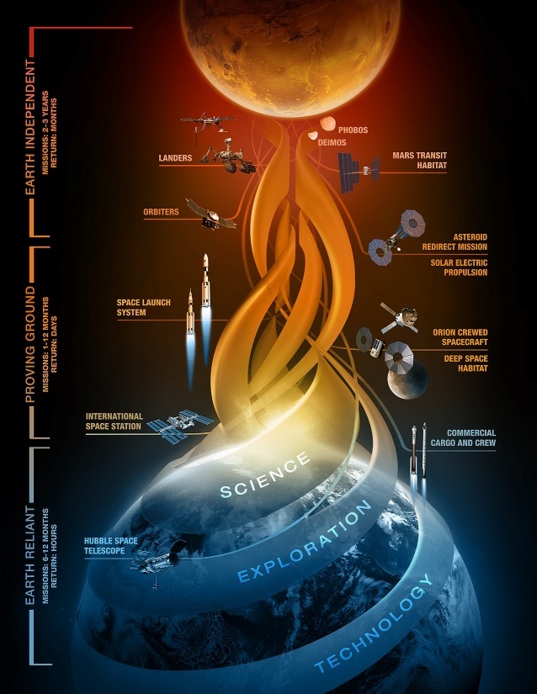 The report is titled "NASA's Journey to Mars, Pioneering Next Steps in Space Exploration." At 36 pages, it's pretty slim; I followed up with NASA Public Affairs to make sure what was released yesterday was actually the final document, and was assured that we're looking at the genuine article.

Last month, NASASpaceflight.com published an internal NASA presentation on their paid, members-only L2 subscription site. The presentation describes how various proposed humans-to-Mars vehicles and components might integrate with SLS. It also alludes to the Journey to Mars document that was released yesterday. You can read highlights from the presentation here and here.

I submitted a FOIA request to NASA for the presentation, in hopes that we could publish it. The request was denied, with NASA citing a court case that allows government agencies to withhold documents "which are part of the decision-making process of government."

Why does any of this matter? Because NASA says humans are going to Mars in the 2030s, and the public (and media) is incredibly hungry for details. The agency is riding a wave of Mars publicity right now, with the recent announcement that liquid water flows on Mars, and the theatrical release of "The Martian." It's the perfect time to talk Mars details; unfortunately, the Journey to Mars report isn't likely to placate critics that say NASA either has no plan or that the plan isn't sustainable.

That's not to say the report is without merit. Firstly, it pulls together all of the things NASA has been saying about the human exploration of Mars for a long time. That in it of itself is an accomplishment; NASA now has an official policy document with its Mars themes rolled into one.

The overall plan, to recap, is to utilize the ISS through 2024, during the "Earth reliant" phase, where astronauts are largely bound to low-Earth orbit, validating deep space technologies that will be useful in the coming decades. Next, we move out to the "proving ground"—cis-lunar space—where astronauts test out things like deep space habitats and learn how to live and work where a quick return to Earth is not an option. Finally, it's on to Mars or other destinations, in the "Earth independent" phase, where humans create a sustained off-Earth presence in our solar system.

Taken on its own, this sounds incredibly exciting. But almost immediately, people start to ask for specifics: What missions will do all these things? How much will it cost? Will we orbit Mars first, stop off at a moon, or go straight to the surface?

None of that is mentioned in the report. But NASA does lay out sets of specific decisions that need to be made to make the next steps happen:

Firstly, the chart reminds us that NASA has already made at least four decisions regarding Mars exploration: the ISS stays alive through 2024, SLS gets a better upper stage before it gets better boosters, we're choosing ARM option B, and we will need to pre-deploy cargo at Mars rather than taking everything with us.

In the next few years, NASA needs to finalize an Orion spacesuit, come up with a deep space habitat design, decide exactly how solar-electric propulsion fits into human and cargo missions, choose what robotic Mars missions after the Mars 2020 rover might assist with human exploration, and finalize what astronauts are going to do in cis-lunar space.

These are not trivial items. Behind every one of these decisions are questions of politics (which NASA centers will do these things?), industry wrangling (what companies will build the components?), and the role of international partners (how committed are other countries?)—among many, many other things.

And there even bigger decisions waiting to be made within the next decade: what the initial Mars missions will look like, how much to depend on in-situ resources, and the design of surface habitats and power generation systems.

What, then, should we make of this report? I think my colleague, Casey Dreier, may have captured it best:

@SpcPlcyOnline A plan to form a strategy for a concept.

A plan to form a strategy for a concept. It's a decidedly governmental and NASA way to do things. But if NASA is really going to put boots on Mars, this is how they are going to do it. No giant leaps; just one small step at a time.

Editor's note: To see one proposed way of getting to Mars in the 2030s, check out The Planetary Society's Humans Orbiting Mars report. It advocates an orbit-first approach, explores a sample architecture proposed by NASA's Jet Propulsion Laboratory, and shows how human surface landings could follow next. We’ll have more to say on how NASA’s latest report relates to the Humans Orbiting Mars concept this week.

Thanks for trying with the FOIA, I could tell from the NASA report that even these notional plans were more developed somewhere.

NASA needs to get more specific if they wish to stay employed. With the upcoming change in Presidential administrations it's sensible they wish to wait and see the future President's input, but establishing what the next agenda, i.e, hardware/vehicle, after building the SLS and Orion should be established even if it is just a deep space habitat/Lunar space station for the Proving Ground phase.

@Ron Ehrm, the next president, no president, will have any "input" about space. He or she won't even know where space is, and couldn't care less. NASA needs to make up their own space policy within their frozen budget.

Sadly, the USA no longer has the necessary vision and drive to get to Mars. Ever. The Chinese or Russians will be there first, and I'm willing to take any bet on that. Much as I'd love to see another "Kennedy" moment, US politics is too divisive and internally- focussed to ever achieve another major step like Apollo. I'm very sad.

"how NASA plans to land humans on Mars" -- This is a concept we don't need. I see no point at all in landing any human on Mars in the next 100 years. For the same cost, we can do so much more space exploration with robotic probes. Look how much money was wasted with the Space Shuttle and the International Space Station, all for nothing really.

@eltodesukane Meanwhile, dreams of living on Mars have fuelled a Mars obsession within NASA, directing a ridiculous share of the robotic exploration budget to the planet and thus robbing all of the far-less-understood worlds of exploration. And Mars 2020 has a chunk of its payload taken up by experiments that serve no purpose other than to maybe some day be used in a Mars habitat, and even then are of questionable value.