A few years ago, cost overruns in NASA’s science program were a significant news story. (See, for example, this post from 2009.) The major culprits were the two largest missions, the James Webb Space Telescope and the Mars Science Laboratory. Smaller missions, however, had their share of cost overruns, too. At one point, for example, NASA cancelled the Dawn mission to the asteroids Vesta and Ceres because of overruns in that mission’s budget. (Fortunately, NASA reconsidered and re-instated the mission.)

For the last several years, Congress’ General Accounting Office annually has reviewed budget performance on selected NASA missions. The most recent report got me to relook at cost overruns in NASA’s Planetary Science program. The news is good, but as so often happens, the good news appears to come with a tradeoff. 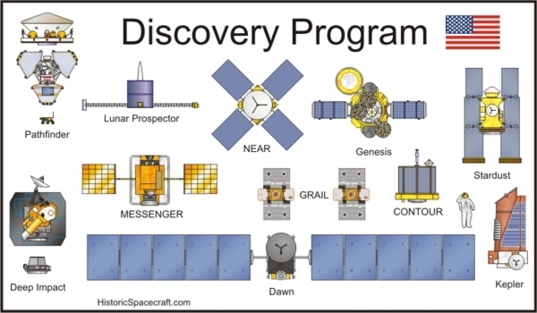 The missions of the Discovery program have visited a wide-range of solar system destinations. These missions also have had a range of cost under- and overruns. Image from Historic Spacecraft and used under a creative commons license.

Let’s start by looking at the trends. Prior to about 2002, some planetary missions came in under budget, others were less than 10% over budget, and two were more than 20% over budget. (Two of the four missions that came in under budget failed.) Then, in the mid-2000’s, all missions were more than 19% over their initial estimates. The Curiosity Mars Science Laboratory began development in 2004 with a planned launch in 2009 (later slipped to 2011). This mission had the largest absolute and percentage cost overrun since the mid-1990s. It was towards the end of this period that then NASA science administrator Alan Stern made eliminating cost overruns a central focus. 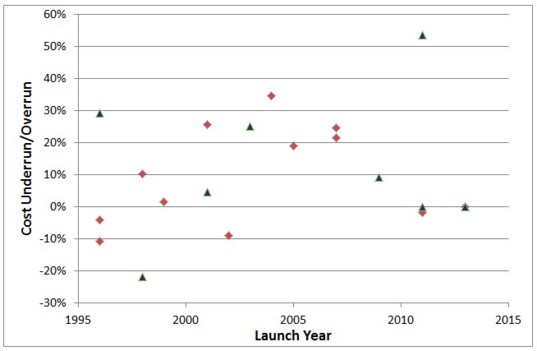 Mission cost under- and overruns over time

Trends in NASA planetary mission cost under- and overruns. Points in red indicate missions in the Discovery and Mars Scout programs (<$500M for the spacecraft) and all other missions are in blue. Data used is shown at the end of this post.

Following this period, cost overruns all but disappeared. For missions launched in the last few years, four missions have stayed within their initial budgets and a fifth was less than 10% over budget.

(I was unable to find any information on the Mars Phoenix, Pluto New Horizon, or the Mars Reconnaissance Orbiter missions’ performance against initial cost estimates. The lack of news probably indicates that these missions stayed within budget.)

I hope that the President’s budget office and Congress – which decide whether to reward NASA with funds for new missions or not – take note of this recent accomplishment. NASA’s Planetary Science Division recognized a problem and appears to have dealt with it. Unfortunately, I fear that that NASA’s reputation in the near term will be stained by the large overruns in the two flagship programs, MSL and JWST. Space News reported in January, that future astronomy missions may be limited to approximately $1B, ending a long run of >$1B flagship astronomy missions. I also wonder how much of the President’s budget office’s refusal to allow development of a Europa mission (estimated $2B) stems from reluctance to trust NASA again on a large science mission.

I also worry about a possible consequence of managing to budget. Boldly doing new things brings with it the risks of busting budgets. Look at the string of missions starting in the mid-2000’s that exceeded budgets by 19%+: the Mars Spirit and Opportunity rovers, the Mercury MESSENGER orbiter, the Kepler exoplanet telescope, the Dawn asteroid mission, and the Curiosity rover. All required new designs and often significant technology development to achieve their goals.

The easiest way to stay within budget is to push the envelope as little as possible. The Mars MAVEN mission returns to the Red Planet and reuses substantial portions of the Mars Reconnaissance Orbiter’s spacecraft design. The recently completed lunar GRAIL gravity mapping mission largely reused the spacecraft design of the similar GRACE terrestrial mission. The 2020 Mars rover mission will reuse the design of the Mars Curiosity rover. The recently selected Mars InSight lander largely reuses the design of the Phoenix lander.

InSight’s competitors for selection, by contrast, would have required new designs to either hop across the surface of a comet or to land on a Titan lake. When NASA selected the InSight mission, its managers emphasized that the science potential of the three were all high, but that the InSight mission had the lowest development risk.

Out of the last nine NASA planetary missions launched or selected for future launch, only two would go to a destination other than the moon or Mars. This followed a previous string of missions to comets, asteroids, Mercury, and Pluto as well as Mars and the moon.

Managing the tension between fiscal responsibility and doing new things is difficult, but perhaps doable. The New Frontiers program Jupiter Juno and Pluto New Horizons missions both will boldly go to new destinations. Both also appear to have done so while staying within their development budgets. However, both also are among the more expensive missions on the list below. Perhaps bolder missions require larger budgets.

Or perhaps significant new designs would benefit from longer early design phases than is typically done. After design began, the Juno mission was delayed approximately two years because of other budget issues at NASA. At one meeting I listened to, it was stated that the design team put the extra time to good use maturing the design and reducing implementation (and budget) risk.

It's also likely that NASA and principal investigators have become better at understanding the kinds of missions that are capable in cost-capped programs such as the Discovery program. The early Discovery missions came in under or near budget. Then there were a string of more ambitious Discovery missions that came in significantly above their initial estimates. The last four Discovery and Mars Scout missions appear to have returned to staying within their budgets.

In two years or so, there will be a mid-term assessment of NASA’s performance against the recommendations of the Planetary Decadal Survey that established NASA’s planetary exploration goals. The budget assumptions in that Survey turned out to be wildly optimistic, and therefore NASA’s capacity to robustly fund missions to new targets was greatly diminished. I hope that the mid-term update to the Survey will address the proper balance between fiscal responsibility and enabling more frequent exploration of the rest of the solar system beyond the moon and Mars.

In the meantime, NASA’s management team is to be commended for managing recent missions to budget. Absorbing the budget cuts being imposed on the Planetary Science Division would be much harder to do if one or more of the current missions in development were seriously over budget.

Whenever possible, I used mission cost data from either the National Academies Press Principal-Investigator-Led Missions in the Space Sciences (2006) report or data from the Series of Government Accounting Office assessing NASA’s management of selected projects (downloadable from this link). For the GAO reports, I compared the earliest firm project cost data with the last reported cost data to compute change. When these sources failed, I used Wikipedia or press accounts. For several missions, I was unable to learn whether there had been any significant cost overruns (absence of news probably means there wasn’t any), and I left those columns blank. It was not always clear from the data sources whether or not mission costs included launch costs.

If any of you have better data for any mission, please send it to me and I’ll correct this post.

If the Mars Science Laboratory is excluded from the list, there is no relationship between final cost and percentage change compared to initial estimated costs. Because MSL’s cost lies well outside the range of the other missions, it should not be used in an analysis of trends with these much less expensive missions.

There is debate as to when the initial budget for MSL became firm and therefore should be used as the basis for comparison. I used as the initial cost the budget from the 2009 GAO report.

How much money is spent on animation?