The OTES instrument installed on the science deck of OSIRIS-REx. The optics are protected by a mylar cover to prevent contamination during ATLO processing. 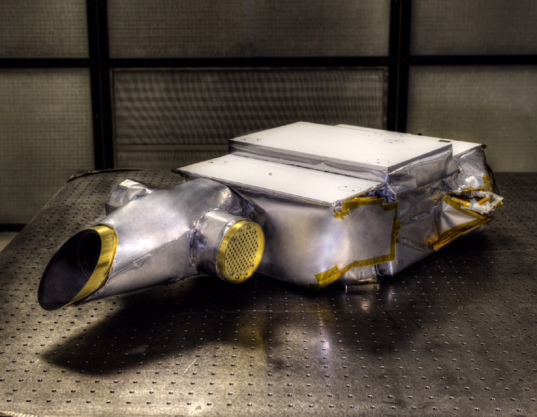 The OVIRS flight unit, prior to integration onto the spacecraft.

Next on the spacecraft was the completed Sample Acquisition and Return Assembly, SARA for short. SARA is a standalone panel that contains the TAGSAM sampling mechanism and our Sample Return Capsule. These mission-critical items are first mounted onto their own panel before delivery to the spacecraft. This panel allows the two items to be properly aligned relative to one another, since they are involved in an important hand-off: TAGSAM must place the sampler head into the SRC capture ring, then detach the head for stowage and Earth return. This transfer, along with all the other motions that are required for sampling and stowage, are tested on the SARA panel assembly, prior to delivery to the spacecraft. Once the unit was complete, the entire panel was lifted by crane and set on top of the spacecraft science deck. 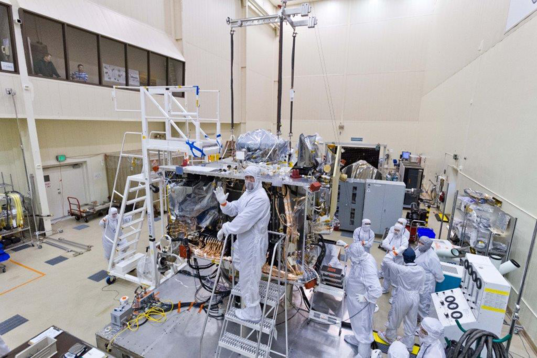 Installing the SARA panel on OSIRIS-REx

The SARA panel, containing both TAGSAM and the SRC was installed on the OSIRIS-REx spacecraft this month. Note the harnesses dropping the panel in. The SRC and TAGSAM are bagged to maintain cleanliness and ensure return of a pristine sample. The third-floor viewing gallery is visible in the upper left of the image. This location is where I do most of my viewing of the spacecraft build activities.

The other big activity this month was a fit check of the solar arrays. The arrays are large and, in general, block access to the interior of the spacecraft. For most of ATLO processing, they remain off the spacecraft in their own holding rack. However, the arrays need to be checked to make sure that the mechanical and electrical interfaces were built to design specifications. This week, one of the arrays was lifted by crane over to the spacecraft and installed. Everything went well with the fit check and the arrays are safely back in their storage location. The team is comfortable that they were built properly and will provide plenty of electricity for OSIRIS-REx during his long journey through space. 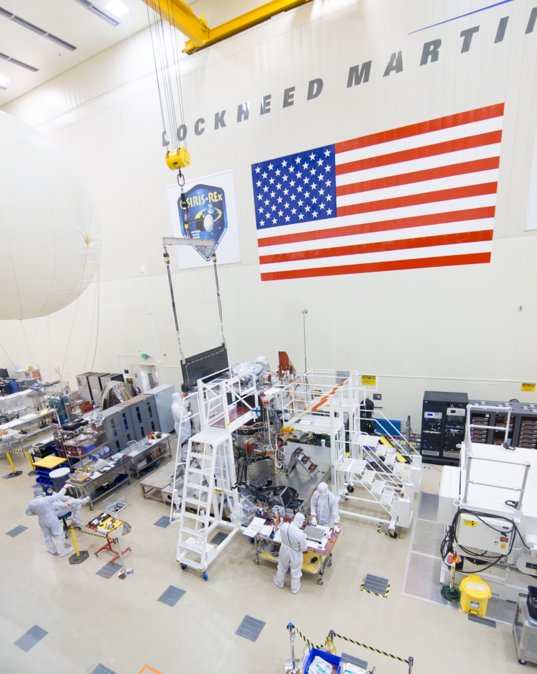 One of the solar arrays was lifted by crane over to the main spacecraft to ensure that it was built properly and could be installed.

The most exciting event this week, at least for me, was the installation of OCAMS. Over the past four years I have watched OCAMS development down the hall from my office at the University of Arizona. OCAMS completed environmental testing and calibrations this month and was shipped out to Lockheed Martin. Prior to leaving Arizona, they posed for a family portrait during a media-viewing opportunity.

The OCAMS family portrait: PolyCam is front and center, MapCam on the left, and SamCam is poking out from behind PolyCam on the right. 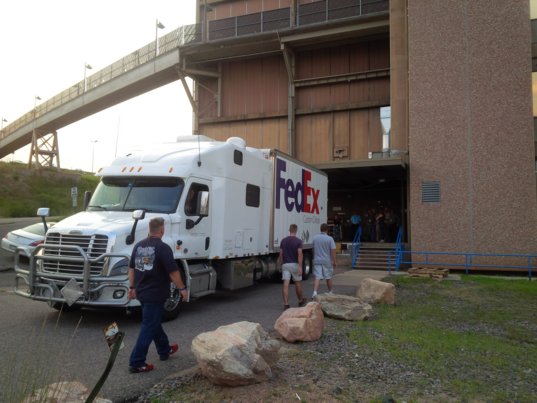 How do you ship a $40M trio of space cameras? – by FedEx of course! OCAMS arrived safe and sound at the Lockheed Martin loading dock.

On August 27, 2015, I was delighted to watch the installation of OCAMS on the spacecraft. I tweeted about the process throughout the day – providing updates when each camera went on. I gathered with other members of the OCAMS team on the third-floor viewing gallery at Lockheed Martin to watch the cameras get on board. The only tense moment came when PolyCam was lifted up the ladder – this is a big camera and is only made heavier by its “Iron Man” suit of protection. These red components cover all of the optical elements for the three cameras – preventing dust and other contaminants from degrading the optical performance during ATLO. They will be removed prior to encapsulation in the launch vehicle fairing. 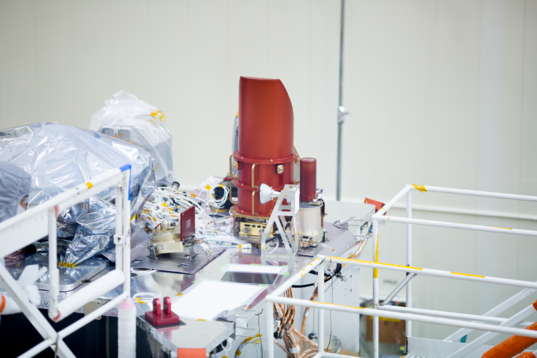 OCAMS on science deck of OSIRIS-REx

OCAMS made it on the science deck of OSIRIS-REx with no issues. SamCam is on the left, PolyCam in the middle, and MapCam is on the right. Note the protective red covers on each unit. These will be removed before flight. The large red cover for PolyCam has been affectionately nicknamed the “Iron Man” suit. The SRC and the TAGSAM launch container are visible along the left edge of the image as well.

All in all it was flawless installation, with the three cameras and the control electronics making it on the spacecraft well in advance of when we originally planned these activities. In general, the OSIRIS-REx ATLO flow has gone smoothly. We are very close to completion of the spacecraft. System-level environmental testing should begin in October – stay tuned for more updates on the development of this awesome spacecraft!

Wow, thanks for the update. It's really starting to feel like launch day will be here in hardly any time at all :) (In the 'solar array fit check' image there appears to be a large, white, presumably He(?) balloon over on the left... I can't help but wonder what it is exactly and what it's for... does anyone know?)