Yesterday, the OSIRIS-REx mission passed another major milestone – successfully completing Key Decision Point “D” (KDP-D). This decision point is one of five key milestones that we pass through leading up to launch. KDP-D occurred after we had completed a series of independent reviews that cover the technical readiness, schedule, and cost of the project. The final technical review was our System Integration Review, where our Standing Review Board evaluated our readiness to move to this next phase. The KDP-D milestone involved a detailed briefing to the Science Mission Directorate Program Management Council on the ninth floor of the NASA Headquarters building in Washington DC. The objective of this review was to evaluate the readiness of the OSIRIS-REx Project to end Phase C (the detailed design phase) and proceed to Phase D – commonly referred to as Assembly, Test, and Launch Operations (ATLO). Basically, this means that we have approval to build the spacecraft, install the science instruments, put the system through a series of environmental tests, then ship it down to Cape Canaveral in Florida for integration with our Atlas V rocket. 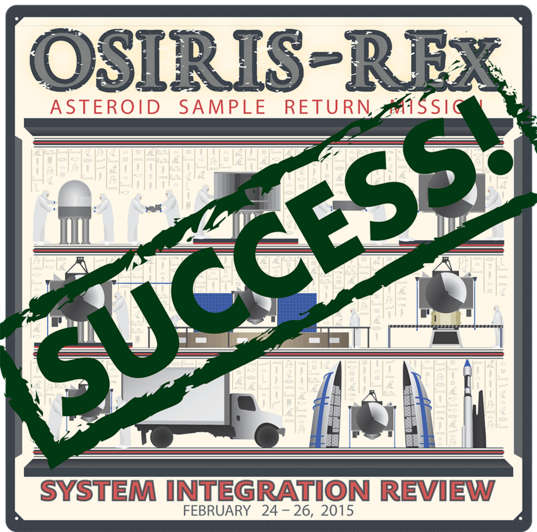 The System Integration Review was the last major technical review leading up to the KDP-D decision.

Our assembly, integration, and test processes bring together all subsystem elements to build the complete OSIRIS-REx spacecraft. We then perform a series of rigorous tests to verify that the spacecraft has the required performance to complete our Design Reference Mission. 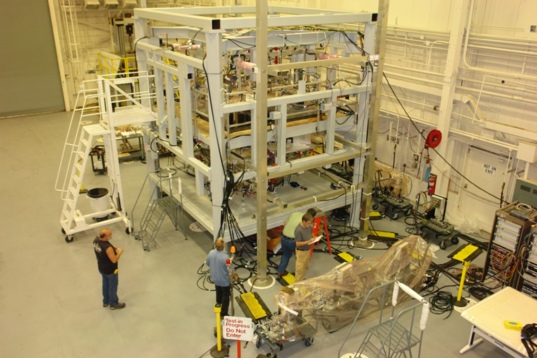 Assembly of OSIRIS-REx started with completion of the spacecraft structure – shown here in the static test fixture in September 2014.

Flight system assembly and integration begins with delivery of the primary structure with a complete propulsion subsystem to the ATLO team. Once in ATLO, the next component that is installed on the spacecraft is the harness, which is the collection of all the cables and wires that connect the different components on the spacecraft to each other, allowing transfer of power and data. 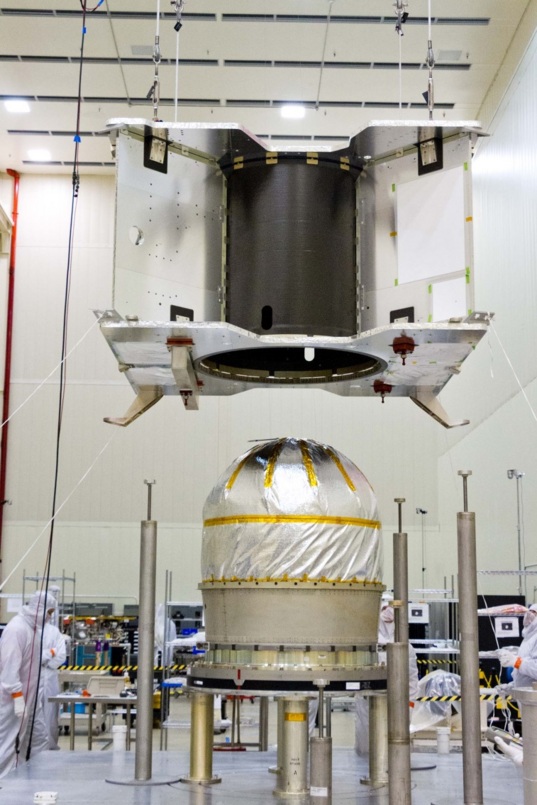 Once the structure was built and tested, it was integrated with the main propellant tank in December 2014.

The next steps are installation of the power system followed by the spacecraft computer running an early version of the flight software. After that, the other components are incrementally installed on the spacecraft and electrically tested. 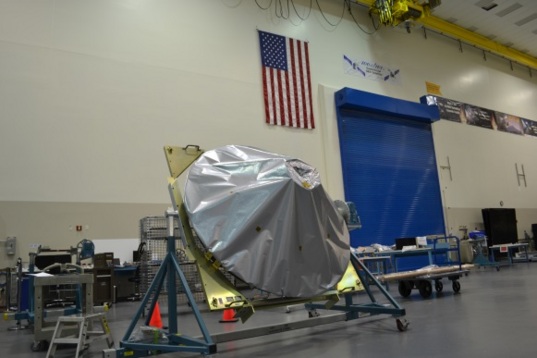 The OSIRIS-REx high-gain antenna is on dock at Lockheed Martin and awaiting integration onto the spacecraft.

To complete the spacecraft build, we will install the TAGSAM sampling mechanism, the sample return capsule (SRC), and our science instruments. Finally, the solar arrays are installed, aligned, and electrically verified to complete the flight system integration. 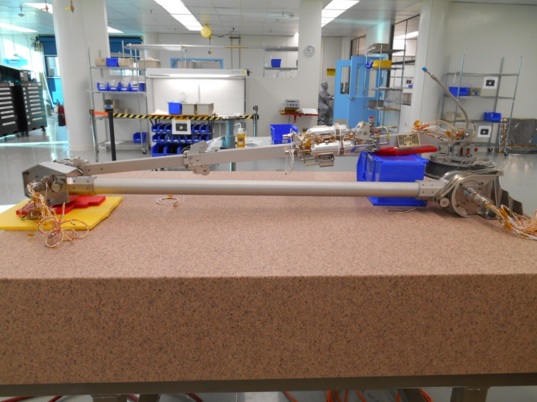 The TAGSAM unit is built and undergoing subsystem level environmental testing – prior to being integrated onto the spacecraft.

Once the entire flight system is complete, we begin system-level testing. These initial tests establish the pre-environmental-testing performance baseline. We perform these mission-phase System Verification Tests (SVTs) to verify that the spacecraft can perform all functions required by the Design Reference Mission. The same people that will perform mission operations generate the command sequences implemented during these tests using flight system hardware and software elements operating in a full flight-like mode.

To certify that the flight system (the spacecraft combined with the science instruments) can successfully operate in space, we have developed a series of environmental tests based on mission requirements and our knowledge of our target asteroid, Bennu. The spacecraft environmental test program includes acoustic tests, pyro shock tests, vibration tests, electromagnetic radiation tests, and thermal vacuum tests. These tests are all designed to simulate the harsh environments that OSIRIS-REx will experience on the rocket ride into space, during operations around Bennu, and during re-entry of the SRC. 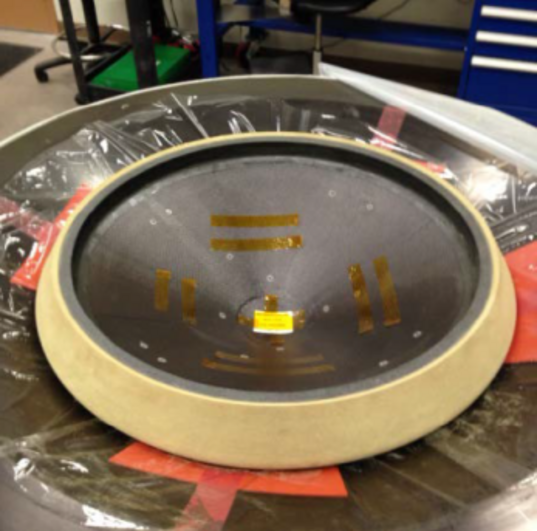 The heat shield is built and ready for integration with the rest of the SRC components.

We will also perform a series of mechanical functional tests to demonstrate that all of our components will move as needed. These include: solar array release and deployment, SRC open and close operations, TAGSAM head capture in the SRC, SRC separation from the spacecraft for Earth return, TAGSAM release, extension, and head release from the TAGSAM arm. 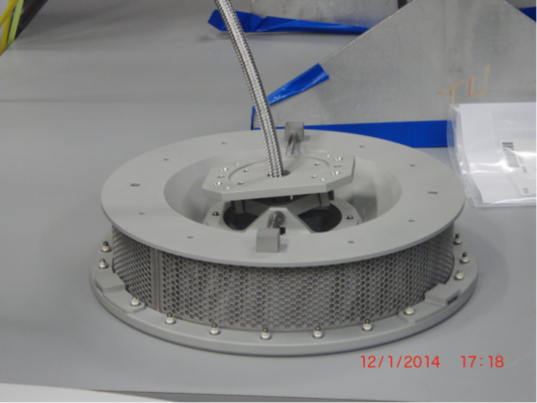 The flight unit of the TAGSAM head is built and has demonstrated its ability to collect abundant asteroid regolith.

Pyro shock tests are accomplished by firing all retention and release devices on the solar arrays and TAGSAM, firing the separation bolts and tube cutters of the TAGSAM head for capture in the SRC, firing the bolts for SRC release, and firing those required for separation from the launch vehicle interface. Each of these events sends a shock wave through the spacecraft structure, which all components must be able to withstand. 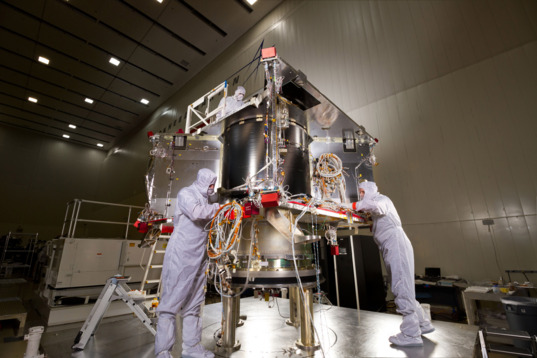 In a clean room facility near Denver, Lockheed Martin technicians continue assembling NASA’s OSIRIS-Rex spacecraft that will collect samples of an asteroid.

Following this exhaustive set of environmental testing, we repeat our series of SVTs to reconfirm spacecraft health and performance and demonstrate that no components were damaged by the tests. Flight system spin-balance and final mass properties measurements close out testing at Lockheed Martin prior to shipping the flight system to the launch site.

Launch site operations for the spacecraft and instruments occur at the Kennedy Space Center. These operations including monitoring flight system health and performing required spacecraft fueling and maintenance operations. Once the spacecraft is fully fueled, we encapsulate it into the launch vehicle fairing then stack the entire assembly on top of the first and second stages of the Atlas V rocket. These activities lead up to our big day – when we fire up the main engines on the rocket and send OSIRIS-REx on his journey to Bennu and back!